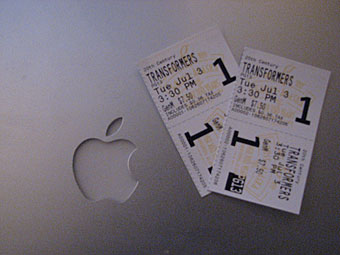 I picked up my Transformers movie tickets last week. Tuesday afternoon is the first showing of the movie here in Juneau AK and that’s the tickets I Got. By boss has been warned I will be taking the afternoon to go see this film.

I am both exited and upset about it. This movie has been something I have waited for since I was 4 years old. I watched Transformers on TV all the time in the 80’s and as I got older i collected the comic books. I know the Transformers mythology like the back of my hand. So if something does not go like it’s supposed to in this film it is going to stick out like a sore thumb to me.

Michael Bay directed this film. That alone makes a lot of core Transformers fans flinch. A lot of us fans followed as much about this film as we could on line. I think we were all pretty vocal about what we were expecting to see out of this film. (The producers of this film and even the Director asked us on line want we wanted to see.) As each day went on we are coming to realize that they are not making a film that the fans want to see. Bay was just making a film he wanted to make.

For the last year or so we have slowly seen new Transformers move trailers hit the net. As I watched each one as they came out it became quite clear that Michael Bay was not listening to fans, did not care about the Mythology, or even held a Transformers comic book in his hands. He clearly does not understand why the franchise is so popular to warrant a movie. I think he was just happy to have work after Pearl Harber bombed.

But here i am. With two movie tickets to see the first showing of Transformers in Juneau. I am in denial. I think that maybe. Just Maybe i am wrong, That maybe this movie will not be as bad as i am predicting. I truly hope it is not.

If anyone is interested i have been documenting a lot of what has been going on with this movie over at AppleGeeks.com. You can read my posts on their forums by clicking here.