What of Optimus Prime? What of Hi-Q? What of the Dinobots? What of Cybertron? Will find out as I crack open issue 76. But first, Lets check out this cover. 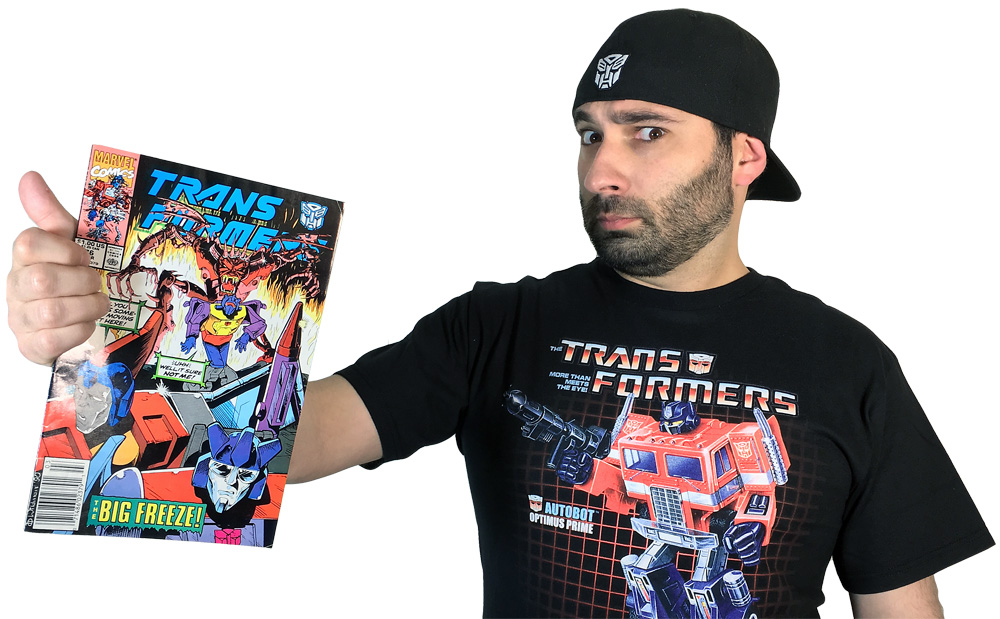 Firs thought after looking at the cover for issue 76? Hey, Marvel found a printer that can do more than a hand full of colors! Welcome to the modern era Transformers Fans. THis is a rich an full looking cover drawn by Andrew Wildman.  The cover features three Dinobots with Grimlock looking as if he is ready to piss himself with fear over the demonic robot looming up from behind him. It’s silly and hard to make sense of. “I tell you there is something moving out here!” is spoken by Swoop. “Uhh, well it sure not me!” responds Grimlock. At the bottom of the cover is written, “The Big Freeze” The usual Marvel box in the upper left hand corner has been replaced. Where normally you would see Optimus Prime, you know see the remains of Optimus after his altercation with Unicron. It’s pretty gruesome to look at. 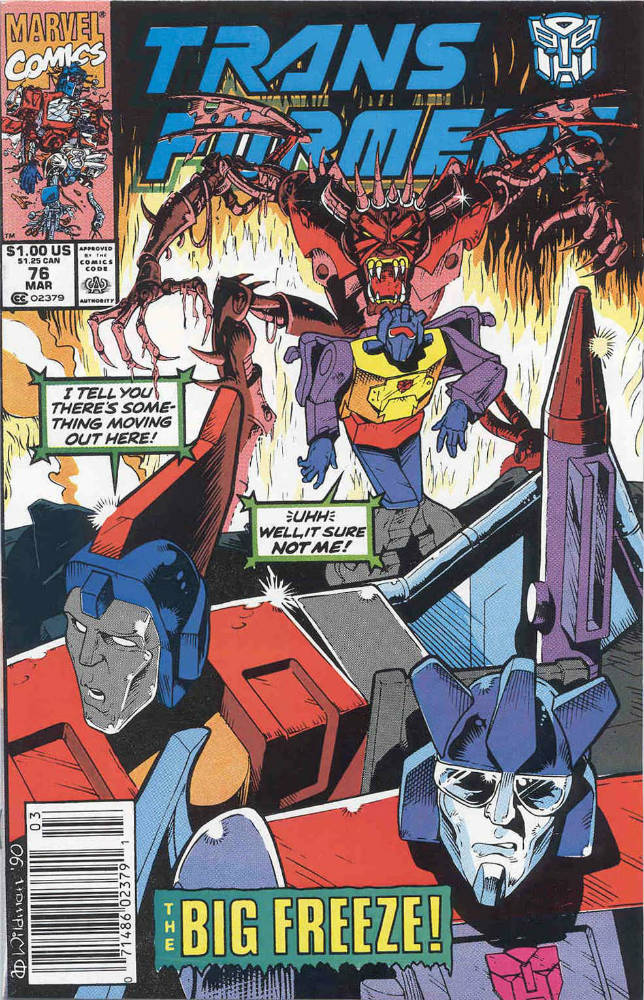 We open up to a group of Transformers huddling around the body of Optimus Prime. It’s realized he is still alive, if only just barely. Prime’s last words to Prowl are to make Grimlock leader of the Autobots.

Somewhere else on Cybertron, Hi-Q is running for his life. He is driven to get back to Optimus Prime to tell him of the changes they are both going through thanks to the Powermaster process.

Back to Prowl. He tells Grimlock that he is the new leader. Grimlock’s response is not what Prowl was expecting so Prowl blows up at him. In Grimlock’s broken english, he puts Prowl in his place and displays true leadership knowledge. Grimlock and the Dinobots proceed out to find the Ark and revive the remaining Autobots with Nucleon.

Searching for the Ark, Grimlock’s body seizes up on him. He’s rendered unable to move, but can still speak. Hi-Q appears with demonic looking bots hot on his tail. Surrounded, the dinobots wage a battle rather then to leave Grimlock alone. 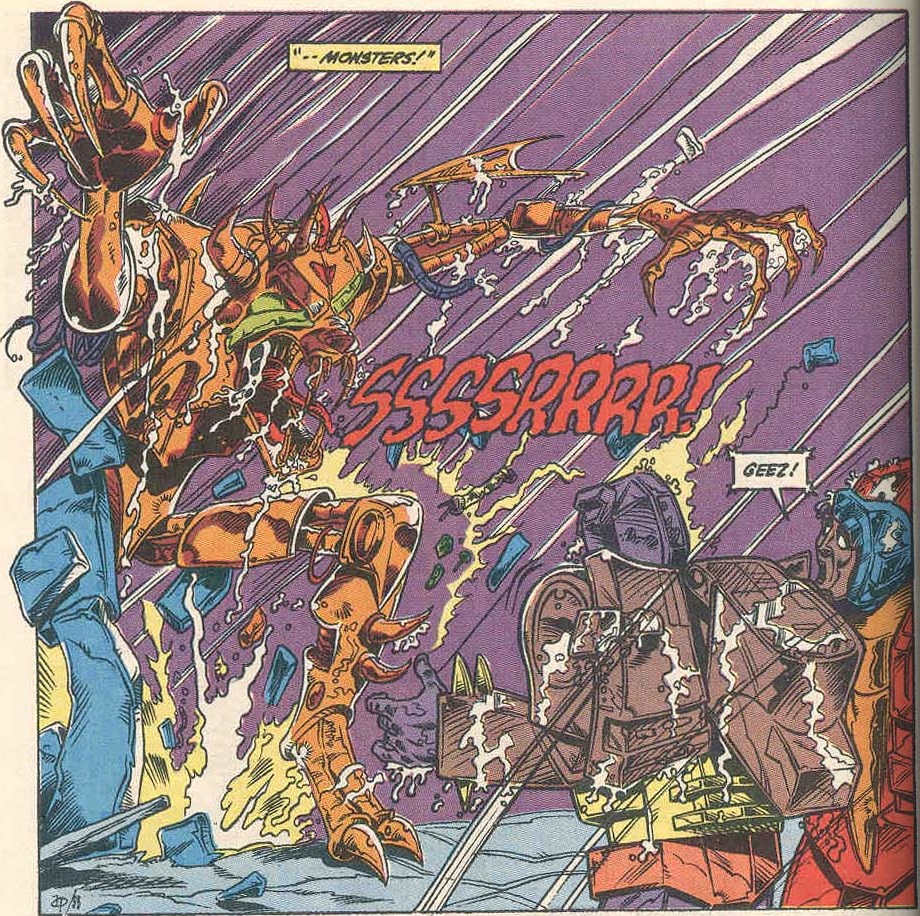 Next we are taken to the Ark, where Schockwave and Starscream are repairing the damaged space craft. The logic being that the Ark is the best and fastest ship to use to get back to an unprotected Earth.

Back to the Dinobots. The demonic robots keep coming at the Dinobots in larger numbers. Even with an order to flee from Grimlock, the Dinobots hold their ground. Hi-Q sees something new in Grimlock. A building of energy. Using some special abilities, Hi-Q is able to speed up this process of energy that Grimlock is going through and in a short time Grimlock bursts out of his old body shell and reveals a new Action Master mode. With new strength, Grimlock is able to scare away the Demonic robots.

Grimlock shares that with his new power came with a price. He can no longer transformer. And then, rather abruptly, Hi-Q shares that he is Optimus Prime and the comic ends without warning. 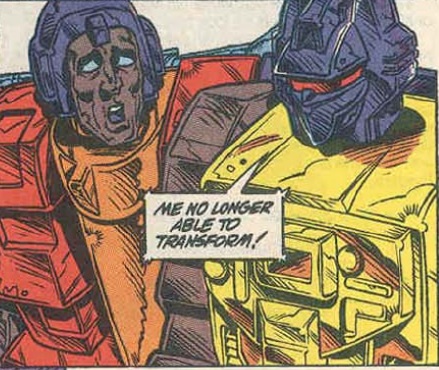 Well things are different. Optimus Prime appears to be dead. Grimlock can’t transform. Hi-Q has an odd new power that I don’t recall ever seeing before.

The ending was very abrupt. I had to check my issue to make sure a page wasn’t torn out and missing. Just an out of place ending for me. Normally, the endings are more gentle.

I also wonder why they don’t just put the title of issues on the cover. Why give it a sub-title or a secondary title?

Regardless, this was a good issue. It’s going to clearly take another issue or two for all the fall out from issue 75 to be explained. But I’m enjoying the story and still looking forward to the next issue.

What did you think of this issue? Where you as annoyed and perplexed by Hi-Q’s new power as I was? Let me know.