Marvel’s Transformers issue 72 is here. It contains a great story, great art, and an epic fight.  I know that in recent reviews I’ve been super excited to keep reading. To get on to the next issue. My excitement is due in part to the writing. The great new stories that have started to be told. It’s also fair to say that my excitement is also due in part to the fact that I can see the of the story coming up with issue 80. Something my younger self had no idea was coming. As much as I’m excited to get to the end and find out what happens. Each issue is also making me sad for the same reason. I have a lot of hope that I’m going to have a good ride between now and issue 80. Issue 72 does not disappoint. But first, lets check out this cover! 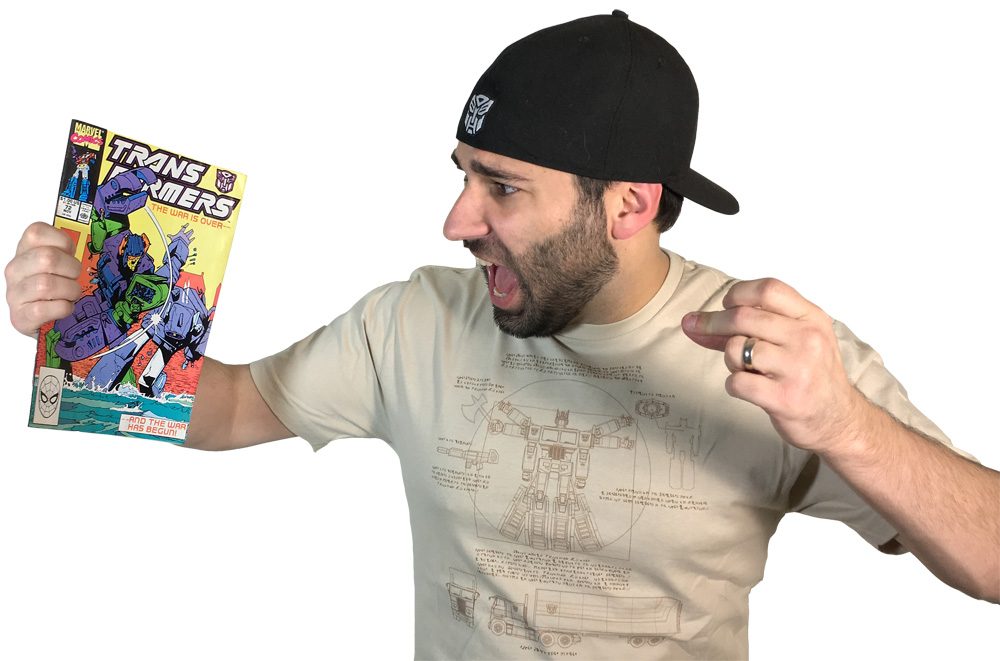 Front and center we have an extremely upset looking Scorponok raging out on Shockwave with his claws. Both bots seem a little worse for wear with all the nuts and bolts and bits and bots falling off of each other from their battle. The flat looking city seen in the background. The war is over–and the war has begun!” is written on the cover. The bots as well as the water they are fighting in are rendered rather well and the cover does a good job conveying energy. The flat yellow background and flat red city behind them hurts the cover more than helps it. It almost seems to absorb any visual energy the fight scene is trying to get across to its reader. 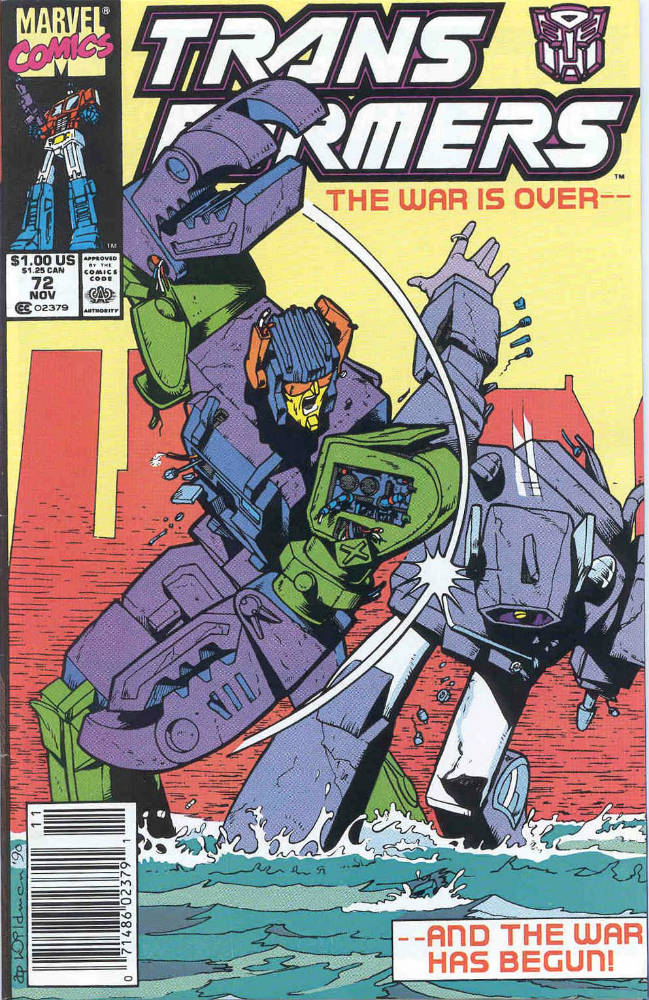 Starscream is very happen as we enter issue 72. He and is fellow Decepticons have done well destroying Scorponok’s base of operations. But not everyone sees eye to eye with Starscream. Fearing survivors and retaliation, Starscream starts digging through the fallen building looking for survivors and he finds one. Scorponok. 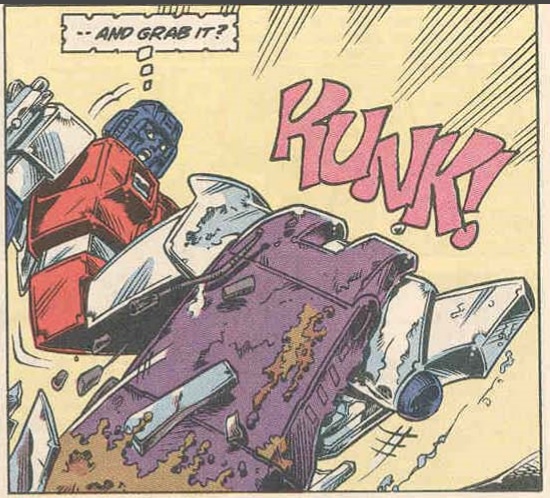 Further underground. Powermaster Optimus Prime watches as Decepticons ready themselves for battle. With worry that his alliance with Scorponok no longer exists he worries that the Decepticons will get caught up in another war. Prime gets Kup and Hot Rod to help him search for other Autobot survivors in the rubble of the Decepticon base. 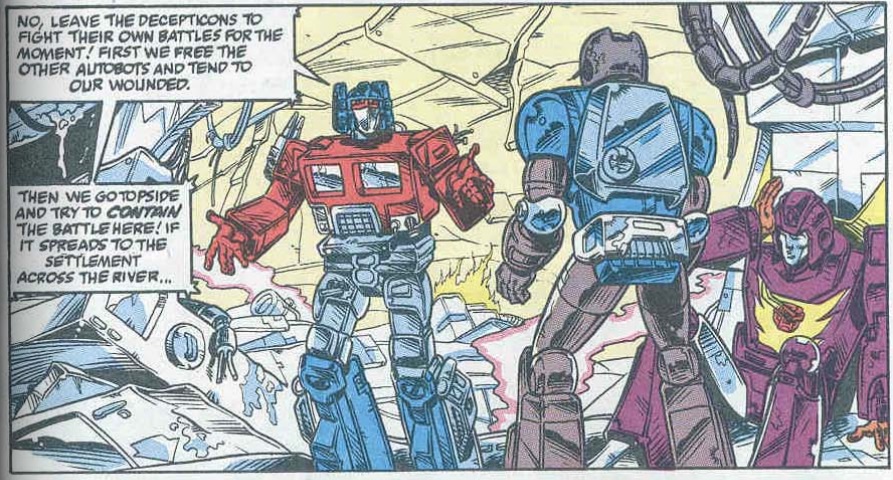 Above ground, Scorponok makes quick work of Starscream and his minions as he begins his battle with Shockwave. The fight carries over to the river and to Manhattan. All the while Shockwave is talking Logic which gives Scorponok the upper hand in fighting the logical bot. 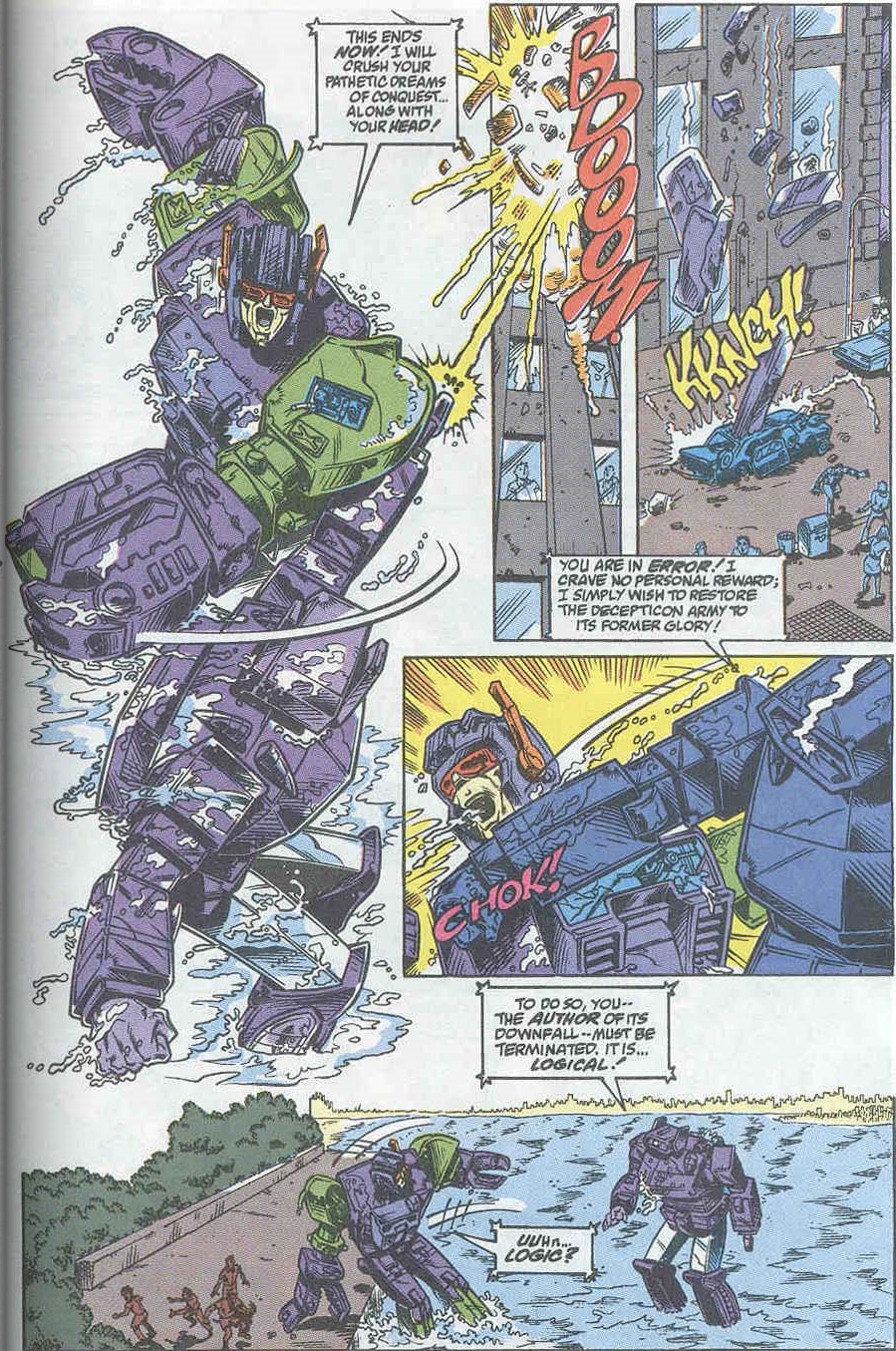 I had to share this whole page of the Scorponok and Shockwave battle because the art, imagination, and all together execution are just breath taking.

Here we cut deep into the depths of the planet Cybertron where Emirate Xaaron is on the run from Galvatron. The Autobot is quickly caught. To Xaaron’s surprise, Galvatron reveals that he wants to stop Unicron just as much as Xaaron does.

Scorponok takes down Shockwave. Optimus Prime arrives to keep Scorponok from straight up killing Shockwave. To complicate matters, G.B. Blackrock’s arrives on the scene with his new team of superhumans who are calling themselves ‘The Neo-Knights’.

We had a lot going on in this issue. Some things I didn’t even talk about so you can enjoy reading it yourself and discover something new.

The story and the art where top notch here. Shockwave is not acting (and hasn’t been acting), like the bot I’ve known him to be. He’s two calculating? He’s like an evil Mr. Spoke who is getting so worked up in how unflawed his logic is that he is distracted by it’s perfection.

In all the cool stuff that happened in this issue, The Neo-Knights bother me. Is adding an human element beyond Spike and Buster going to hurt the story. I generally wouldn’t think this, but we have humans with special powers. Spider-Man making an appearance is one thing. Adding brand new mutated humans into the mix is a whole other. Having humans in an issue was something Bob Budiansky was good at. I hope Simon Furman is too.

What did you all think of this issue? 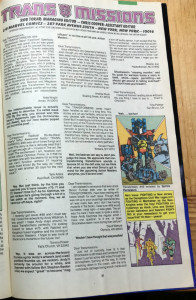 Stupendous! Wow! Excellent! Spectacular! The story was great, the art was great! What more could I ask for (except the return of Blaster and Ratbat!)? Thanks especially to Simon for not one, not two, but FIVE storylines in one issue! Storyline 1-Grimlock travels to Hydrus Four to revive the Dinotbos. Storyline Two-Galvatron is brought to 1990 by Unicron, who is plotting the destruction of Cybertron. Storyline 3-Optimus Prime prepares to join forces with the Earthbound Decepticons. Storyline 5-The weirdest one. Ratchet and Megatron combined into one Transformers! I’m sure that eventually all these events will run into one another, causing an indescribable issue!

The indescribable issue is actually quite easy to describe. It’s called issue #75! By the way, you almost won this issue’s Hyperbole (get the dictionaries out) Award, but our next reader pipped you out at the post…

I recently got issue #69 and I must say that I loved the artwork by Andy Wildman. It was great! I hope Andy stays around; he draws Transformers perfectly. I’m looking forward to issue #70, with Ratchet and Megatron fused together and the coming of the Action Masters. I hope to see more of Blackrock’s mutants in the future, too!

Yep, it was an across-the-board thumbs up for Andy’s artwork (and a well justified thumbs up, we reckon). Andy’ll certainly be around for a while, and (teamed with fellow Brit Stephen Baskerville) we expect “great” to become “magnificent” in no time at all! Ah yes, Action Masters…

The TRANSFORMERS comic hasn’t been handled so well in a long time. The stories and art are fantastic, and so far I’m very pleased with everything that’s been done! But I’m asking you not to ruin all this by having any of the Transformers become Action Masters! Because, if the comic version is going to be anything like the Action Masters figures, this will result in the Transformers losing their ability to transform. And to me, the concept of Transformers that cannot transform is utterly pathetic!

Well, the best we can say is, don’t prejudge the issue. We appreciate the nontransforming Transformers sounds a teensie bit on the daft side, but we think that when you see what Simon’s got in mind for the upcoming Action Masters storyline, you’ll be won over!

I am pleased to announce that ever since Simon Furman took over as writer of TRANSFORMERS, I have been waiting with bated breath for each issue. Though #68 was not up to your usual high standards (the art was really bad, and I don’t like having mutants in the book), I was sure #69 would be better. I was right-it was great. The art was the best I have seen in quite a while. I hope Andy becomes the regular artist! I have one question. Is it me, or does Shockwave seem more boring than before?

Wouldn’t have thought that was possible!

Just out of curiosity, how is it that Shockwave is still intact and functional? One doesn’t just fall some 400 miles through the atmosphere, burning all the way, to come crashing down in the ocean, with the only noticeable damage being scorched marks and a torn-off audio sensor. I can accept that his titanium-reinforced electro-watchamacallit armor protected him somewhat, but really! So, we must ask, what exactly happened to Shockwave after he was blasted by Spike? What I’m getting at is that there is what I call “plot thread potential” here. I hope you decide to use it.

Shockwave’s “missing months” and his quest for warriors forms a story in itself, which-space permitting-we should get around to telling eventually (but don’t hold your breath!)

I have just finished reading issue #69 and the one thing I have to say is… THAT’S GROSS!!!