We’re at issue 70 day. We’re so close to the end and I’m not ready for that to happen. I wonder if anyone at Marvel, Hasrbo, or any fans see the end in sight? I don’t think so. Maybe at this point in the run it’s better the fans be unaware of the end. That way they can enjoy the comic book with out any worry. So lets do this review. But first, what a cover! 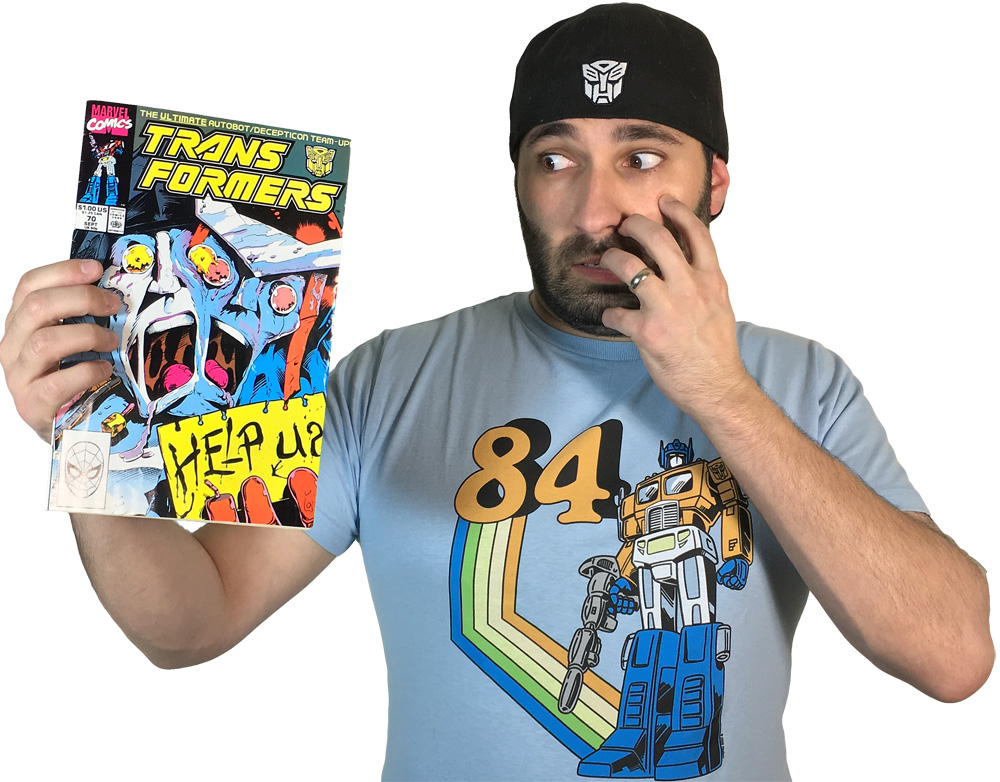 The cover for Transformers issue 70 is shocking to look at, but also beautiful done. Andrew Wildman did this cover and he did it well. This cover is a perfect example of why in the comic book universe of Transformers, he is a fan favorite. The cover is dominated with the painfully looking hybrid face of Megaton and Ratchet. If there was any question in the readers mind of these two being in pain, it is spelled out for them on a note card reading “Help Us” that is held by the combiner. (Sorry, Couldn’t help myself.) Just above the Transformers logo is written, “The Ultimate Autobot/Decepticon Team-Up! Now, lets see what this issue is all about. 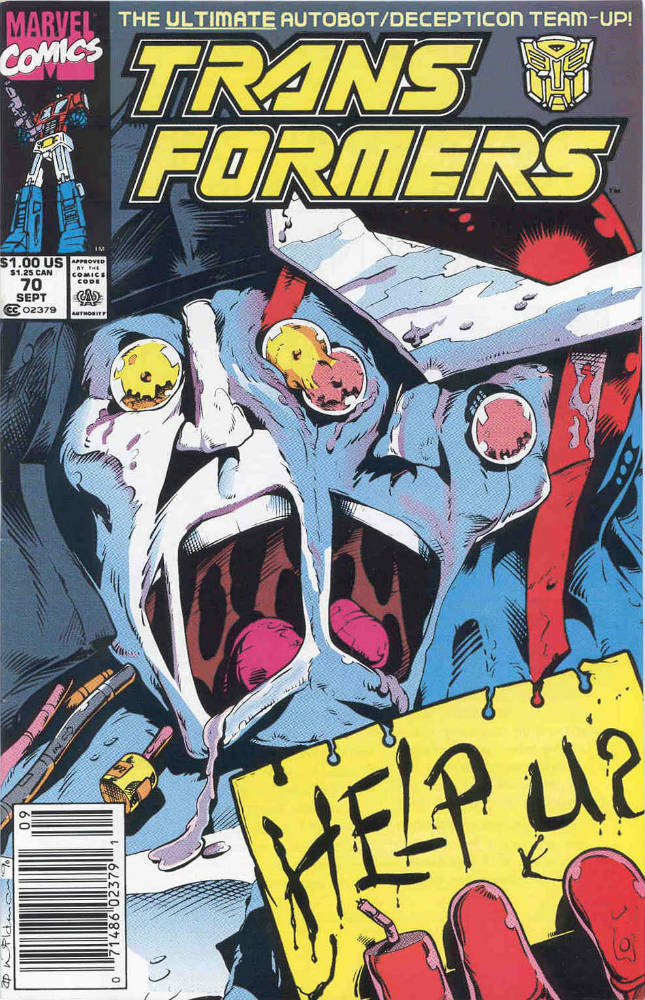 The only panel of page one, in a way, shows the reader something worse than they could have imagined. The hideous combination of Megatron and Ratchet standing before them. Clearly their trip to the unspace was not a pain free experience as depicted by the looks of agony on their faces. The Autobots present in the room look on in shock. 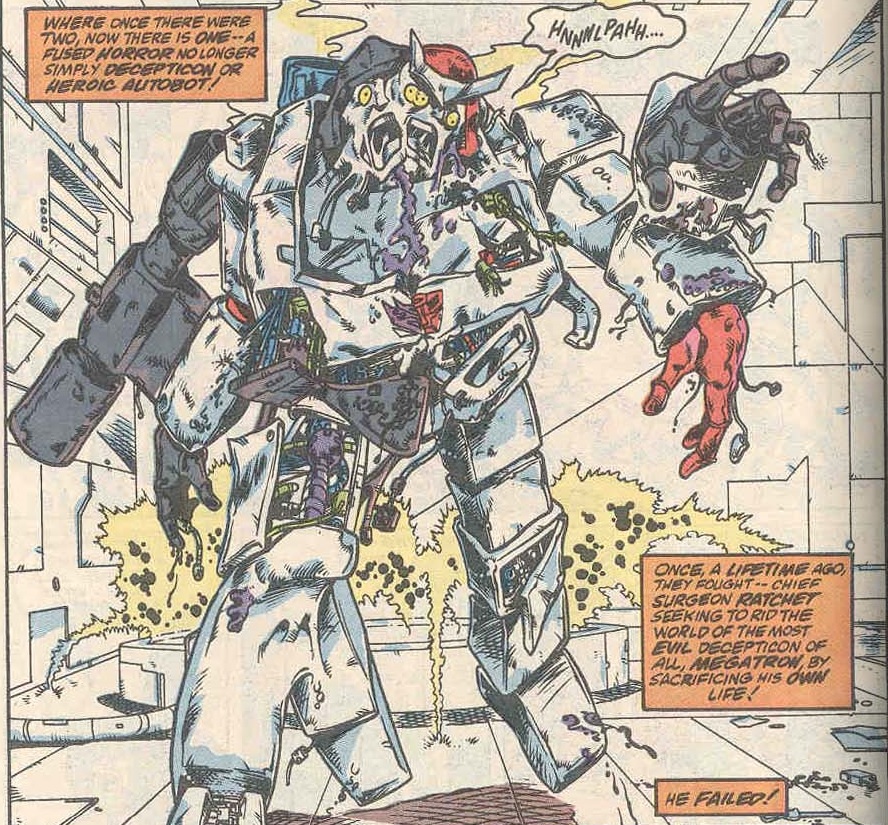 Kup enters and reacts to the sight of Megatron before him by blasting his laser first. Nightbeat steps in and gets Kup to release what he is seeing. But before anyone’s mind can be made up on the next actions that should be taken, The combined Megatron and Ratchet, force their way out of the room and start roaming the ship.

As the ship’s security officer, he insists that the creature must be destroyed because he is a threat to everyone on board. Optimus Prime can’t bring himself to agree because Ratchet is is friend.

The comic then cuts to Hydrus Four, where Grimlock is seeking for the well of Nucleon. This whole scene is laced with warnings that Grimlock should give up his fools mission. 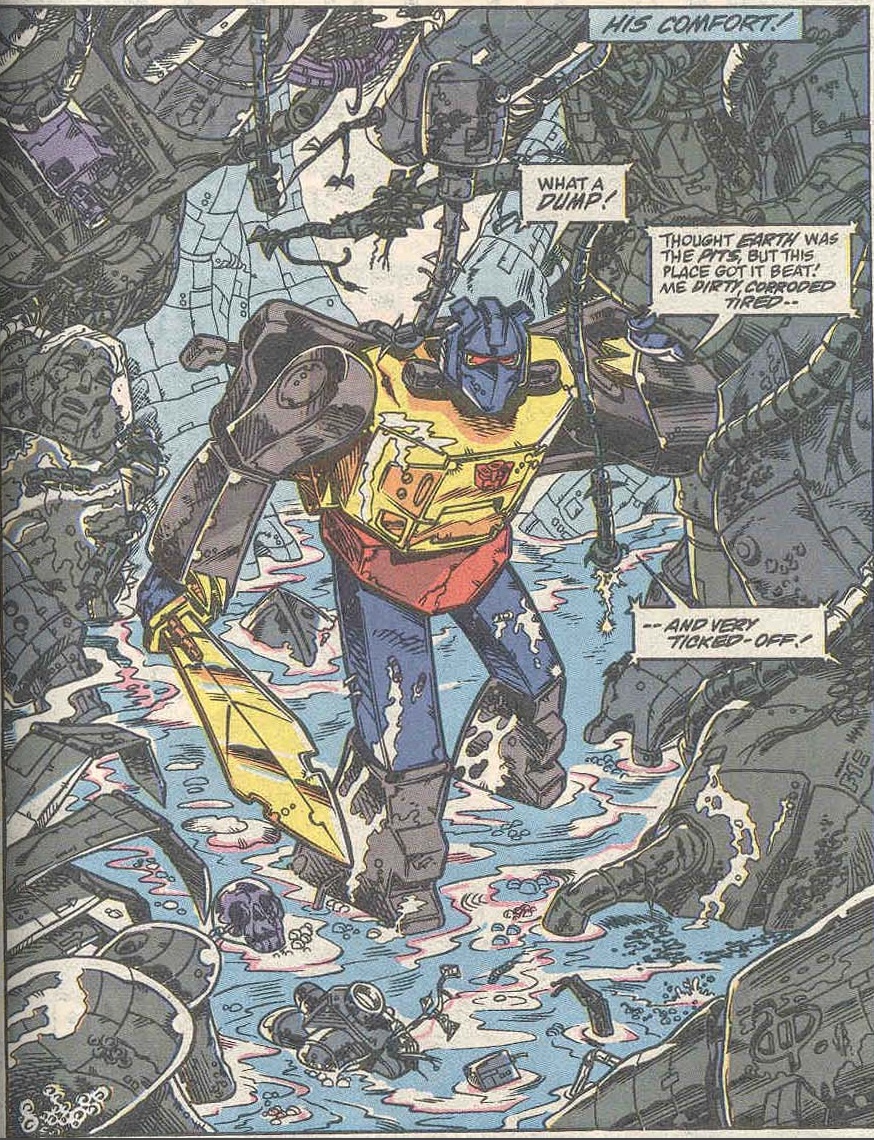 We return to the Ark to find that the Megatron, Ratchet hybrid has hurt Sureshot and now locked its self in the ship’s engine room where it is making a mess of things. Kup takes this opportunity to tell Optimus Prime how much of a screw up he is and then essentially threatens him with the Transformers equivalent of mutiny if he doesn’t grow a pair. 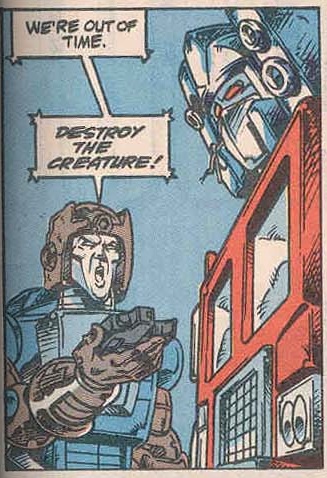 There is a very short fight between Optimus Prime and the combined monstrosity of Ratchet and Megatron. Though Prime ends up in a great position to vaporize the monster, he can’t bring himself to do it. Then, Optimus Prime is shocked when the beasts pulls prime’s gun at it’s self and in broken words begs to have his life ended. 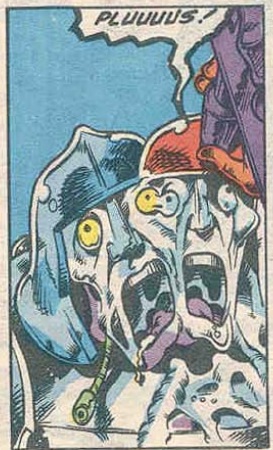 Returning to Grimlock on Hydrus Four, the Dinobot seems to now be getting and understanding the completely obvious warning messages that have been coming at him the whole issue. Just when you think he gets it, Grimlock decides to try the Nucleon himself before administering it to his comrades. The result? He feels amazing and all the warnings he got up to this point be believes where bull shit.

Returning to the Autobot Ark, Fixit thinks he can save Ratchet, But only if he also saves Megatron. 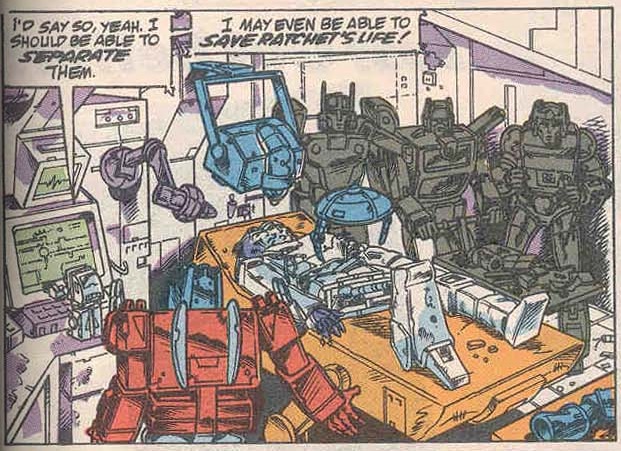 Well, I can say this issue was simply a fun ride for me. I enjoyed it. I’ve been pretty much enjoying most issues since Simon took over. Also, Some of Andrew’s art is breath taking. I’m finding myself pausing as I read these books just to take in the art work that’s gone onto these pages.

Kup is really a different character on these pages than he is in the 1986 animated movie. That’s really sticking out to me.

So for me, I’m on to reading the next issue. But while I’m doing that why do you guys tell me how you all felt about this issue. I would love to hear your thoughts and see if anyone looks at it differently than I do. 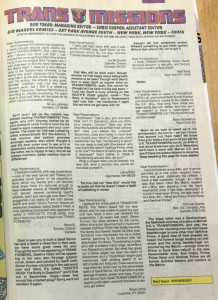 I don’t believe it! A miracle has happened. I never thought anyone could restore my faith in TRANSFORMERS. But-with issue #65-Simon has done just that! I had noticed the comic getting better bit by bit and hung in for the longest time. I’m glad I did. I was surprised to find the story narrated by the Matrix itself. It made for a very different view of the Transformers Universe. Is the Matrix truly good? Obviously not, if Thunderwing has it at the end of the chapter. Along with the writing, the artwork is very good. Michael Callahan may not like Geoff Senior’s work, but I find it a refreshing change. Thank you. I believe that this book is returning to, maybe surpassing, the greatness it once had. Who did the cover art for # 65? I found it incredibly striking.

Sir?! Don’t tell us the nobility has started reading TRANSFORMERS! Then again, why not? Anyway, thanks for all your praise (it never hurts to have the old creative egos massaged) and your comments. The cover for #65 was crafted by artist extraordinaire Bill Sienkiewicz. It was another real opinion provoker amongst readers, who either thought it was the best cover ever to see print or absolutely awful (more of the former than the latter, we’re happy to say), But as we always maintain, better reaction than in difference!

TRANSFORMERS #65 was stupendous-one of the best issues yet! Please congratulate Geoff Senior on his stupendous work, which my friends and I (all devoted fans) enjoy most. I’m fortunate enough to have collected dozens of TRANSFORMERS U.K. issues several continuing Geoff’s artwork, and I just can’t get over them! One suggestion-in many of the U.K. issues, Geoff and writer Simon Furman feature an awesome character called Death’s Head, a time-traveling mechanoid who appeared recently in Fantastic Four #338. How about featuring Death’s Head in our TRANSFORMERS?

Glad to see you’re both a Geoff Senior fan and a Death’s Head fan! In that case, we have some great news for you. Though he won’t be appearing in Transformers, Death’s Head will be appearing in his very own 64-page graphic novel, drawn and painted by Geoff (with Simon Furman chucking in the odd word now and then). It’s called “DEATH’s HEAD: The Body in Question!” and it’ll be out in September. Oops-does that sound like a blatant plug? Sorry, we’ll not mention it again.

I have just read issue #66 and it was terrific! PLEASE keep Geoff Senior as the permanent artist! By the way, where’s Fortress Maximus these days?

Fort Max will be back soon, though whether he’ll be happy about being back remains to be seen! Though we’d dearly love to keep Geoff as regular artist on TRANSFORMERS, sadly that cannot be (thought he’ll be back in a big way soon-trust us). Geoff is busy working on the DEATH’s HEAD graphic novel – “The Body in Question” (out in September!) right now. Aah- we mentioned it again (but we think we got away with it)!

Shockwave? That is you, you one-eyed freak, isn’t it? Galvatron, dare you defy your master, Unicron? Dare you strike when the Autobots are at their most vulnerable? Dare you disturb the universe? Starscream, does your traitor’s heart lead you toward your destiny? Dare you claim leadership now that Thunderwing is gone? Are you ready to deal with Shockwave, who may desire the same? Optimus Prime, what to do now? The Matraix is lost to you, but was it destroyed? Didn’t bother to check if Thunderwing actually died, did you?

What a tangled skein you’ve weaved, my dear Brit, what a glorious mire you’ve entrenched yourself in.

Too true, but our “dear Brit” would like to point out that he doesn’t make a habit of wallowing in mires!

I applaud the entire staff of TRANSFORMERS. The ‘Matrix Quest’ left me awestruck, and I’m now unable to stand the wait until next issue (I have just renewed the subscription I let expire last year). Simon Furman has done wonders for the comic. What character development I have witnessed! Optimus Prime has finally become the sturdy (but flawed) leader he once was; Grimlock now impresses me as a noble warrior, yearning to be reunited with his deactivated Dinobots; Thunderwing is powerful with a suitably manic edge, as befits a true Decepticon leader. But what has glued me to these pages has been the return of Starscream and a ‘mysterious’ single-optic mechanoid, both plotting deeds of unfathomable evil. Naturally, these aspects are magnified ten times over by the remarkable talent of Geoff Senior. His illustrations evoke feelings of motion, power and mass. Furman and Senior have made TRANSFORMERS a superb publication, and with this team it can only get better!

Aaargh! All this unfettered praise! where’s something to put these upstart Brits in their place? Ah, we’ve got it…

Much as we hate to admit we’re not omnipresent, the fact is=we don’t know. Can anyone out there help? We know from your letters that some of you get the U.K. TRANSFORMERS comic, so write in and let us know how you do it. Meantime, we’ll have a word with Marvel U.K. and see if thee are subscriptions to America. Keep watching this page for more details!

I’ve just finished issue #65, and it can be summed up in one word-superb! Everything was great, especially the artwork. I have a few questions, though. #1-Who was that black robot the Matrix healed? #2-Who was standing over the black mechanoid once it had been destroyed? It couldn’t have been, Prime, he was dead at this time. #3-What are Prima, Prime Nova and Sentinel Prime?

The black robot was a Deathbringer, the flashback courtesy of a story in Marvel U.K.’s TRANSFORMERS. And yes, the Transformer standing over the destroyed Deathbringer is none other than Optimus Prime. A good deal of time elapsed between the funeral barge landing on that moon and the dying Deathbringer encountering the Matrix-enough time for Prime to have been rebuilt in his new Powermaster form. And finally, Prima, Prime nova and Sentinel Prime are all former Autobot leaders and holders of the Matrix.