Welcome to Transformers issue 69. Sporting a cover that promises to bring in all these different story ideas Furman has been writing about. The ending is very *cough* Sixty Nine inspired *cough*. Before we dive into the story though, whats going on with this cover? 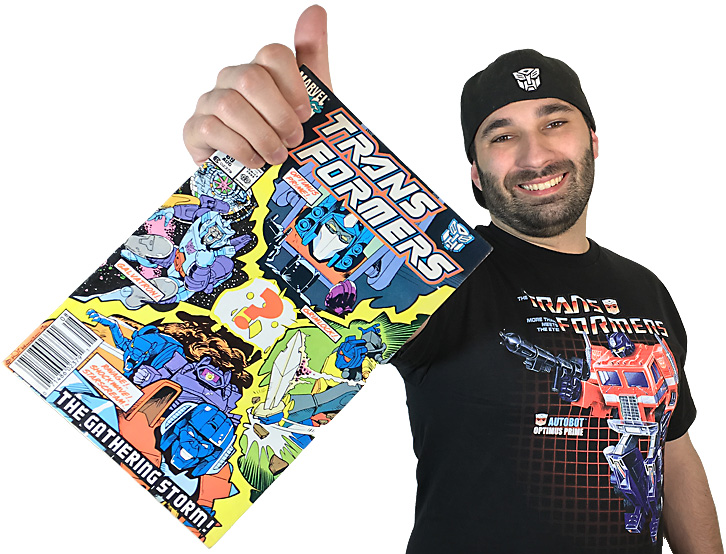 We got our seleves a collage of beautifully drawn images on this cover. From prime and company on the top, Grimlock on the right. Starscream, Ravage, and Shockwave on the bottome, and finally Galvatron and Unicron on the left. Dead center we have a giant question mark. Far down on the bottom, “The Gathering Storm!” is written. The cover implies that all these different story lines that Furman has been working on will be handled in this issue. It’s pretty exciting. The cover all together is not amazing but the individual elements are beautiful eye candy for me.  Okay, lets flip this sucker open and see what we got! 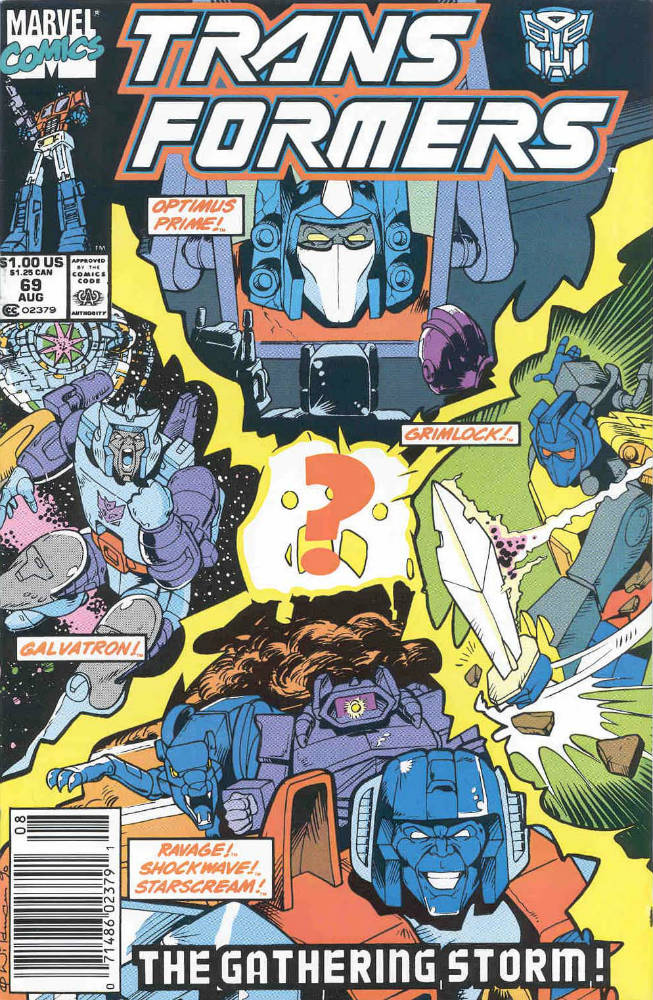 The issue starts off by putting us with the Dinobot leader, Grimlock. He’s mad because he wants his fellow Dinobots brought back to life. In explaining this he damn near kills Waverider.

At the same time elsewhere on the ship, Optimus Prime is concerned about the mood of his troops. They are becoming to complacent with the recent loss of the Matrix. He fears that if the Decepticons and the Autobots don’t unite to battle the threat of Unicron that all will be lost. 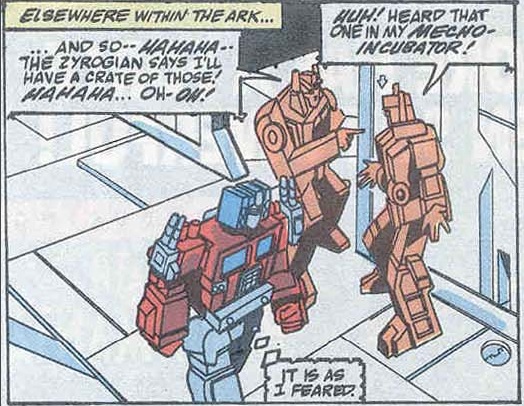 In the mean time, Optimus Prime wonders over to Nightbeat who’s been working on a project for prime. Did Megatron and Ratchet really die a few months back? Nightbeat has a theory that they may not have, but it’s a long shot. Nightbeat believes it is possible that ratchet might be stuck in between universes when the Trans-time Dimensional Portal closed.

Out in deep space, Galvatron is brought before Unicron and is not happy about it. In fact he demands to know why. Unicron explains that there are many different timelines and that his arrangement was made with an alternate Unicron. This Unicron orders Galvatron to go ahead of him to Cybertron and let them know he is coming. In doing a good job, Unicron will send Galvatron back from where he came. 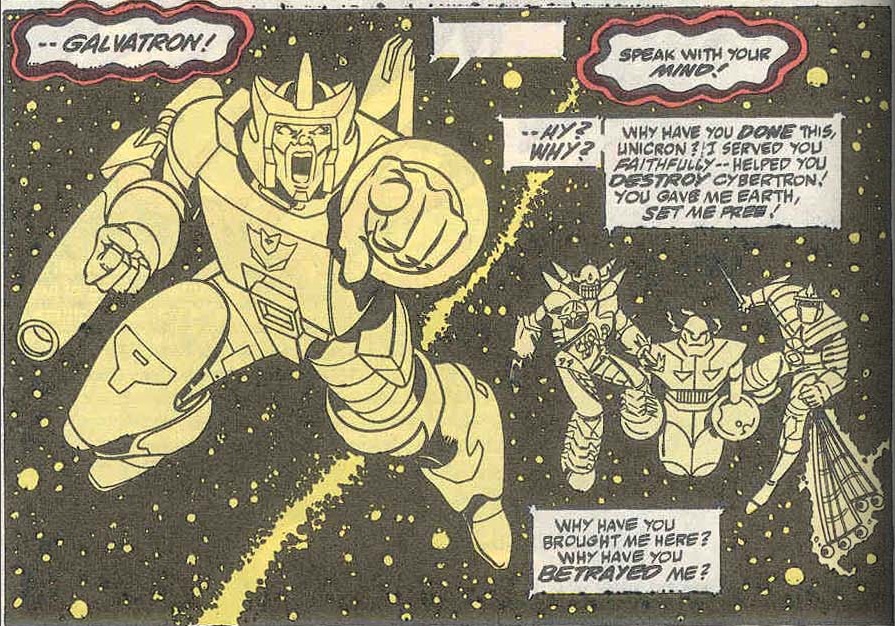 Grimlock, still feeling upset that Optimus Prime isn’t making the reviel of the Dinobots a higher priority, knocks out Kup in order to retreave his comrads from stasis pods. He is going to revive these Dinobots by taking matters in his own hands. They would do the same for him anyway.

On Earth, Scorponok is losing troops left and right because of the return of Starscream. These runaways are being recruited by Starscream, Ravage, and Shockwave,  They want to be the new leaders of the Decepticons.

Grimlock leaves the ship which forces Optimus Prime to explain to the others where Grimlock is headed and why he didn’t spend more time helping Grimlock revive the Dinobots to begin with.

While Prime is explaining all of this, Nightbeat’s little plan worked and returned a messhed together Megatron and Ratchet in a horrific sixty nine. 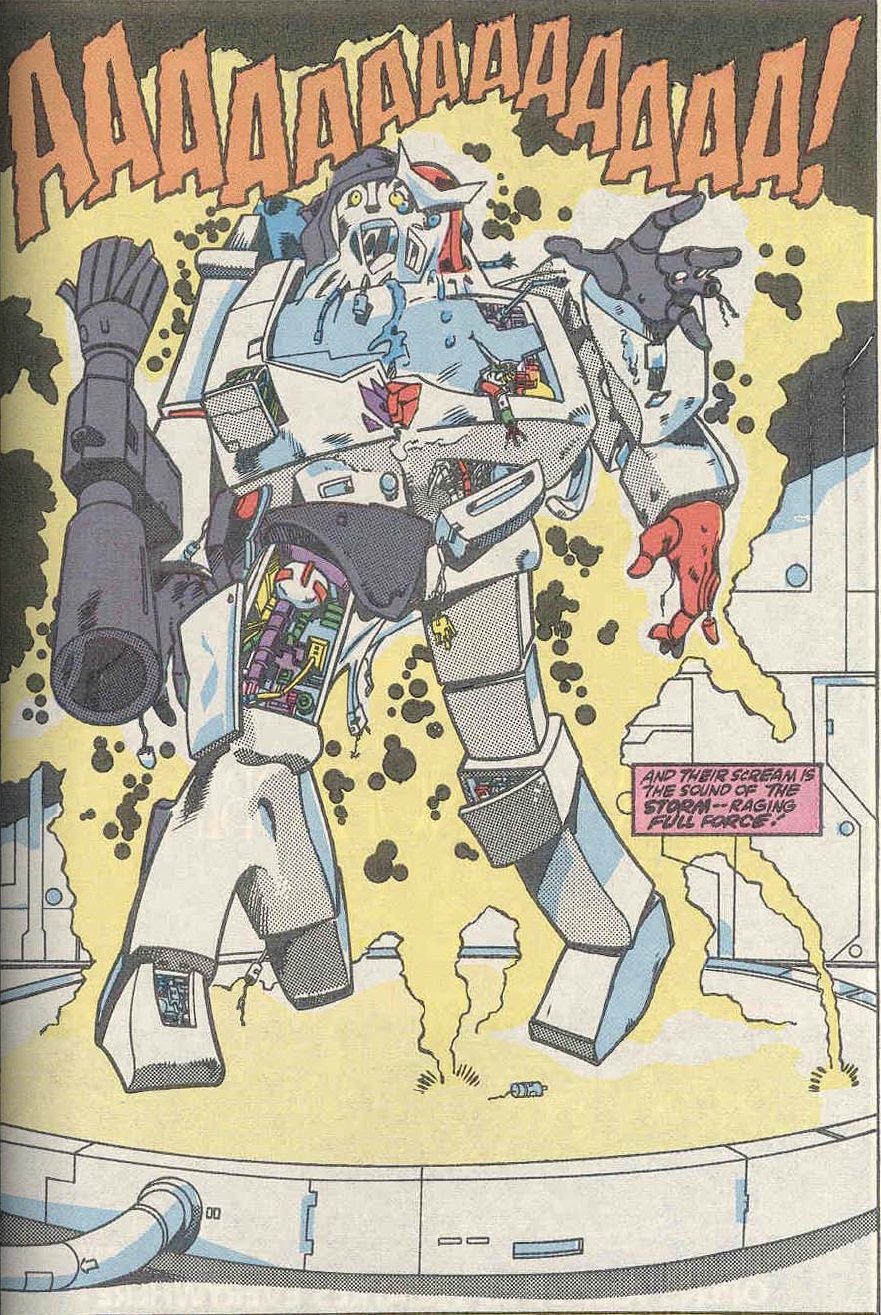 The issue was good. Solid. Interesting. Again, Furman has me wanting to start reading the next issue right away which is making it difficult for me to write the reviews. I guess that is a good problem to have.

Andrew Wildman is the artist on this issue. A fan favorite and it’s easy to see why. Guy is Amazing with his trade.

I didn’t care for Optimus Primes speech in the story where he wants to surrender to the Decepticons in order to fight off Unicron more effectively. That felt like a cheep trick done on the read. But that would be my only complaint on the writing really.

I really loved the space scene where Unicron has to tell Galvatron to speak with his mind. Makes sense and is really cool. Also the scene where Nightbeat is explain to Optimus Prime, using analogies, how they might find Ratchet.

And the end… The ending with the combined Megatron and Ratchet. To me, that is a play on the issue number being 69. Well done Simon. Well done.

What do you all think? Do you agree with me or not? I would love to hear why. It’s how we all learn. 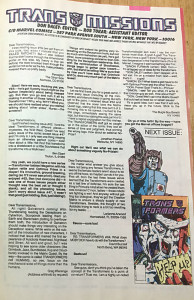 I was reading issue #59 (we get them on this side, too) when I noticed that you KILLED RATCHET!! But-I also noticed that he didn’t come through the dimensional portal on this side. My theory is that (as before) the blast knocked them through the portal but not as far as the Ark. It also probably messed them up pretty badly

Perceptor
The Other Side
Alamosa, Co

Blast! Here we were. thinking yes; yes, YES-he’s got it pretty much right on the button (especially about being messed up). But then you go and ruin it all by making it another of those ‘letters from a Transformers’! Why, why, WHY? Mind you, we should have realized when you started talking about ‘other sides’. Nurse-the screens!!

I just finished reading issue #62. I love the idea! Transformers. In different places-mysteries, the Wild West. Great! I’ve read every issue of the comic except issue #47 and I’m only 9, I only see one thing missing from an otherwise perfect comic-kids! How about a little Hot Rod that transforms into a skateboard or a little Soundwave that transformers into a Walkman!

Hey yeah, we could have a new series-Transformer babies! Meagon with his fusion rattle and Optimus Prime in a diaper! It’s innovative, ground-breaking, daring (so it’ll never see print!). Glad you enjoyed #62, Ben (not everyone did-it was one of those issues people either thought was the best yet or thought it stank), and all the preceding issues. Don’t worry about issue #47, it wasn’t that good (just kidding, Bod, just kidding!).

All right! Galvatron’s coming! With Thunderwing leading the Decepticons on Cybertron, Scorponok leading them on Earth and Starscream plotting to overthrow them both, the introduction of Galvatron should make things very interesting on the Decepticons scene. While we’re on the subject of the introduction of new characters, I noticed that issue #62 marked the first appearance of Autobots Hosehead, Nightbeat and Siren. All well and good, but I was hoping to see some older characters (like Grimlock, Jazz, Bumblebee, Kup and Cloudburst) involved in the Matrix Quest. By the way-the comic is called TRANSFORMERS not HUMANS, so yes, focus on the mechanoid side of things more than the humans.

Things will indeed be getting very interesting on the Decepticon front, but not so much with Galvatron (as yet). He’s got other, mre pressing concerns than bidding for the Decepticon leadership. But, with the reintroduction of Shockwave, things begin to gather pace toward-ahh, but that’d be telling! We’re sure that by now you’ll have seen that Grimlock and Co. were very much part of the Matrix Quest!

Let me first  thank you for a great comic. I have every issue (including all the miniseries), and intend to keep on going. But let’s get to the point. I received issue #64 and observed that the cover bore the Matrix Quest logo, stating that this was part 3 of 5. Knowing this to be correct, I turned to the title page, immediately seeing the same logo, but this time stating this was part 4 or 5! I have a logical explanation for this mishap. the TRANSFORMERS staff got so caught up in the action of the comic they lost all sense of time and judgment, thus printing the wrong logo. How about an editoral No-Prize?

Right on! We’ll see what we can do about something vaguely No-Prizish!

No matter what answer you give about there not being any female Transformers, it seems the female readers aren’t about to let you off the hook, so maybe i can do it for you. First off, from the last three issues we’ve learned that the Transformers were created as a last line of defense. I’m sure that last thing in Primus’s mind when he created them was romance! C’mon, ladies-these robots are fighting a war! And anyway, without getting too biological, they’ve got the Creation Matrix to ensure a steady supply of new Transformers. Besides, the thought of two Autobots trying to neck is a bit too revolting for my tastes…

RE: TRANSFORMERS #64. What does MOBY DICK have to do with the Transformers?

Gee guys, don’t you think you’ve taken the concept of the Transformers to a point of no-return? Trust me, I am a highly un-noted Transformologist and even I say the nonsense must stop. A god! A god! The Transformers have a god? I think i’m beginning to see desperation in the Transformers office at Marvel. I imagine it went something like this:

* SIMON FURMAN (writer): Well, Don-I’m all tapped out of ideas for the Transformers.

*DON DALEY (editor): Don’t despair, all is not lost. I’m on a mission from God-wait that’s it… a god!

*SIMON: Eh? what does a god have to do with Optimus Prime and the other Trans-

*SIMON: I see! Tell you what, I’ll write in that Unicron guy as well. How about that?

*DON: Great! We’ll call it the Matrix Quest! it should sell at least six or seven issues!

It’s a good idea, but I see that it will only mess you up in the future. Stick to the basics!

Oh ye of little faith! By the way-have you got the Marvel offices bugged?