With issue 65 we begin part four of the five-part Matrix Quest. If the cover for issue 65 is to be believe the quest series will continue its track of getting darker and darker with each issue. I really enjoyed this issue and I can’t wait to share my thoughts about it below. But first, lets check out this cover! 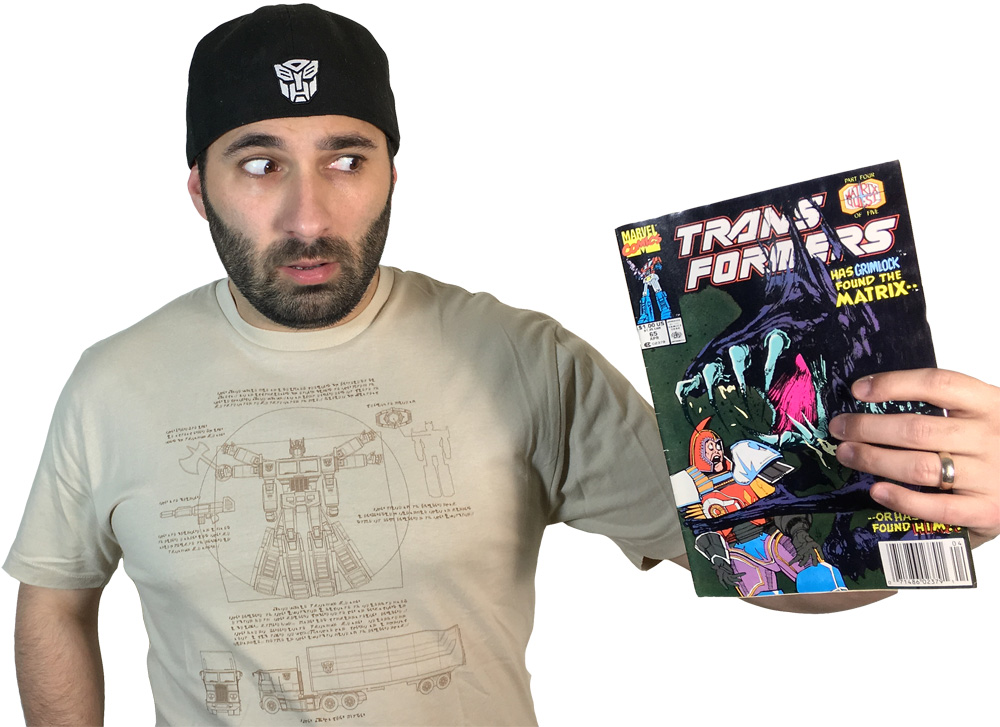 This is a dark cover. It’s out-of-place. It’s not what I would ever think of when thinking of Transformers covers. Not until I read the book did the cover (and story) remind me of the movie Alien and it’s sequel, Aliens. The large, drooling, long toothed, alien creature dominates this dark cover. Grimlock look helpless in his pretender shell, caught in the Alien’s hands.  Written on the cover is, “Has Grimlock found the matrix — or has IT found HIM?” 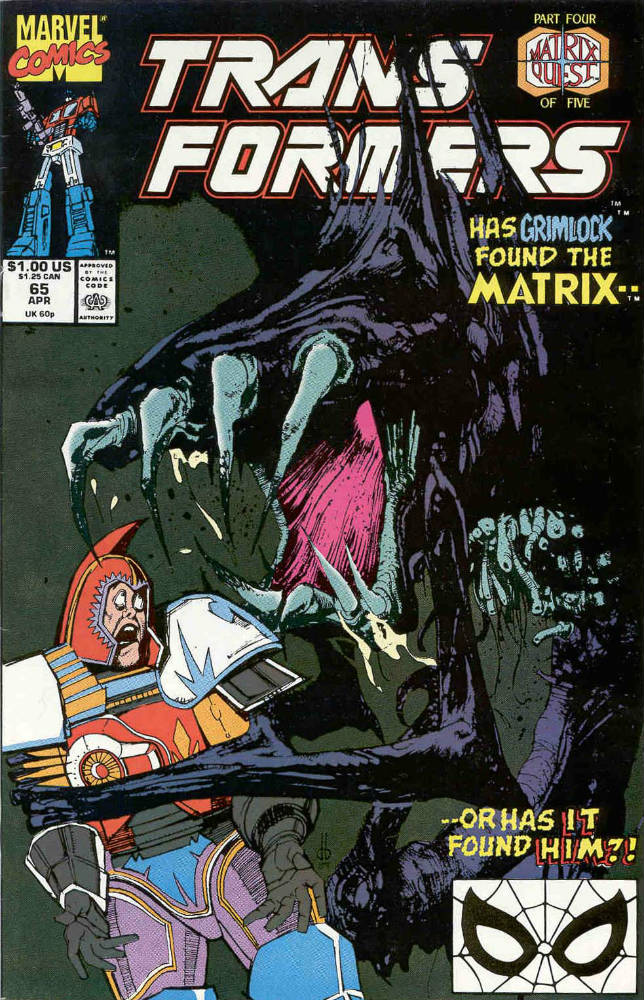 Along with Optimus Prime’s original body, the Matrix ended up on the moon, VsQs where it remained undisturbed until a droid crashes near by. Rebuilt by the matrix, the droid because a destroyer of all life. The Matrix because curious as to the evil it created. 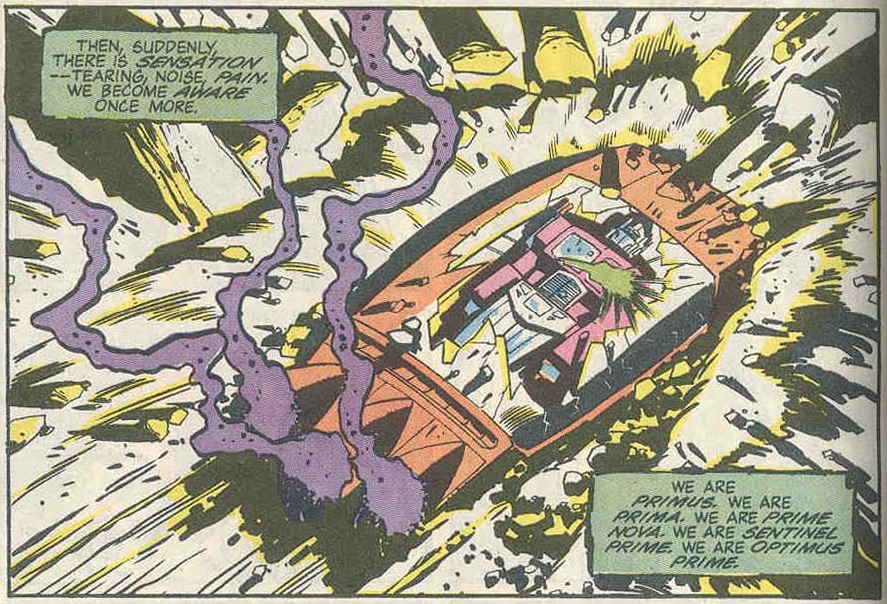 Another creature comes in contact with the matrix and enhances it to be a better predator than it was previously. This only increases the Matrix’s own curiosity about evil. The enhanced creature ends up killing scientists from Cameron Space Control. 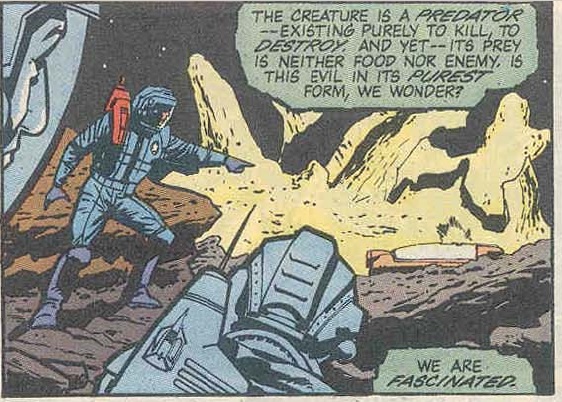 Now, Autobot Pretenders are at the VsQs exploration habitat setup by the Cameron Space Control team. Bumblebee finds survey log files which give a few clues about the control teams first encounter with Prime’s funereal barge and the evil spawned by the Matrix. In a very dark scene, Grimlock returns from exploring the habitat after discovering the dead research team. Before they know what to do next, Thunderwing enters with demands of having the Matrix turned over to him.

Jazz does try to reason with Thunderwing before Grimlock punches him. Other Decepticons join in the fight, but Windsweeper stands back which allows for the evil creature the Matrix has created to grab him from behind and pulls him up into a ceiling of the habitat.

Around this point in the comic we cut to England for an interlude and are shown a purple bot rise from the waters and who speaks analytically. It’s not said, but I assume this is Shockwave. 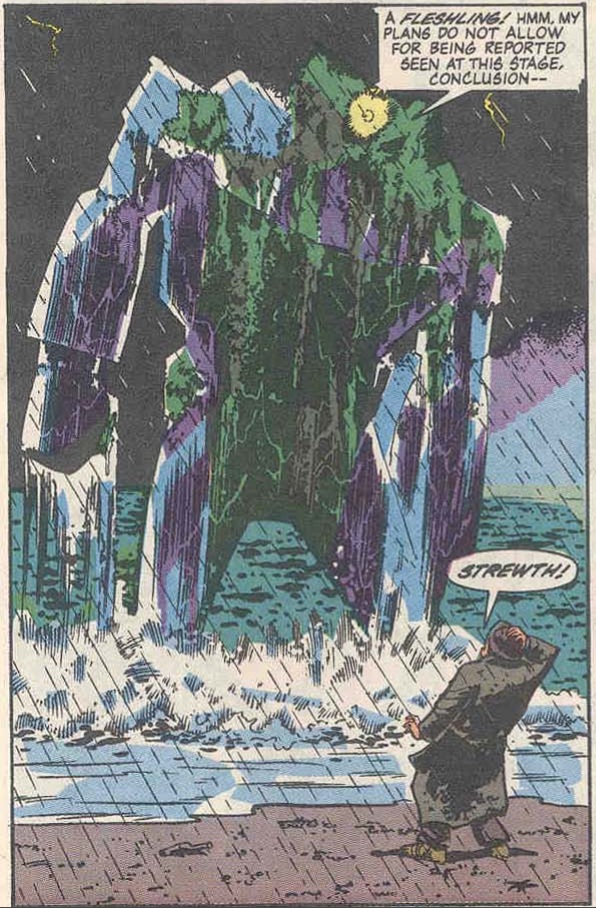 Back on VsQs, the evil creature is found about to eat Windsweeper. Thunderwing Cases after the monster sensing the energy of the Matrix from it. The other Decepticons wonder how gone their leader is. 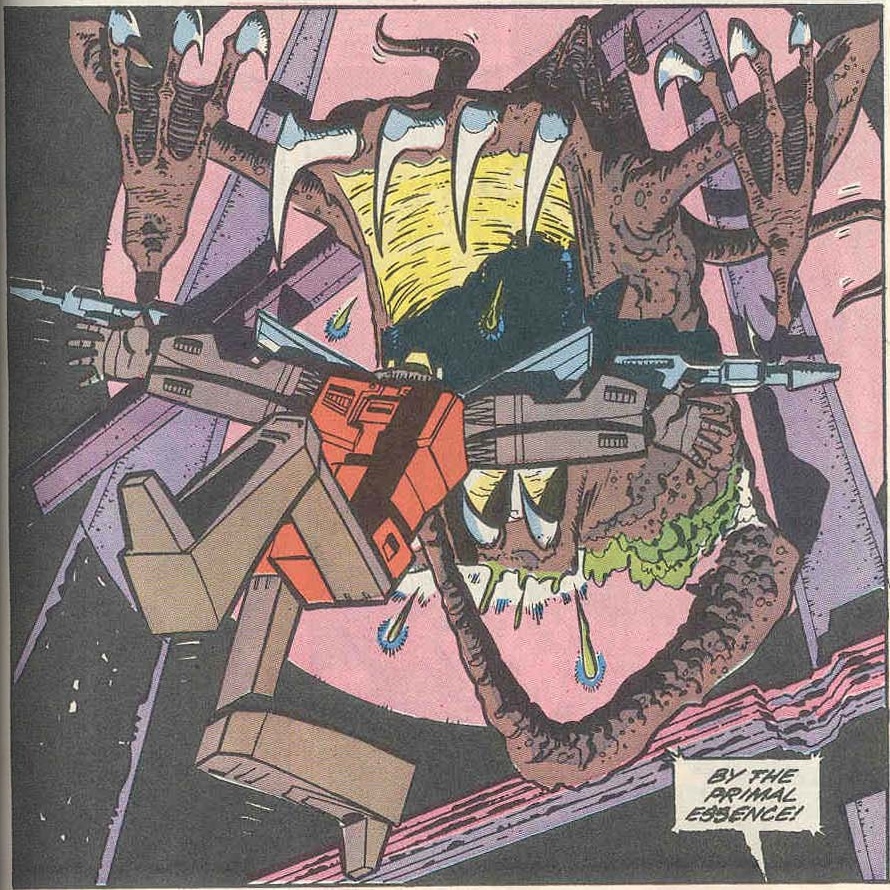 Eventually the Autobots find themselves between Thunderwing and the creature and they fight to try and reach the Matrix. Bumbebee reaches for it and then the scene cuts. 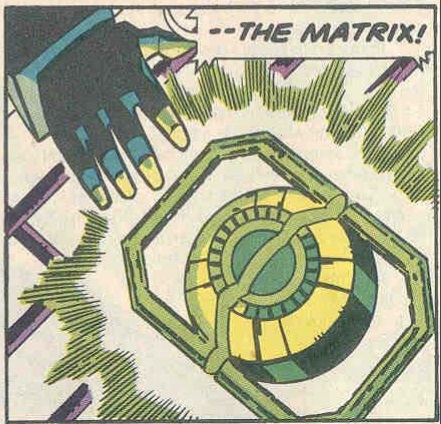 On the ark the Autobot Pretenders’ shuttle returns and lands on board. Optimus Prime meets the ship sensing the Matrix on board. As the shuttle door’s open, Thunderwing emerges wielding the Matrix. 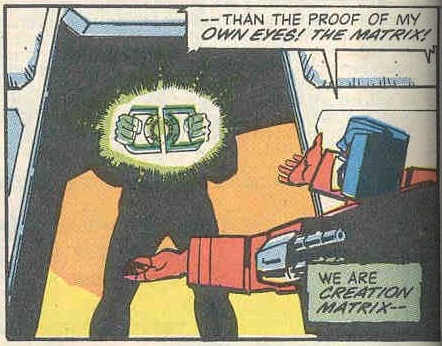 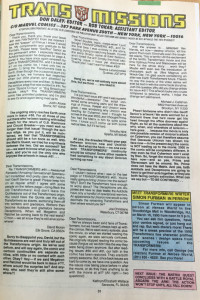 Thank you, thank you, thank you! Issue #61 was FANTASTIC! From the moment I saw the “Keeper” of Primus I knew it would be. My compliments and gratitude to Mr. Furman. Please keep “Geoffire” Senior as the permanent artist. I especially liked the Autobot technician he designed on page 4, panel 4. You have once again renewed my faith in TRANSFORMERS, and it is back at #1 on my comic list. I have only two requests: 1.) bring the Transformers back to Earth. Even though the occasional jaunt into space is fun, we humans feel neglected when our little planet isn’t attacked by Decepticons every now and then. 2.) Maintain the serious edge that was evident in #61. No more “Space Circus”or “Big Broadcast” issues, okay? The TRANSFORMERS comic has unlimited potential, and I’m glad to see it’s once again being lived up to.

The ongoing story reaches Earth once more in issue #68. For all those of you out there who’ve been waiting with bated breath for the return of G.B. Blackrock and Circuit Breaker-you need wait no longer than that issue! Though the serious edge, as you put it, will be maintained, we feel that TRANSFORMERS should still be fun book as well. With the Matrix Quest, we tried for a synthesis between the two. Did we succeed? Tell us-we want to know what you think. Oh yeah, and you’re not the only one who enjoyed the artwork in issue #61…

Re: TRANSFORMERS #61-Awesome! Fantastic! Amazing! Sensational! Spectacular! Incredible! And pretty darn nifty neat-o, too! Geoff Senior is great! Please keep him on as regular artist! I agree with some people on the letters page-bring back the old Transformers! And don’t leave the Quintessons out of the Transformers origin. You could have the Quints use the early Transformers as slaves, sectioning them off into workers and gladiators. Workers then become Autobots and gladiators become Decepticons. When will Megaton and Ratchet be coming back to the real world? C’mon-we all know they’re still alive somewhere!

Sorry to disappoint you, David, but the Quintessons are well and truly left out of the Transformers origin. As we’ve said before, and will say again, the comic and cartoon continuities are separate entitles, with little or no contact with each other. Okay? Hey-if we said Megatron and Ratchet would be back in issue #??, where would the surprise be? And anyway, who said they’re still alive somewhere?!

Wow! Double, Triple, Mega-wow! I just bought TRANSFORMERS #61, and for the first time I was entirely in the story, reading, trying to catch my breath. I loved the story (finally, some of their history), and I loved the art! simply the most captivating issue I have yet discovered. Thank you! I can’t wait for issue #62!

Hang on, we’re not entirely sure about this, but we think…you liked it!

I’ve just read issue #61 and it was superb! Wonderful-awesome! The script contained some amusing parts and the drawings of Primus, Keeper and Unicron were great. I was wondering why Univron was heading for Cybertron now! I thought he comes in the year 2005, and I thought Prime has had the Matrix in him for quite some time. I know you’ll come up with some radical idea, but it’ll be hard.

Ah yes, the dreaded fifteen year gap between Unicron now and Unicron then. But what the heck-no one ever said TRANSFORMERS’ continuity would be simple! some other readers had something to say about Unicron turning up now…

I couldn’t believe what I saw on the last page of TRANSFORMERS #61. You’re really going to bring Unicron into the series? Why? Don’t the Transformers have enough to worry about? The Decepticons are disjointed and have no clear leader, the Autobots have only a handful of operation warriors. An appearance by Unicron now would surely decimate the remaining Transformers and then where would you be?

We’ve always been avid fans of Transformers, but we haven’t always kept up with the comics. We’ve seen every episode, plus the movie, so when we started reading the comic again, we were seriously confused. We originally stopped reading the comic because (forgive us) we didn’t like the way they were being drawn anymore. But after reading issues #60 and #61, our faith in the comic has been restored. They are both simply awesome. But, since back issues are hard to come by, we have one question: Are the issues now taking place before or after the movie, or do they have anything to do with the movie at all? (all right-two question!)

And the answer is…Unicron! Yes friends, act now-destroy Unicron, kill the grand Pooh-bah! Eliminate even the toughest stains. This is terrific! All the excitement of the terrific Transformers movie and this time Optimus Prime and Starscream will be here for the whole story…won’t they? Maybe we’ll even see the introduction of characters such as Ultra Magnus and Wreck-Gar. I’m glad you’re considering an alternate Earth transformers future. There’s no way the events of the video series will ever be tied in with the comic book storyline. Just one question. Why did you change artists for issue #61? The artwork looks very crude compared to previous works. I hope the change isn’t permanent.

Phew! Someone who didn’t like Geoff Senior’s artwork! We were worried for a moment there that he’d never get his head through the office doorway again! Right, as for the question about the why, when, and wherefore of Unicron-here goes…because the movie is only one possible version of Unicron’s attack on Cybertron, you can therefore assume that (because Unicron has shown his face now-in the present day) the comic is NOT leading up to the movie. 2005 in the comic will be completely different. It may even be that Cybertron won’t exist by then. So, forget the movie. Unicron is here now-and so yes, Prime and Starscream will be around. No, Prime does not have the Matrix. And yes, both Autobots and Decepticons are going to have to get their acts together, or they are both facing certain extinction. What can we say but-TO BE CONTINUED…

This was a good issue. Well written and enhanced with Geoff Senior’s art. Like I said up top, the issues are getting darker and I still hold that this issue had an Aliens vibe to it.

Through out the issue the Matrix itself narrates parts proclaiming in the end that it is Primus, Prima, Prime Nova, Sentinel Prime, Optimus Prime, and finally Thunderwing. I wonder if the Thunderwing will stick. I kind of thing it has to. Will find out for sure soon enough I suppose.

Those are my quick thoughts on this issue. I’m so excited to keep reading and do my next review to find out how the Matrix Quest ends. I really would love to know what you all thought of this issue. If you get a chance share your thoughts with me below.