Marvel’s Transformers, Issue 58 titled: All the Familiar Face! It’s a title that tells more about the story inside than the cover does. But we’ll get into this Simon Furman story soon enough. First, lets check out this Jose Delbo cover. 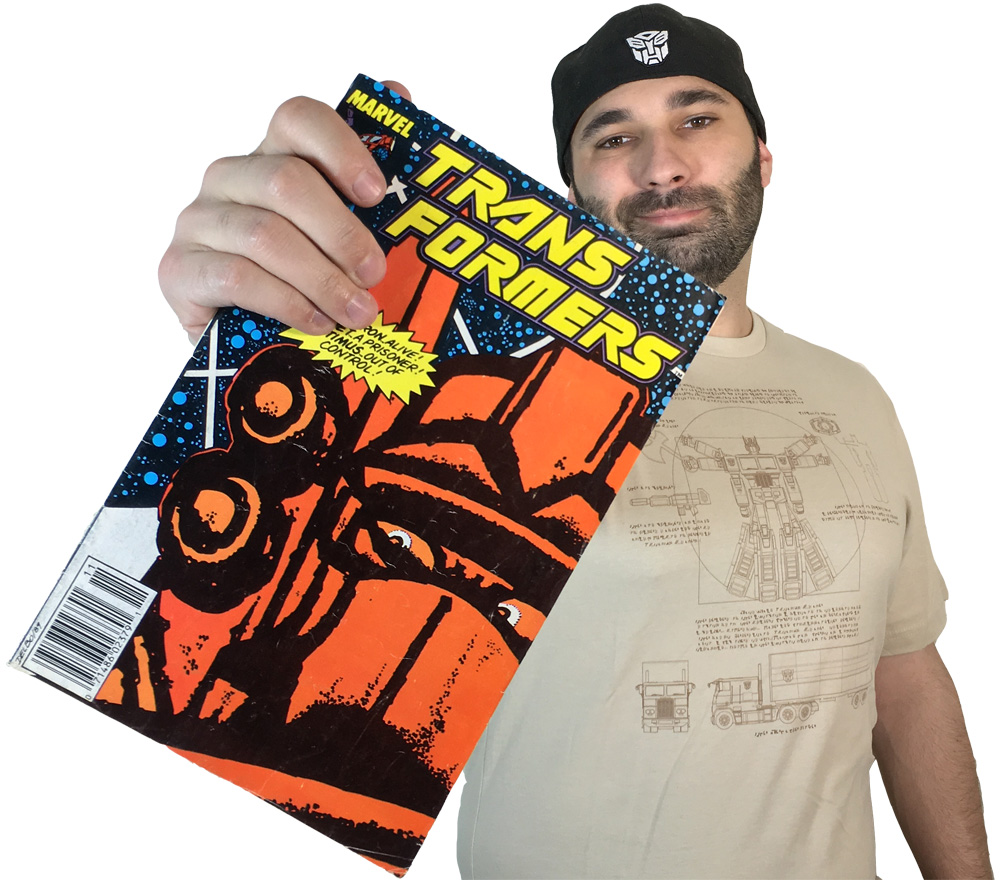 The cover for issue 58 feels very out of place. I remember thinking that when I first saw it as a kid. Looking at it now at the age of 35, I still feel like it’s out of place. It feels like Marvel got rushed on this cover and the result is something that could be mistake for… abstract art? Maybe? All I can say for sure about this cover is, I don’t like it. The cover consists of most of a red Powermaster Optimus Prime face. The background is open to interpretation. Might be a window looking out into space. What do you see? “Megatron(tm) alive! Ratchet(tm) a prisoner! Optimus(tm) out of control!” is written in black within a yellow spiked text bubble. (Gotta love all those Trademarks.)  The text bubble gives you pretty good clues about what is going to happen between these pages. But over all this cover just feels like a child’s third grade collage. 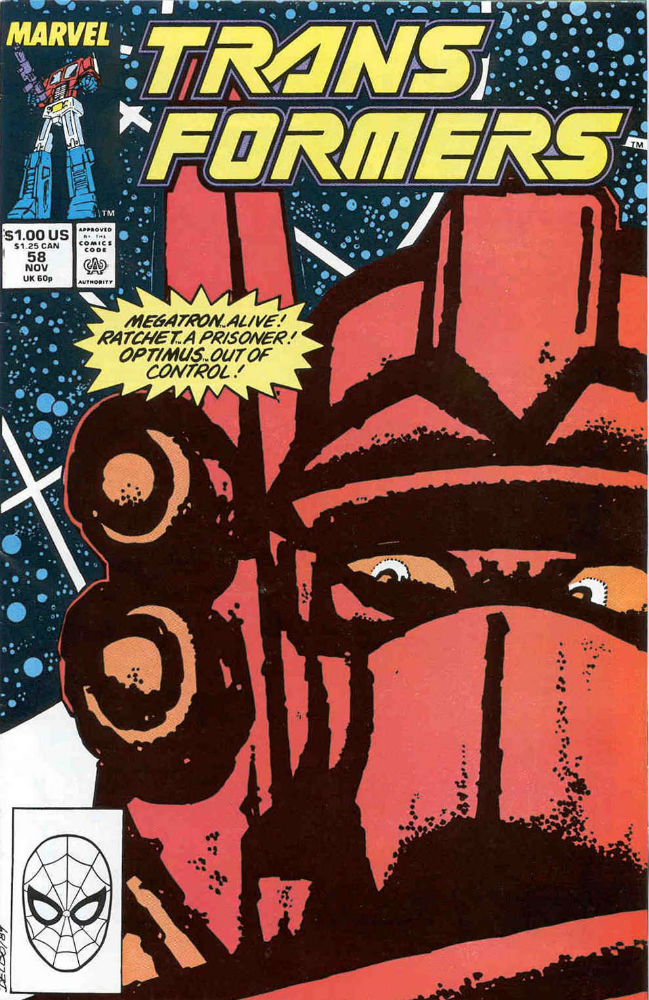 As we flip open this floppy, we see that Ratchet has been enjoying the challenge that Megatron presented him with in the last issue. Using the advanced Cybertronian technology, Ratchet has nearly completed his work on Starscream. Ratchet clearly got carried away with this task, but does remember that the work was actually forced onto him by Megatron. Ratchet is also thinking about the fact that he brought three deactivated Autobots with him to Cybertron and there are still three unused Pretender shells. Megatron leaves Ratchet to continue his work and offers Deadwind and Darkwing permanent jobs. The offer is accepted because it’s better that possibility facing the Mecannibals who where after them. 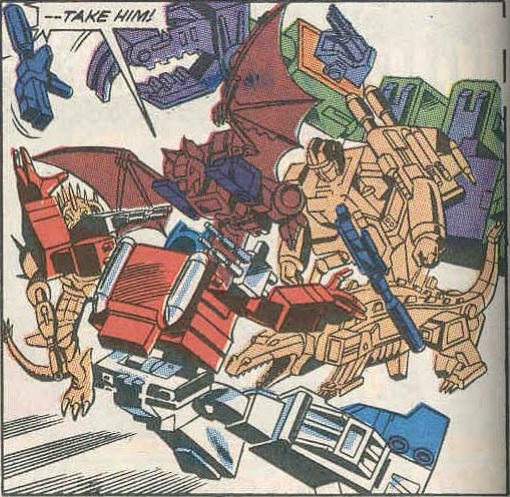 With raw strength, Optimus Prime sends his attackers through the air. He then comes up to Zarak and tries to explain what he thinks is going on, even after he gets blasted by Scorponok. 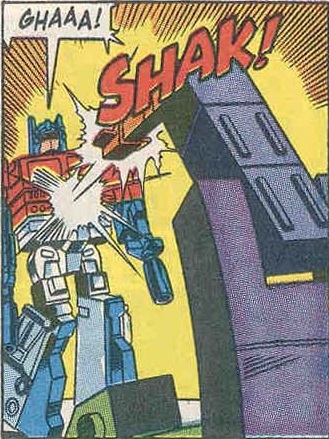 By now Starscream is completely repaired, though his mind is a blank slate. Megatron is pleased and Ratchet uses this time to remind him to uphold his end of the agreement and remove the explosives from the Ark. Megatron just laughs and prepares to blow the ship regardless. 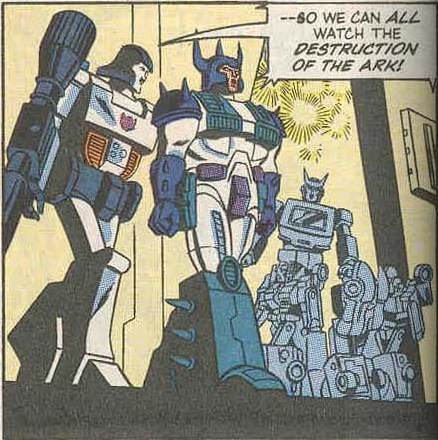 Ratchet new Megatron would try and double cross him, just not this soon. He needs more time to enact his own plan. Needing more time, Ratchet sets off an explosion in the lab allowing him to escape from his Micromaster guards. Making his way through the Decepticon base, he finds Megatron has already sent Starscream on his way to earth via a dimensional portal. He then meets Megatron. 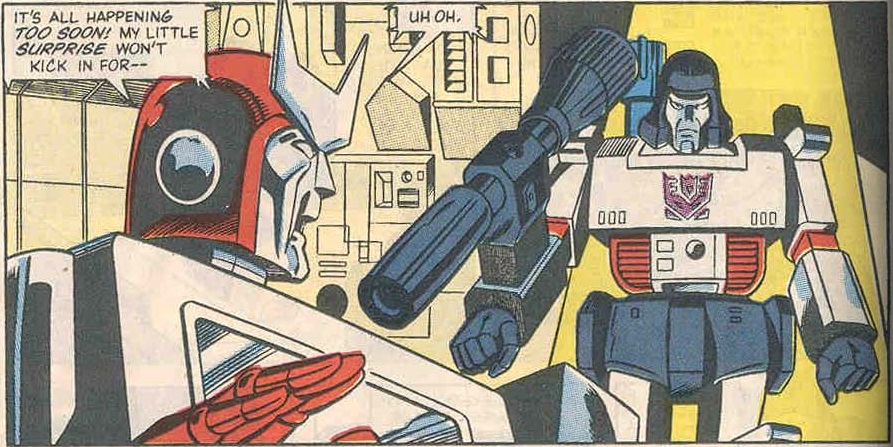 Blackjack nearly finishes planting all the bombs on the ark when he seems that the other Autobots are heading back. While searching for some way to blast them he runs into Kup who has come back to life enough to point a gun right at him. This scares Blackjack enough to drop the bomb trigger and the countdown to destruction begins. 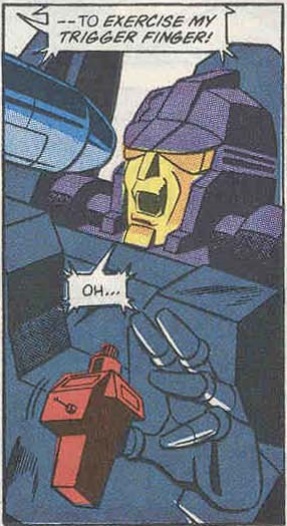 Starscream arrives on Earth via the dimensional Portal just as Zarak starts to believe what Optimus Prime is saying. Starscream is set to destroy.

On Cybertron, Megatron postpones the killing of Ratchet on the receipt of news that the Pretender Prototypes are glowing. After a beat, Megatron realises what Ratchet has done with the deactivated Autobots just as the come to life. 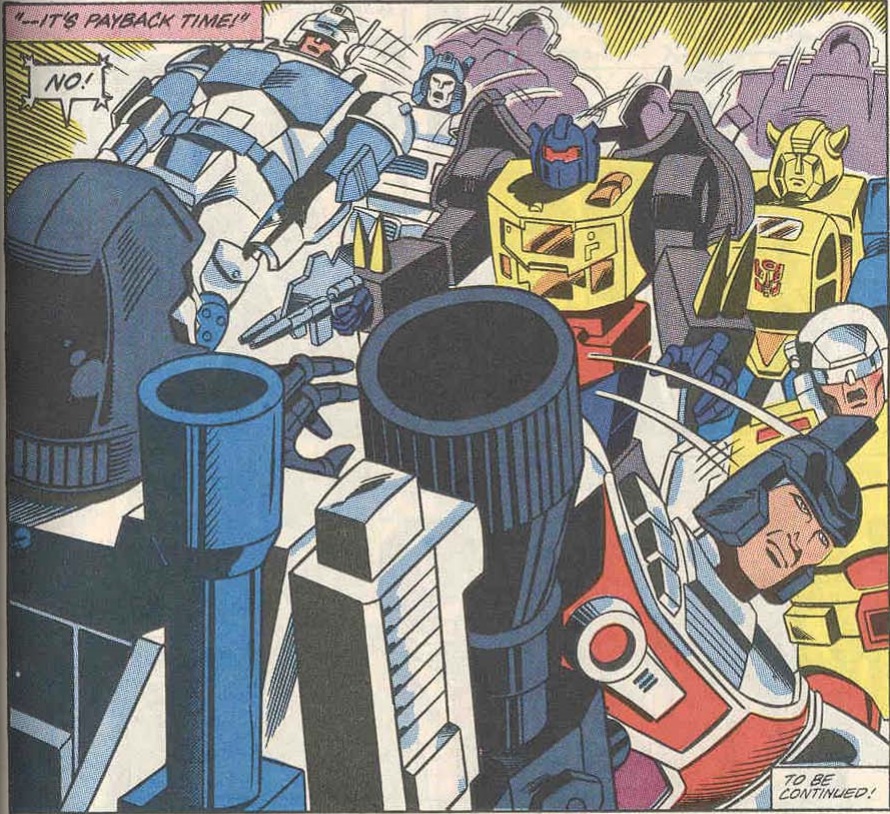 Let me point out the obvious one more time. The cover sucks. I would love to know the story as to how this cover came to be used. Something like that might be lost to time though.

Its a good story. I do find that the use of the pretenders is a bit week. They are just serving as a mechanism for bring back fallen characters. I can only speculate that Furman had to use the Pretenders because it was mandated by Hasbro.

Over all, its a good story. Of the three Furman stories so far this one is the second strongest. Everything is in place for the next issue and again I’m rather excited to get my eye balls on it.

How are you all enjoy the first few books of Simon Furman? How do you feel about the use of the Pretenders here? Shoot me an e-mail or leave a comment. I would love to know what others think.