The 56th issue of Marvel’s Transformers introduces Simon Furman as the writer. Simon has experience with Transformers having been writing for Marvel’s UK Transformers for some time. Having been a huge fan of Transformers UK ‘Man of Iron‘ I have high hopes for the new writer. But before we crack open this issue let us check out the cover art. 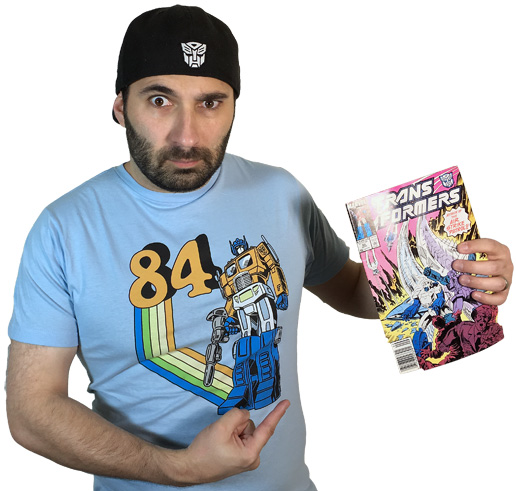 Represent Transformers On Your Chest With Great T-Shirts From 80sTees.com!

The cover depicts the Decepticon Air Strike Patrol attacking an earth airstrip as men in military dress fun for their lives. “Attack of the Air Strike Patrol!!” is rendered on the cover giving you a small idea of what the story might be about. (We do have a history of Transformers covers being miss leading.) The good about the cover is the line art. I mean it’s really good in my opinion. The bad is the colors. It’s just a wash of color that makes it hard for me to focus. It’s not really the colorist fault. That person had to work within constraints. Still, the line art is amazing. 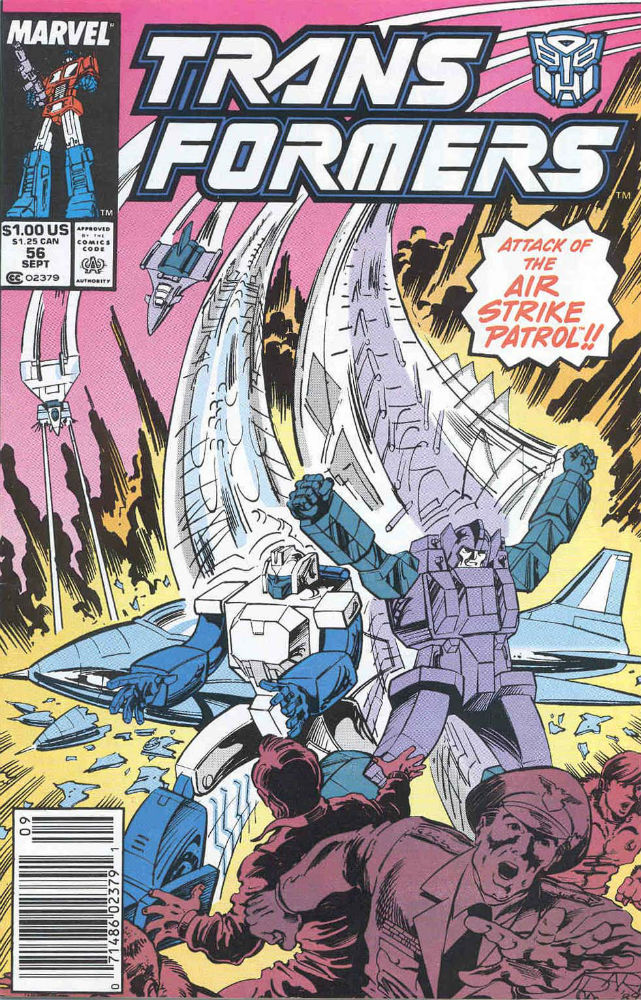 With issue 56 entitled, ‘Back from the Dead’ we get a much needed plasma transfusion in the form of  writing talent from one, Simon Furman. To put it simply, this issue reminded me why I love Transformers and their story so much. Not the best Transformers story I’ve ever read, Not as good as the ‘Man of Iron‘,  but so much better than it has been. I hope that Mr. Furman is setting the bar for himself in this issue, because if he is, we are in for some great stories.

Ratchet’s nightmares welcome us into the issue. Over worked and stressed out, Ratchet has been increasingly suffering from nightmares. Zombie filled dreams of his fellow fallen friends attacking him keep him from even enjoying a single moment of restbit. 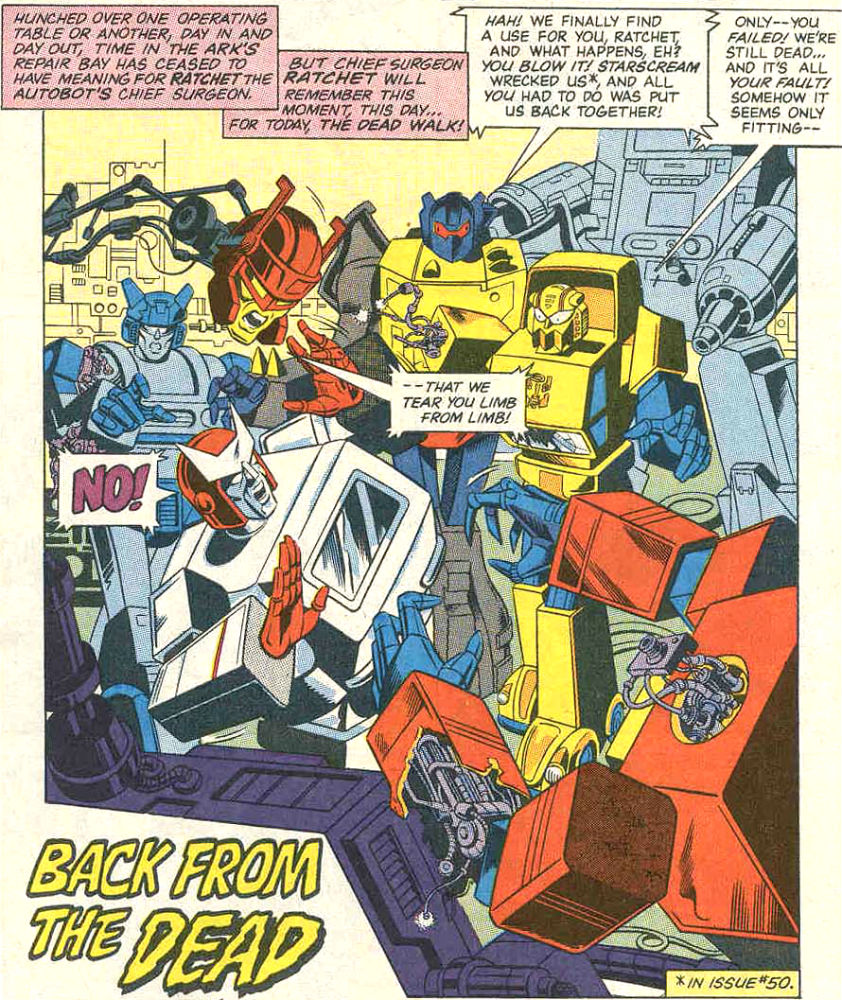 Optimus Prime saves Ratchet from his evil dreamscape that was the result of an involuntary system shut-down. Optimus Prime is desperate to have his crew restored to health and now realizes that this has caused a mountain’s worth of stress on Ratchet. Clearly conflicted and concerned from all angles, Optimus Prime orders Ratchet to take some downtime. Ratchet has a hard time following this order knowing full well how much Prime needs his forces restored to operating order.  Ratchet is also frustrated in the lack of any real advanced medical tech he could use. If only he where back on Cybertron… 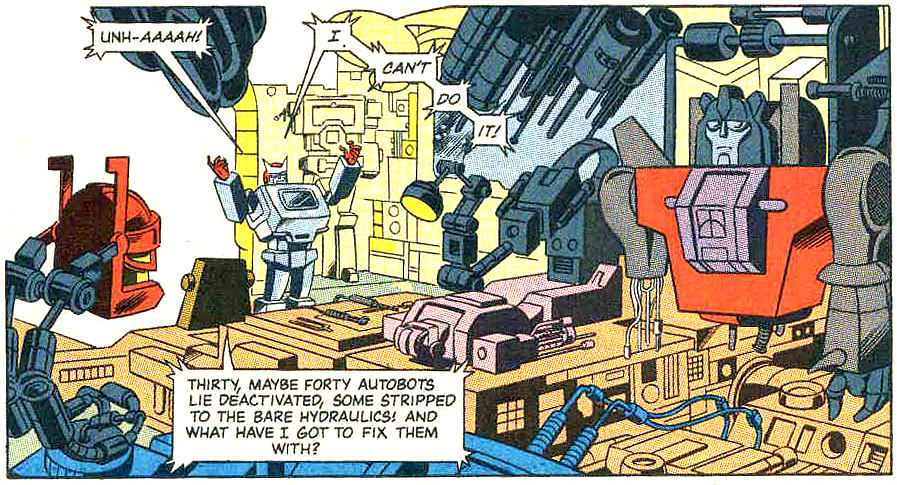 On Cybertron, we see a mystery character speaking with the Micromaster Sports Car Patrol. This group of small Decepticons show off that they are ready for their mission by switching their faction symbols in front of our mysterious villain who then contacts more agents on Earth known as the Air Strike Patrol and orders them to begin their part of this new mission.

MacDill Air Force Base is the location of the unveiling of a new state of the art Mid-Air refueling jet. The Decepticon Air Strike Patrol soon attack the Air Force Base after the jet’s announcement. This attack that the Decepticons are using as a distraction works. It’s enough of an event to get the Autobot’s attention and even though the Autobots don’t have many bots left, Optimus Prime feels compelled to gather a team and shuttle down to the Air Force base and protect the humans. 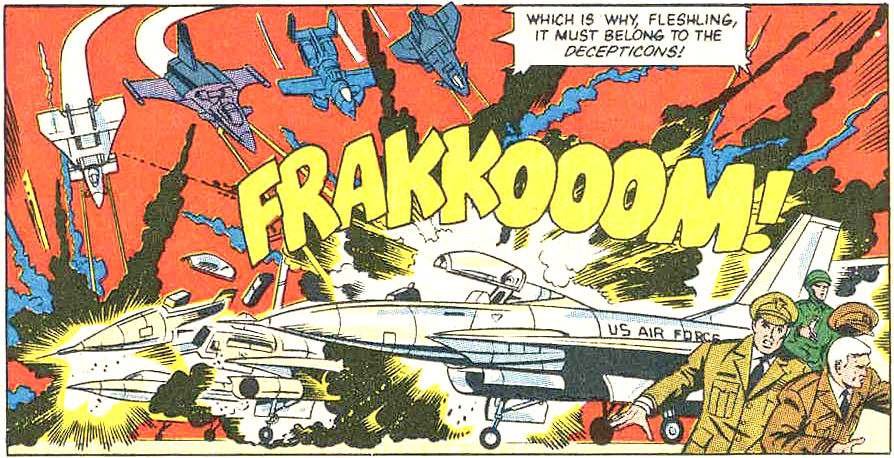 The Decepticon Sports Car Patrol teleport into a nearly empty Autobot Ark using their new Trans-Time Dimensional Portal. Quickly, BlackJack reprograms some Autobot systems from a nearby panel giving him the ability to take control of several dormant Autobots. Not only does he reanimate them but he also provides a voice that results in Ratchet submitting to the physical and psychological stress of the situation. What we are seeing her is all of his nightmares coming true and nearly falls to the attack. But, at the last moment he shakes his guilt away and is able to put up a fight back. He is able to use an emergency cut-off switch to disable the zombie like Autobots, but pauses, worried about the additional damage it will cause to his fallen friends. 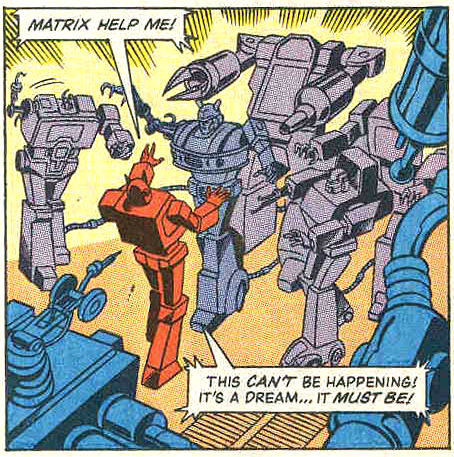 Luckily, Ratchet didn’t have to throw the switch. Blackjack’s stops the attack, worried that Ratchet might not survive and be of no use to the Decepticons. The Decepticons now step up to Ratchet, announcing themselves as the Autobot Sports Car Patrol. The bots announce that they are on their way back to Cybertron and offer to take Ratchet with them. Ratchet is tempted to go as he would have access to advanced medical technologies.

Ratchet, first contacts Optimus Prime to announce his wish to travel back to Cybertron. Communication interference prevents him from getting his message though, but Ratchet decides that the benefits of going out way the negatives of leaving, so he departs with the others. He takes along the bodies of Jazz, Goldbug, and Grimlock to repair. Ratchet, realizes the trap he is in when Blackjack stays behind on the ark and the Micromasters point their weapons at him as he they materialize in Cybertron. But that is the least of his worries. He soon sees and old enemy. MEGATRON! 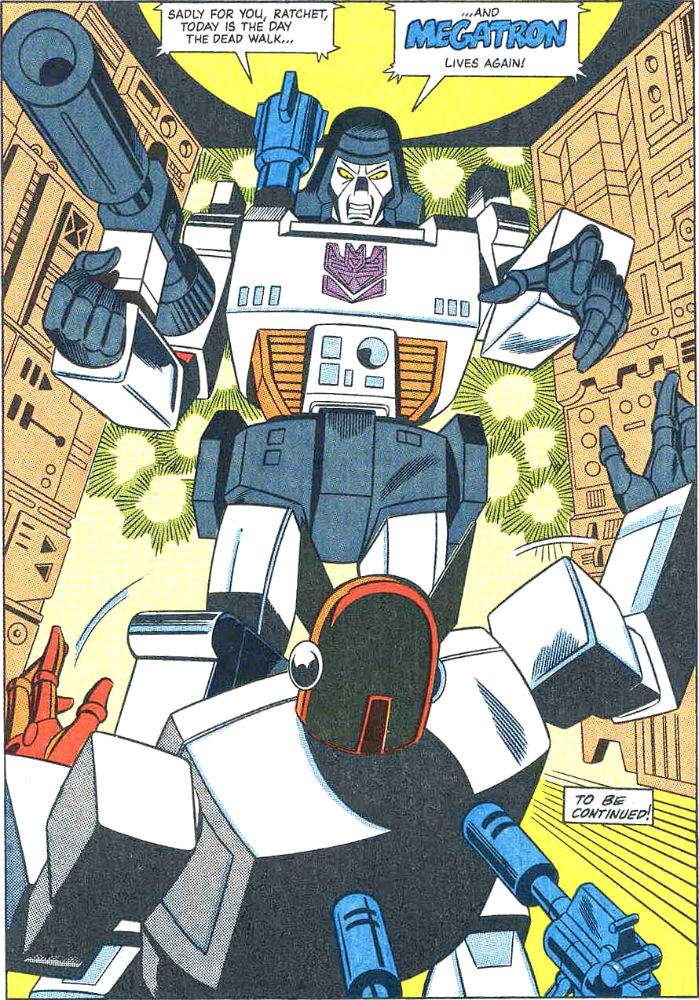 Simon Furman’s first Marvel US comic is a good one. A revitalization. A rejuvenation. A return BACK FROM THE DEAD perhaps. Could this issue title mean two things? The return of Megatron and the return of a great comic with great writing? Who knows. I doubt Simon Furman would admit to that, even if it is true.

I could say a lot more about this issue, but I’m really interested in what you think. Leave me a comment below and lets talk about it.