With issue 52 we return to space! I recall seeing this issue when I first discovered Transformers comics. I remember seeing the cover and just thinking, whoa. A whole expanded world of the Transformers exists. I have to find out what happens! But before we get into the story lets check out the cover art that captured my imagination so many years ago. 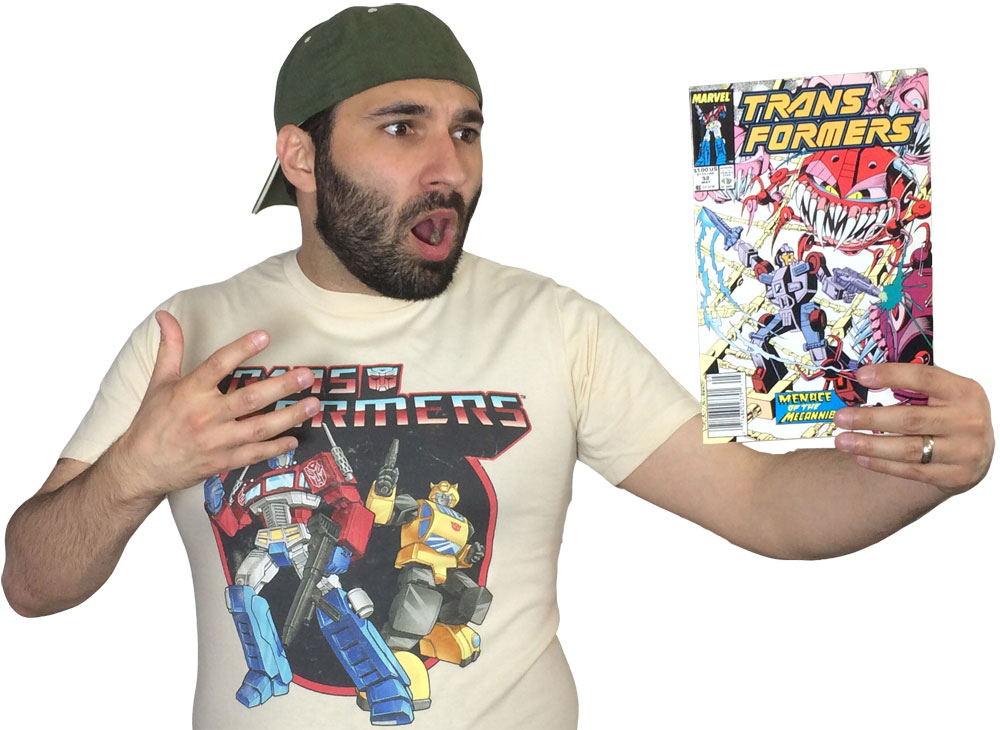 Go Into Battle With Optimus Prime and Bumblee with this T-Shirt from 80sTees.com

This cover just pops! The white background helps the menacing looking Mecannibals jump off the page with their long legs, long sharp teeth, and large eyes. On the cover is also Landmine who is clearly fighting the Mecannibals for his very life on top of a spider web made of metal. I know this is going to sound like nostalgic love but I can still remember the feeling I had when I first saw this issue for the first time so many years ago. A whole world of Transformers I never knew existed and I could not wait to get inside it. If you can look at a crisp copy of this issue I doubt you would regret it. 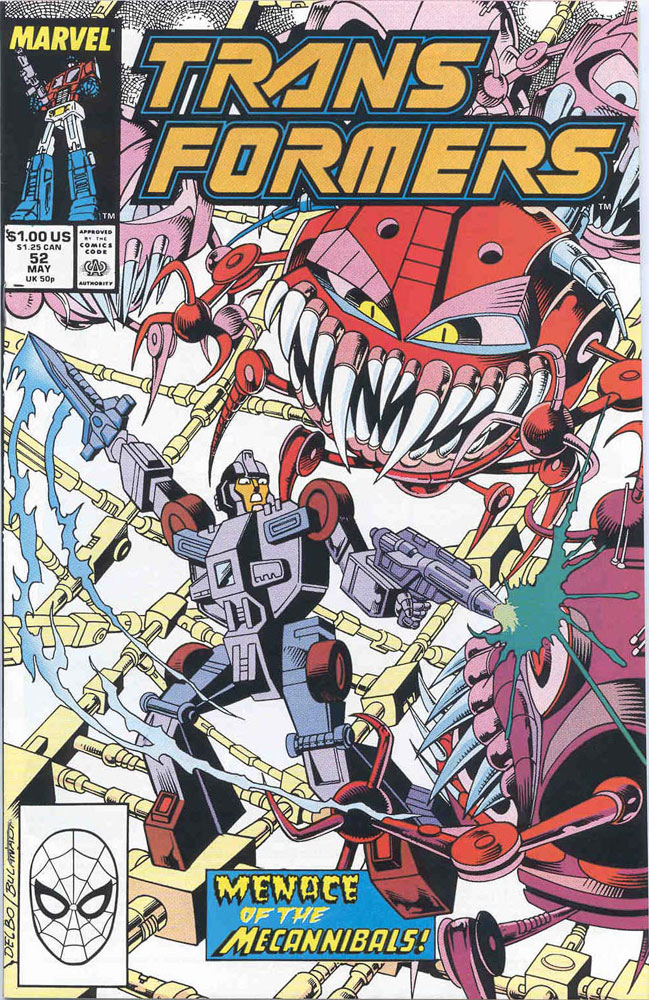 Our story kicks off from the point just after the Underbase story line. Several Autobots are depicted as damaged from the aftermath. Optimus Prime sends out Landmine and Cloudburst, both Pretenders, on a mission to secure several microchips to be used in repairing the damaged Autobots. The Pretenders are sent to Grand Central Space Station where they will try to procure the microchips off the black market. Optimus Prime warns the two Autobots that robots are not welcome on the space station. This is confirmed when the Pretenders enter a local bar on board the space station and a robot, who goes by Chromite, is forced to leave through the space station’s airlock. 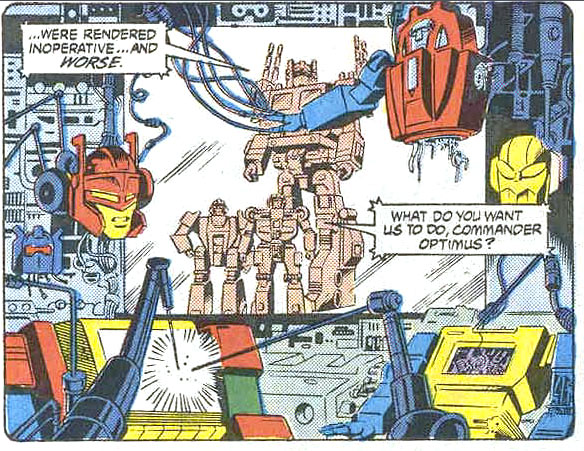 Shortly after arriving the Autobot Pretenders find a couple of ship dealers. The two don’t realize that the dealers are in fact Nebulan Powermasters, Hi-Test and Throttle. The Autobots are also warned by another familiar face to the reader, Berko. Berko wants the two Pretenders that the chip dealers they are working with are not to be trusted. They also learn that a fellow Autobot, Sky Lynx was at the space station but has since gone missing. 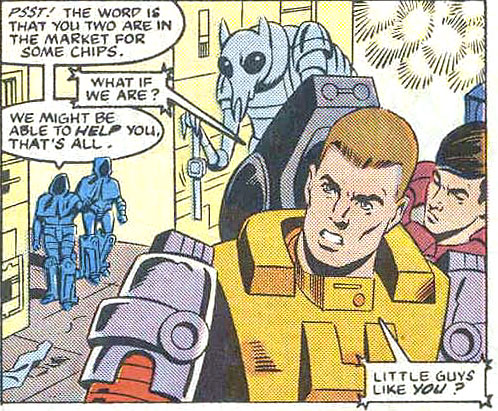 As the deal for microchips progress with the Nebulans, Landmine demands to be taken to their supplier directly to complete their transaction. Soon, the Pretenders find themselves up close and personal with Mecannibals. These spidery like robots are robot eaters. Because the Pretenders look like humans they find themselves safe from the Mecannibals appetite. The two parties agree to do business over Dinner. Dinner turns out to be Sky Lynx!

Landmine’s internal robot forum was staying outside at the beginning of the meeting, but then takes action and frees Sky Lynx. In the confusions, Landmine’s inner robot recombined with his otter shell, unnoticed by the Mecannibals. Afterword, the microchips transaction is completed. 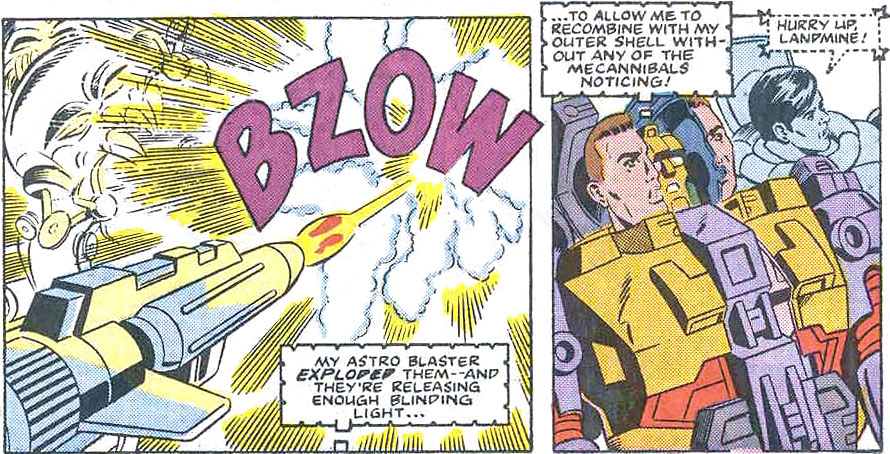 With the mission complete the Pretenders head back to the space station only to reveal themselves to Berko which is observed by both Hi-Test and Throttle. Those two notify the local Bartender so that when the Pretenders go to the bar to settle up Berko’s tab they are quickly overpowered by the robot hating patrons and sent into space through the air lock. 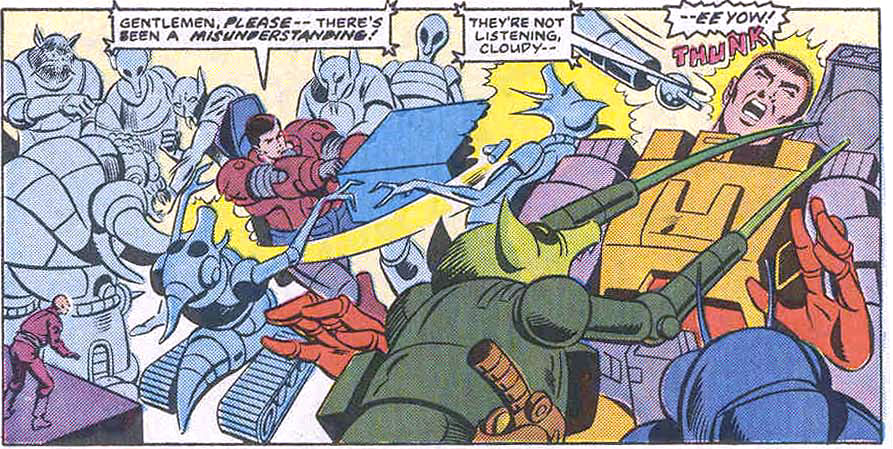 The two are picked up by Dreadwing and taken to the Mecannibals’ ship. The spider like robots now know that the Pretenders are robots and are eager to have them for their next meal! 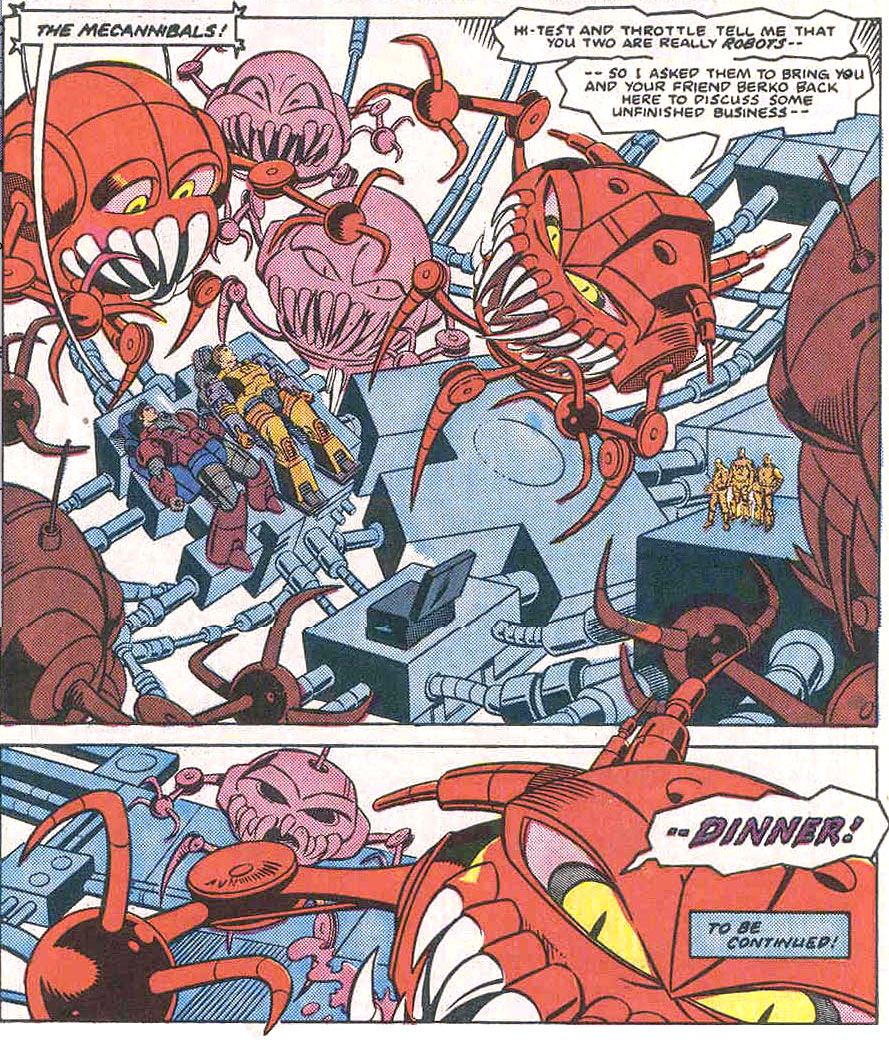 Sometimes, I think I might be reading through these issues to quickly. Keep in mind these issues came out monthly and I’m going through them at a rate of almost one a week. One issue we’re in space. The next issue we’re on earth. After that, we are back in space again! Stories that don’t actually affect each other. Not yet anyway.

What I’m trying to say, in a round about way, is that my mind gets used to being on earth and then I have to make a hard adjustment to being in space with pretenders and Mecannibals. I doubt this was an issue back in the day when readers did have to wait a month from one issue to the next. It gave their mind a chance to process everything and be prepared for the next adventure the following month.

I will say this. The longer I think back over this issue, the more I find myself liking it. One big help was seeing old friends again. Berko and Sky Lynx. Which is weird because I didn’t think I would miss Berko.

Over all I feel the story had a solid idea behind it. Need chips to fix the Autobots. I do question the Mecannibals being in possession of so many microchips. They just don’t seem like a life form that would have so many of them. Unless, when they eat robots they don’t each microchips? Maybe?

Throughout the issue, I also enjoyed the art. It wasn’t fantastic, but I have seen worse in a Transformers comic. I take that as a good thing.

The more I think about this issue the more I’m getting excited to read the next one and find out how this story concludes.

So what do you all think of this issue? Do you agree with me or am I way off base? Let me know when you have a moment. I would like to know.