Issue 32 entitled, Used Autobots, is the story of what Blaster, Goldbug and the Throttlebots do after the Scraplet events of issue 30. Will these Autobots head back to the Ark and confront Grimlock or will they continue to try to pick away at the Decepticons independently? Will find out soon enough. First, lets check out the cover art. 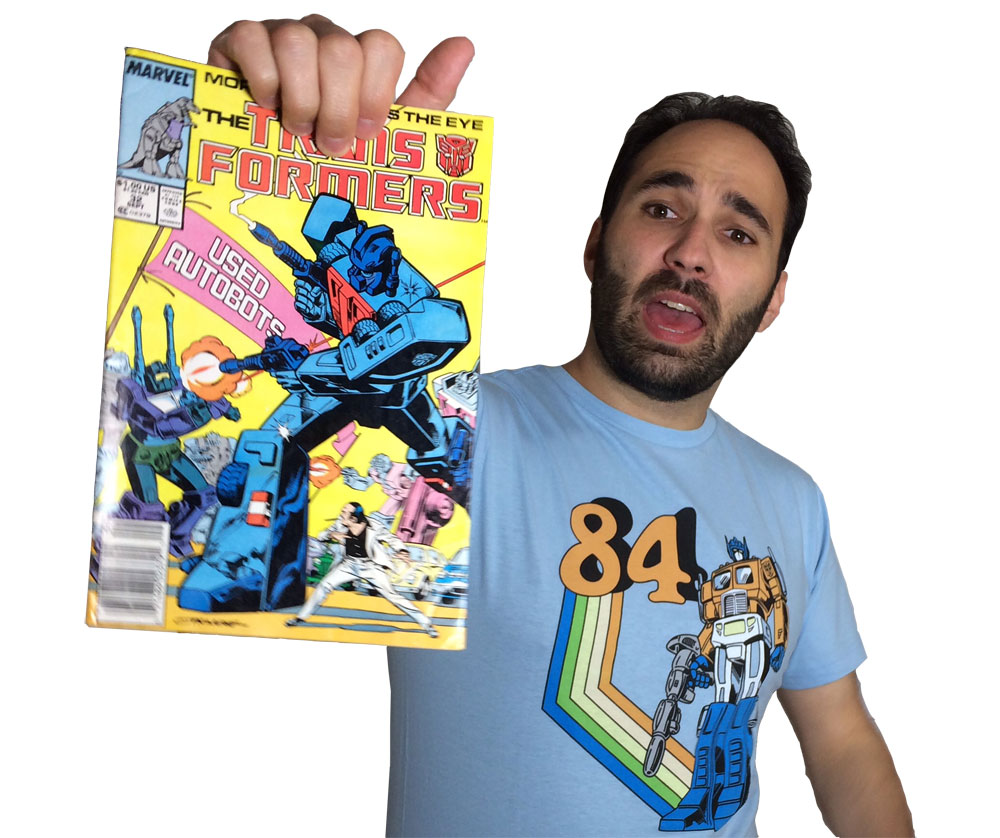 Check out my cool 84 Optimus Prime shirt! Get your own from 80sTees.com

The primarily yellow (have I mentioned how much I hate Yellow?) cover, again, shows the Protectobots fighting against the Combaticons. In the background,  we can see the Throttlebots watching on in their alt vehical modes inside a used car dealership. For all intents and purposes this cover does do a good job depicting the story within. We can also see Big Steve Ludwig, the used auto dealer, looking distressed on the bottom of the cover with a cigar in his mouth. 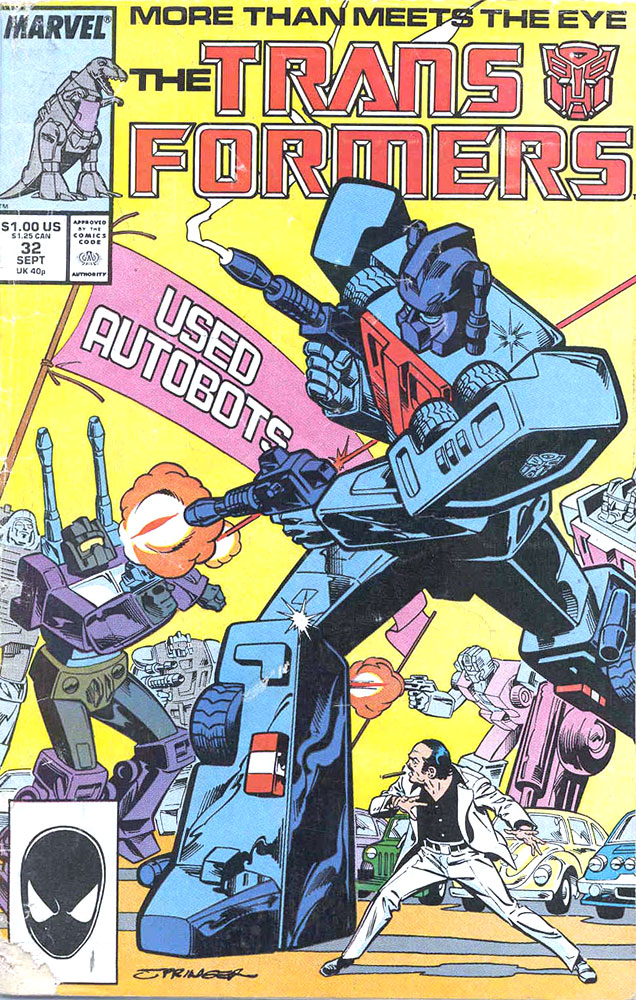 At the beginning of the book the Throttlebots are under attack from a Combaticon named Vortex. Blaster is able to fend off the Decepticon while riding Chase and Rollbar like a pair of skates. The attack however, attracts unwanted human interest. 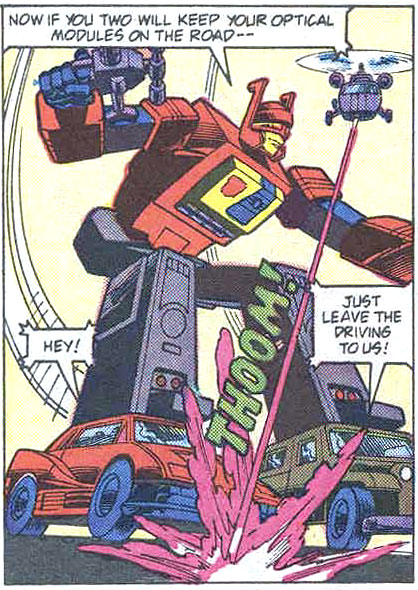 The Throttlebots end up stopping to refuel at a Blackrock gas station, only to be ambushed by RAAT troops. The Autobots are able to escape from the RAAT Trap, (See what I did there?) but the skirmish allows Vortex another chance to attack the Throttlebots. 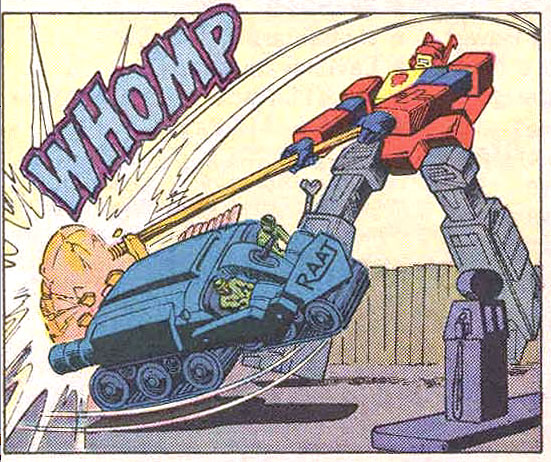 Back at the Ark, Grimlock sends the Protectobots out to retrieve Blaster and Goldbug. 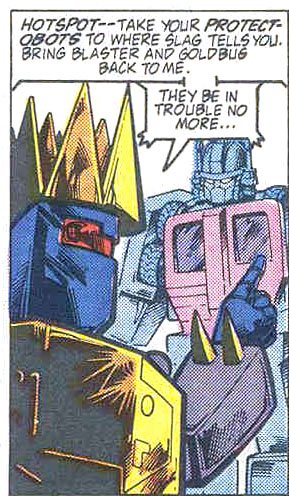 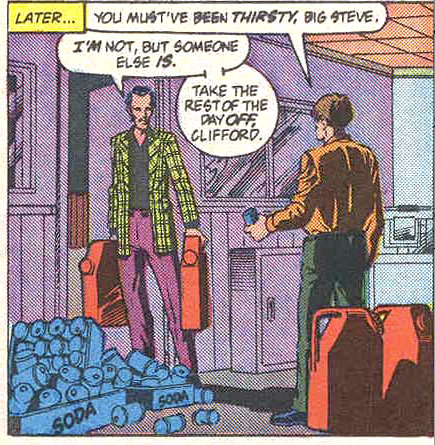 RAAT arrives to capture the Throttlebots. Their plan is interupted by the arrival of the Combaticons, who want to destroy the Throttlebots. Soon after the Protectobots arrive. A battle between the three groups opens up. Mr. Ludwig, tries to save his used car lot by proposing that everyone bid on who gets the take home the Throttlebots. This idea does not last very long as Onslaught radios Swindle to kill Mr. Ludwig. Blaster, seeing Onslaught, fires and manages to mess up Swindle’s aim. The fight starts up again and with all the noise and mess, RAAT captures the Throttlebots and hauls them away. 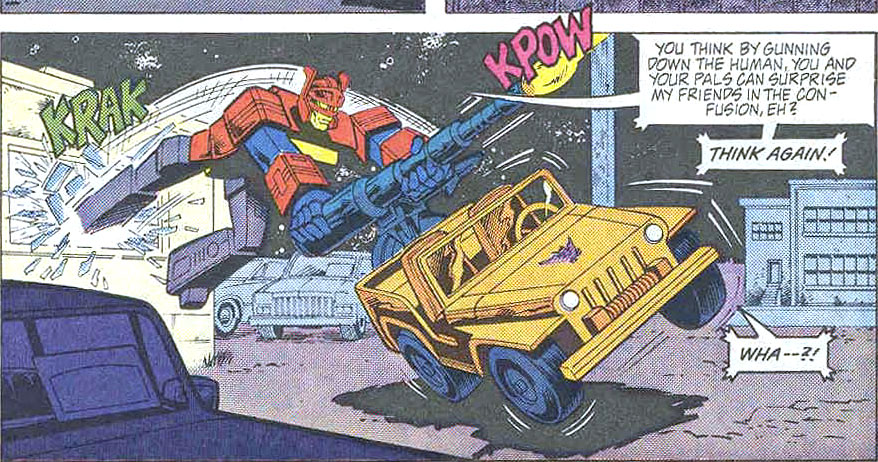 The Combaticons finally retreat and Blaster is taken into custody by the Protectobots for going against Grimlock’s original orders. He is to be returned to ark, tried and executed. 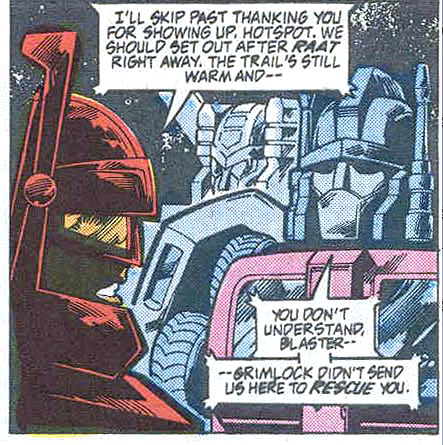 For me this is a solid Transformers story. Again, I continue to be impressed with Blasters character. That is a big surprise to me. I always like Blaster as a toy. I thought he was good in the Transformers Animated Movie. I just never expected to like his character this much. Thank goodness for comic books, right?

There is a lot of action and writing in this issue. Maybe almost to a dizzying degree, but it works.

Grimlock continues to be shown as a royal knob. If Shockwave and Ratbat didn’t have to be so concerned over fuel, it seems they could easily take over the ARK and the Autobots right now.

I am interested to know know what you all think about this issue. I have really been enjoying reading all your comments in previous posts and some of you are adding perspective and insight I don’t have.

Dear Grimlock and Friends,
I just bought #27 and I can explain it in one word: SPLEDIFEROUS!!! I LOVED the appearance of Trypticon!
Now comes the big “why”. WHY DID YOU DO IT? Grimlock? You’ve got to be kidding! But even if you’re not, how long can it last? Grimlock is clumsy, stupid, short-tempered, and has no class at all!
Jonathan S.
Ontario, Canada

Jonathan, give Grimlock some credit! He isn’t that clumsy!

Dear Trans-Missions:
I’ve just finished Transformers #27 and I’m stunned! How could you make Grimlock the leander of the Autobots? Grimlock can barely talk, much less lead the Autobots! Aside from making Grimlock leader, and killing Optimus Prime, I think you guys (and gals) are doing a pretty fresh job!(“Fresh” means good.)
Kenneth Grossgold
Valley Stream, NY

Hey, Kenneth, maybe you and Janathan S. should get together to badmouth Grimlock some more! And thanks for the…um… compliment!

Dear Marvel,
Grimlock as leader of the Transformers?!? Wild! not to mention totally unexpected. Grimlock just doesn’t seem to be the ideal Transformer for the position. I mean, wasn’t Perceptor the leader of the Cybertron Transformers? I’m surprised he wasn’t chosen for the position. Anyway, perhaps with Grimlockat the helm, the Transformers will start to win more battles. That, along with the touch of insight he showed at the end of issue #27, makes me think Grimlock’s the, uh, guy for the job.
Evelyn Korbello
Denver, Colorado

Finally, a vote of confidence for the new leader of the Autobots. Now if he can only inspire some of that same confidence in his fellow Transformers, his job will be easier.

Dear Don, Bob, and the rest,
I just received issue #27 and boy did it cheer me up! I’ve been a collector of both the comics and the figures for about three years now, and in that period Optimus Prime has become my favorite character. Naturally, I was a bit on the sad side when you tragically, and almost insensibly, killed him off. Transformers #27 cheered me up considerably, however, by not only introducting Trypticon in the best possible way, but also bringing back the Dinobots and making Grimlock the leader! I can’t imagine how he’s going to get around town, though…
One very important request I have to make is: more Starscream! He’s my favorite Decepticon, and that guy is just never given a chance. Let’s at least give him a taste of leadership for an issue or two, okay?
Keep up the good work and until Grimlock’s teeth rust, Make Mine Marvel!
Sincerely,
Tori Berquist
San Simon, Arizona

Say, Tori, what makes you think Starscream would settle for only a taste of leadership?

Dear Trans-Missions,
TRANSFORMERS #27 was GREAT! Trypticon finally came to Earth and the Autobots got their best leader yet: Grimlock! There is one problem, thought: the leader of the Decepticons. Starscream is my favorite Transformer and I think he is most worthy to lead the ‘Cons.
I have a suggestion: How about giving Starscream a more powerful body? I already like his personality and I think he deserves a stronger form. Think about it, O.K.?
Tom D’Ambrosio
Bellport, NY

Another vote for Starscream? He’s getting more popular by the minute! Next thing you know, you’ll be asking to make him the Autobots’ Leader, too!

Dear Trans-Missions,
your stories are terrific! your comic is Optimus Prime! When I hear even the slightest Soundwave that your next issue is on the stands I jump on my bike and Blast Off in a Blurr to the nearest comic store. I don’t care if I Sideswipe a pedestrian or kick up a Sandstorm, as long as I get there!
Then I Prowl inside and Hound out the new Transformers issue, and Swoop down to pick up m copy.
If I find out it’s not in on time I’ll throw a Tantrum and go on a Rampage until I find out who’s responsible, and then they will require some First Aid.
Afterwords, I hop on my bike and zoom off like a Bluestreak to get home.
When I get home I kickback and read your fantastic story.
A devoted fan,
Harry Simon
Las Vegas, NV

Well, it sounds like you better HARRYu up and get the next issue! Seriously, thought, don’t you think a subscription would save you a lot of tire-wear? And that goes for the rest of you, too. Think it out -why go to the comic when it can come to you? No muss, no fuss. Every thirty days the United States Postal Service brings you yet another episode in lovin’ Trans-Formers! You may never leave home again! And whattaya think it’ll cost? Twice as much? Three times as much? Would you believe that you get more for less?!? We wouldn’t josh ya on this one, folks. You save 17 cents every issue over the newsstand price when you subscribe! Over a year’s time that’s $2.00! And that translates into a savings of $150.00, based upon a life expectancy of 75, which is actually a little low, considering that your never leaving the house again definitely reduces the chance of your getting flattened by a bus!

Dear Transmissions,
I just picked up Transformers #27, my first issue ever! I’d heard , but I’d never seen an issue until now. I loved it! The writing was witty and entertaining, and the art was very exciting and clear. I don’t know who “Optimus Prime” Was, But he seemed to have been a very respected and wise leader. I’m sorry to have missed him. Which brings me to my next point – I’d like to catch up on all the issues I missed. can I order them from Marvel?
Brian Kingman
Amherst, Mass

Sorry, Brian, but we don’t keep back issues for sale here at Marvel. try one of the comic book specialty shops, some of which advertise in these very pages. Now that you’re a Transformers fan, you won’t want to miss an upcoming HEAD-MASTERS Limited Series, written by our resident scribe, Bob Budiansky, and drawn by Frank Springer and Akin and Garvey! it’s the same Transformers action with an exciting new twist!

Dear Transformers:
Transformers #27 had only one problem: You sent Trypticon back to Cyberton at the end! Will he be returning soon? Will that girl Rachel be showing up again in the future, and will she play an important role? And WHERE ARE THE TRIPLE-CHANGERS?!?!?
That’s all I want to know for now.
Dante Rudnik
Mahwah, NJ

You’re full of questions, Dante, but all we can say for now is… Keep your eyes peeled! Things may start happening sooner than you think!

Dear Trans-People,
Transformers #27 was possibly the best yet! the stories continue to enthrall me, and the art gets better every issue. I’ve been waiting for Trypticon’s arrival on Earth for some time now, and now that it’s finally happened, it’s all I hopped for – and more! the way the dinobots battled hime was very courageous (even if it was for a less-than-noble cause). I hope Trypticon returns soon-but just so that the Autobots can teach him who’s boss! In my opinion, Omega Supreme would turn Trypticon into a pile of scrap.
James Andrews
Stratton, N.Y.

Well, James, We’re sure Trypticon has some opinions on that subject, too! 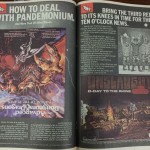