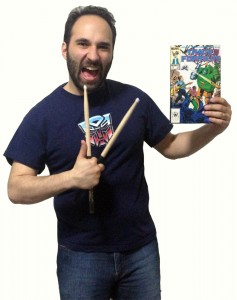 I can’t help but think that the person or persons behind the story in Transformers issue 14 are Bruce Springsteen fans. I say this because one of the characters is a rock star named Brick Springhorn, or Brick Springstern if you’re sharp enough to notice the spelling change/error. It also seems like a lot of the songs this rock star sings in this issue sound a lot like Springsteen hits. Songs like, “Dancing in the Night” “Born to Ride” “Born in America” and “Margarita (Jump a Little Lighter)“. With issue 14 we pick up shortly after the last battle of issue 12 and introduce a handful of new Autobots to the mix. Things get hairy when the new Autobots encounter Decepticons on what is supposed to be a simple training exercises to get them accustom to earth. But first, lets check out this cover art.

The Transformers logo is blue with a purple border and a purple Autobot logo. The white sky background allows for the rest of the images on the page to pop out at you. Hoist, is center stage (pun intended) holding up some damage scaffolding to protect Brick Springhorn and his band.The audience below the stage looks on in awe and confusion. An unidentified jet fires at hoist in the background

The comic opens up with a full page display of Jetfire getting branded with the Autobot insignia. Optimus Prime brought Jetfire to life and with the “Right of the Autobrand” he becomes one of the newest members of the Autobots.

In this issue Optimus Prime says something very profound that I think is worth quoting here.

“By commanding, it is I who serve. For that is what the other Autobots ask of me. If ever they should want me to step down, I will. If ever you want to leave, you may. That is the right of every Autobot.” 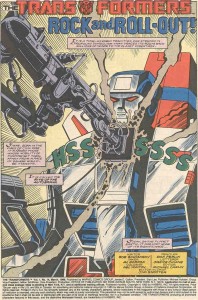 I think that really does a great job of explaining to the reader who Optimus Prime is and what the Autobots are all about.

Optimus Prime gives Jetfire a tour of his new home within the Ark. They walk into Ratchet’s medical bay where he struggles to repair several Autobots who where damaged in issue 12. In another part of the Ark five new Transformers have been constructed. Loaded up in their minds are the memories of five Autobot warriors. Minds that where copied and saved before the Autobots left Cybertron. Optimus Prime welcomes the old Autobots in their new forms. Their names are Grapple, Hoist, Smokescreen, Skids, and Tracks.

Optimus Prime sends out Hoist, Smokescreen, Skids, and Tacks with Bumblebee to get acclimated with their new surroundings. He holds Grapple back for him to be involved in another project. While they are out in the world the Autobots test out a new disguise installed by Wheeljack. They now have a new facsimile circuitry that covers up their Autobot symbols and places a mannequin in the driver seat. 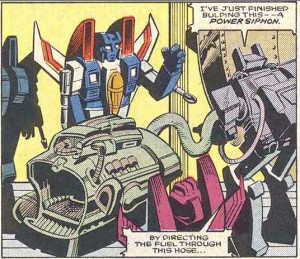 Back on the Blackrock Oil-drilling platform Shockwave returns. He quickly stops Starscream’s complaining about Decepticon leadership and proceeds to show off a new power siphon he has built. Shockwave can use the device to turn the oil from the platform into energon cubes. With the power siphon the Decepticons leave the oil platform detonating one of the energon cubes in front of the surrounding naval fleet allowing them to fly off with out being attacked. 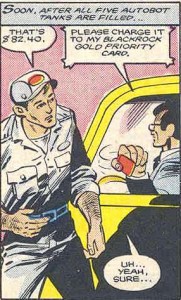 The Oil Platform has been bugged by the humans. They hear all about the Decepticons’s plans to steal a large release of sonic energy. The Autobots are alerted by G.B. Blackrock.

During a refueling at one of Blackrock’s many gas stations, Bumble and crew learn about an upcoming rock concert. They start to think this might be where the Decepticons will attack and head out to gather information while Optimus Prime heads out to the concert bringing reinforcements.

At the concert, Bumblebee and the other Autobots observe a sonic disruption during the show. They are under orders from Optimus Prime not to take any action until he and his reinforcements arrive. But the disruption device is causing problems for the show and the Autobots choose to act against orders. They get the sound of the show back to normal which causes several Decepticons jets to burst out from the ground.

The Autobots defend the people at the concert as gun fire breaks out. The Decepticon jets are fought off. Hoist repairs the stage from the attack. Bumblebee discovers Shockwave’s new power siphon and is able to use energon cubs to fight off shockwave. The crowd looks at the amazing display of fire power and think it is part of the concert. The Decepticons flee  and the Autobots go back to hiding behind the concert.

While heading back to the Ark, Bumblebee and his team meet up with Optimus Prime and his reinforcements. He expects to be punished for not following orders. Prime, being impressed with his team’s performance does not punish Bumblebee.

In several of the issues of Transformers they reprinted fan letters and sometimes answered them. These are the letters that where printed up in issue 14. 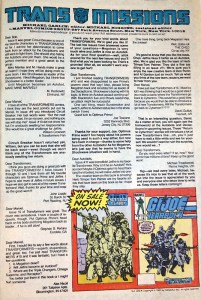 Photo of Transmissions from Transformers issue 14

Dear Bob,
Issue 9 was great! Circuit Breaker is one of my favorite characters in TRANSFORMERS so far. I admire her determination to come back from an attack by the Decipticons and still want to fight them. She should stop hating the Autobots and join them. She would be a perfect member and a great asset to the group.
Mike Manley and M. Hands make a great art team!! I hope they will be doing more issues soon. I like Shockwave as leader of the Decepticons. I liked Megatron, but I think that Shockwave is a better leader.
Until Megatron becomes and Autobot, MAKE MINE MARVEL!! – M. Rockowitz, Elmhurst, NY

Dear Marvel,
I hae all the TRANSFORMERS comics. I think they are the best comics put out by Marvel. In issue #9 you introduced Circuit Breaker. Her last words where: “But the next time we meet, I’m on my own, and nothing you say will stop me!” Issue #10 did not show her but I’m anxiously awaiting her reappearance. She would be a great challenge for Jetfire. – William Crowson, A Transformers Fan

Circuit Breaker hasn’t returned yet, William, But you can be sure that she will be back soon – even though we don’t think any of the Transformers are anxiously awaiting her return.

Dear Transformers,
I think you guys are doing a great job with the TRANSFORMERS! I have issue 1 through 10 and I love them all! My Favorite characters are Optimus Prime and Jetfire. I hope to see more of Jetfire in future issues. I hope we also get to see all the newer Transformers! Well, thanks for your time and keep up the good work!!! – John Lisidki, Port Reading, NJ

Dear Marvel,
Issue 10 of Transformers was great. The cover was sensational. I have a couple of requests, though. Put Optimus Prime’s head back on his body and bring Megatron back as leader…if he is still alive! Stephen D. Perkins, Cordele, GA

Dear Marvel,
First, I would like to say a few words about TRANSFORMERS – Superb, stupendous, and great, too. I’ve just read TRANSFORMERS #10 and it was fantastic, but I have a few questions.
1. Is Megatron dead?
2. Will Jetfire become an Autobot?
3. Where are the Triple Changers, Omega Supreme, and Perceptor?
You better put them in this book or i might hurt someone. – Alex Nicoll, Bloomington, IN

Thank you for your kind words about TRANSFORMERS. We’re glad you like it! The last few issues have answered some of your questions – Megatron is very much alive and Jetfire is now an Autobot. As for your final questions – well, stick around for the next few issues and you’ll find what you’ve been looking for. That’s a promise! After all, we wouldn’t want any one to get hurt!

Dear Transformers,
I just finished reading TRANSFORMERS #10 and was disappointed to see Prime’s powers used that way! Also, please bring Megatron back and reinstate him as leader of the Decepticons. Shockwae is boring with his logic. Is there an Autobot assault coming up? With Blackrock’s fuel and Prols leadership, an attack might be successful.
One last thing, repair Sunstreaker and switch J to Autobot status like in the show (which I love).
Good Luck to Optimus Prime. – Joe Toscano, Jersey City, NJ

Thanks for your support Joe. Optimus Prime wasn’t too happy about his powers being used in such a way either, but now he’s back in charge – thanks to some help from the other Autobots! As for Megatron, let’s just say that he seems to have the Shockwave situation well in had.

Dear Autobots,
Issue #11 was incredible! Jetfire is my favorite Transformer. Why isn’t he an Autobot? He’s so cool! Maybe if Optimus gets his head back (and he’d better), he will make Jetfire into one.
The creative team on this book is amazing! Herb Trimpe/Tom Palmer are my favorite artists that have been on this book so far. I hope they stay.
One more thing, bring back Megatron! He’s the Jinkiest!
Well, Gotta roll – THE CHED, Co-op City, NY

It’s good to know that you like the book, Ched, Jetfire likes it better as an Autobot, also. We’re glad you like the team of Herb Trimpe/Tom Palmer. They did a fine job filling in on issue #11. We’re sure you’ll enjoy the new creative team of Don Perlin and Al Gorden just as much. Tell us what you think of the new team, readers, we want to hear from you.

That is an interesting question, David. As a matter of fact, you will again see the homeworld of the Autobots and Decepticons in upcoming issues. These “Return to Cybertron” stories will introduce a lot of new Transormers like… oh, you’ll just have to wait a little while and see for yourself. We wouldn’t want to ruin the surprise, now would we…?

Dear Transformers,
Do you read every letter? If so how? Your comic has millions of fans!! Keep up the good work! – Michael Trzaskowski, Parma Heights,OH

Yup — we read every letter, Michael, because it’s nice to see that all of the work put into this issue is appreciated by you and everyone else who takes time to write us. Keep those letters coming!!!