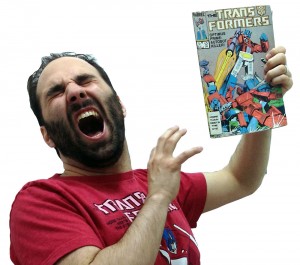 The cover for Transformers issues 12 shows an unforgiving Optimus Prime standing above his Autobot comrades as he blasts them.’Optimus Prime: Autobot Killer’ is written in bold black text on the left side of the cover just under the yellow and white Transformers logo. This attack appears to take lace on an open field in the middle of no were.

Using the power of the Creation Matrix in his mind, Buster directs Jetfire to take him to the Decepticon base currently located at Blackrock Aerospace Assembly Plant Number One. In an attempt to avoid being show down by military aircraft, Buster is knocked unconscious. This causes Jetfire to revert to his programming and deliver Buster to Shockwave as originally programmed so the Decepticons can use the Creation Matrix inside Busters head.

At Blackrock Aerospace Assembly Plant Number One, Buster come around and is able to use the Creation Matrix to take control of Jetfire again and uses him to take out Shockwave. Then he uses Jetfire to return the real head of Optimus Prime to his body. Optimus is able to pull off the fake head from his body and reattached himself. He then proceeds to dispatch Soundwave’s minions. 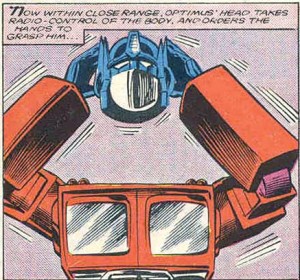 Shockwave recovers from his battle with Jetfire and transformers to find Prime and finish him off. The ensuing battle results in prime throwing Shockwave into the swamp where he sink in and is left. The Autobots beg Optimus Prime to blast away shockwave so he can never return. Prime does not. Rather he races off to the Aerospace Pant to save Buster. Prime feeling very loyal and grateful to Buster, feels this is something he has to do right away.

When Optimus Prime arrives at the plant he discovers that Buster has been rescued by the plant’s human workers that had been enslaved by Shockwave previously. Buster returns the Creation Matrix back to Optimus Prime. The comic book ends with Optimus Prime thinking about the fact that innocent human lives are in danger because of the Transformers war.