After my first reading of Transformers 67 the phrase that comes to mine is, pallet cleanser. It’s a good story. It’s a story that feels like you walked in on the middle of someones conversation and you’re trying hard to catch up. But before I dive into the issue, lets check out this Jim Lee Cover.

Amazing Transformers T-Shirts Can Be Found At 80sTees.com!

I love the detail of this cover, but I wasn’t sure how to describe it. After reading other people’s reviews of this issue and description of the cover, I can’t say I agree with any one person a hundred percent. What I see is Galvatron, flying away from a yellow colored Earth that appears to be on fire not unlike our sun. The Earth looks as if it is just mere seconds from exploding. “The War Is Over—-And The Decepticons Have Won! Coming off the last issue this does not make sense. Not until you read the issue. It’s worth noting that we’re looking at some of Jim Lee’s early work here. I would love to see his version of this cover done today. Maybe if I’m ever lucky enough to have him fill out a blank sketch cover for me I’ll ask him to do that. I would imagine the guy is to busy for that though. 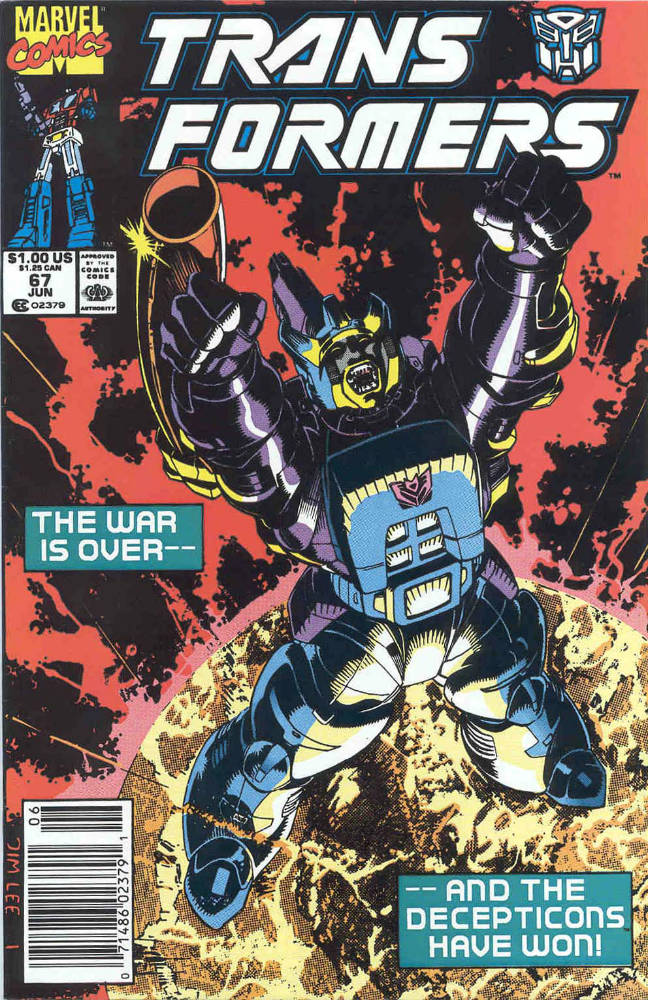 The year is 2009, and Cybertron is no more having been eaten by Unicron in what appears to be an alternate possible future story. The Decepticons have been given Earth. Galvatron, along with several Pretender Monsters enter New York City to search the ruins for any remaining Autobots. Here is where he discovers Rodimus Prime, strung up between two stumps of what used to be the World Trade Center. 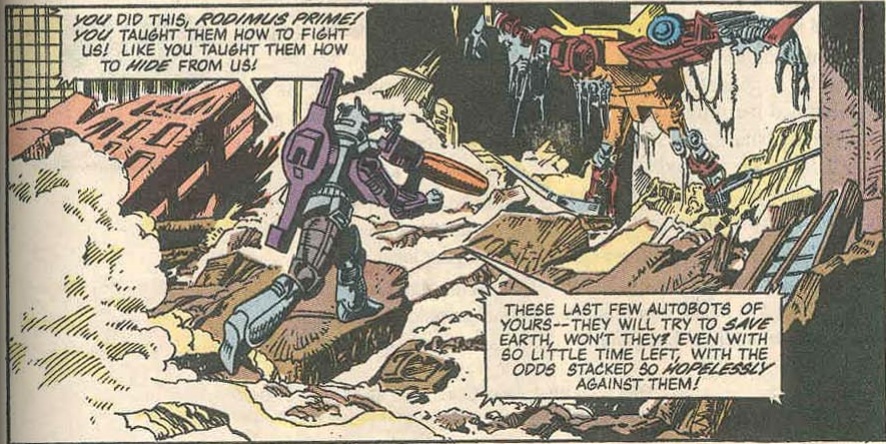 Here the story cuts to Spike Witwicky and a small group of surviving Autobots making their way to a Decepticon Base. They are running against the clock as the remaining goverments of the world are set to launch their nuclear weapons against the Decepticons. The result of which will Annihilate North America. Little do these goverments know that the Decepticons are prepared for just such an attack. 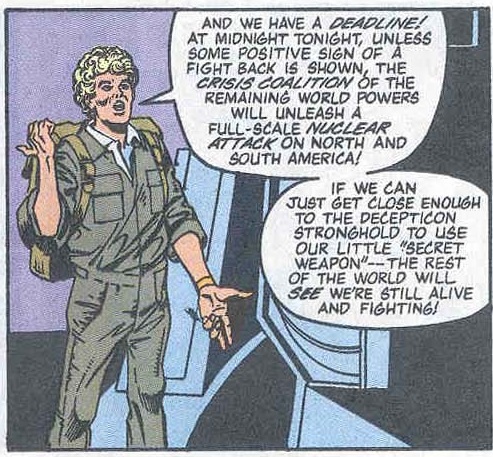 The Autobots attack the Decepticon base providing the distraction needed for spike to carry out carry out the missions goal and secret weapon. To raise an American flag and show that America is still fighting. This act causes the world’s remaining governments to halt the launch of their nuclear attack. 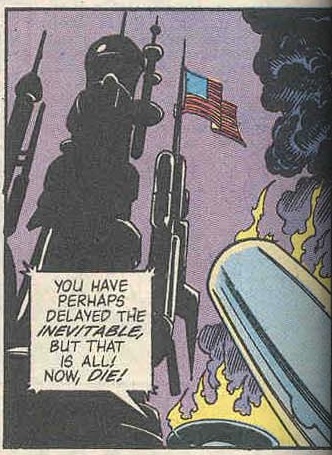 Galvatron aims to make short work of the flag gesture when Hook, Line, and Sinker appear to drag the Decepticon leader back through time. 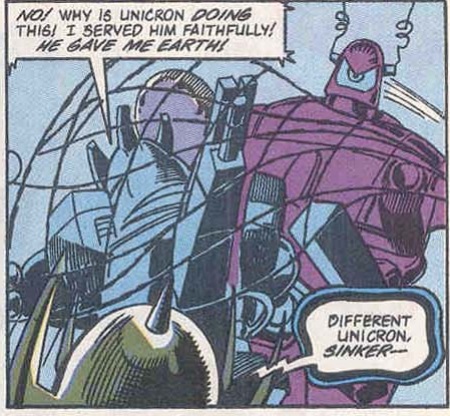 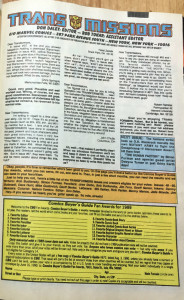 In issue #57, at the end you showed Megatron holding a destroyed Starscream. However, in issue #50. before Starscream blue up, he grew about fifty times his original size. In that picture with Megatron, he was normal sized. What I reckon happened is that Starscream never really grew, there was just a large outer shell that formed around him. When the outer shell was destroyed, his inner self took very severe damage, but was not destroyed. What do you reckon?

Good, very good. Plausible and well worked out. Wrong, of course, but very good nonetheless. Starscream did grow, but when the power of Underbase left his shattered remains, he reverted to his normal size.

I’m writing in regard to a time crossover story…Go for it! I hope it’s as great as past issues (such as #24, #26, #41, and #51) (to mention but a few). I love what the UK TRANSFORMERS have done in combining the past, present and future characters within their great storylines (I have a very few treasured issues, including one episode of “Time Wars”)). I’d like now to bring up a goof you made in issue #56. When Ratchet was taken to Cybertron, he commented that Jazz, Goldbug and Grimlock weren’t going with him. But in issue #57, they were there. Try and be more careful about things like this, huh?

Ah Ha! Thought you’d got us there, didn’t you? Well, in issue #56, when Ratchet says, “aren’t you coming with us?”, He’s actually referring o Blackjack, who stayed aboard the Ark. The deactivated bodies of Grimlock & Co. came with him. Heh–these letters pages are great… we always get the last word!

I’ve figured out a way for you to bring Galvatron into TRANSFORMERS… now! The Galvatron that Megatron became in the movie was just a production line copy, to which-at some point-Unicron stole the designs (or a Quintesson did and passed them to him). So, the original Galvatron is on Cybertron, serving as Decepticon emperor. In the future, Megatron takes on the original Galvatron and defeats him. Then, when Unicron turns up, Megatron is transformered into the new Galvatron. No one knows whether the original Galvatron was really destroyed, so it may be the after 2006 there are two Glavatrons running around!

Ah, well-that makes it perfectly clear! When we introduce Galvatron we’ll try and keep it down to one of him, in one time, for one reason. Sheesh! Why is everyone so keen to write this comic for us?

I just got issue #60 through #62 and I have to say you guys are doing an excellent job! You finally introduced Unicron, my all time favorite cosmic entity from TRANSFORMERS: THE MOVIE! The storyline is getting really exciting now. Simon, you’re doing a wonderful job! Also the art is getting much better (Way to go, Geoff).I’m really glad to see you’re concentrating more on the Transformers than on the “puny fleshlings”, as Megatron would call them. Also, it tickles me to death that you’re introducing Galvatron in #67! Boy, this I gotta see! All heck’s breaking loose now! Keep up the fabulous work, guys!

Glad you’re enjoying TRANSFORMERS< Robert. But to be honest, you ain’t seen nothing yet! Note: please remember, if you want your full address published, you must say so.   Robert here did, and the address is there for all to see.

This is an interesting story and it works because the 1986 movie had introduced us to these characters. It was a nice change of pace, and I’m sure Simon Furman has some kind of master plant to tie this all in together. Though, I couldn’t help but get a, ‘Days of Future Past‘ vibe from this issue.

Art was great. Seems like every time I see Jose Delbo come back to the Transformers his art just gets better and better.

Though the story was good and solid, it left me with a lot of questions. What of Galvatron? What of the bots and people of this time line? Will these questions ever get answered? I hope.

What did everyone else thing of this issue? Lets talk about it below. I would love to hear it.