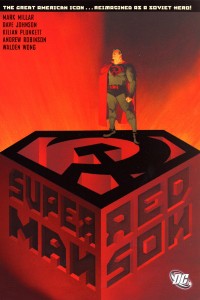 What would have happened if the rocket ship carrying the child Superman had left Krypton just twelve hours later? Because of the Earth’s rotation, Superman would have landed in the Soviet Union‘s Ukraine region. Rather than fighting for truth, justice, and the American Way, Superman is described as the Champion of the common worker who fights a never-ending battle for Stalin, socialism, and the international expansion of the Warsaw Pact.

At least that is the theory behind the DC Comic’s, Superman: Red Son. The result is a very different world then we are used to thinking about in regards to Superman comic books.

This was a great read. I really enjoyed it cover to cover.