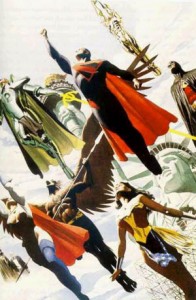 This last weekend I finished reading “Kingdom Come“. Which is a comic book mini-series that takes place in the future with an aged Superman and Batman. The story is great and the art is nothing short of amazing. I have been reading a lot of these comic mini-series lately and so far have enjoyed them all.

Kingdom Come is a four-issue comic book mini-series published in 1996 by DC Comics. It was written by Mark Waid and painted by Alex Ross, who also developed the concept from an original idea. Set some 20 years into the future of the then-current DC Universe, it deals with a growing conflict between “traditional” superheroes, such as Superman, Wonder Woman, and the Justice League, and a growing population of largely amoral and dangerously irresponsible new vigilantes. Between these two groups is Batman and his assembled team, who attempt to contain the escalating disaster, foil the machinations of Lex Luthor, and prevent a world-ending superhuman war.

I think of this story as a big “What if” story. It’s wroth the time to pick it up and read it. I would like to talk about it in more detail. I am just worried about ruining it for people who have not read it yet. But it’s a good book and if you get the chance I hope everyone will read it.