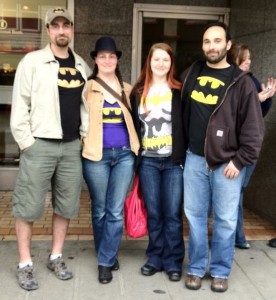 Standing in Line to see ‘The Dark Knight Rises’. All of us are wearing Batman Shirts

I went out to see the new Batman film, The Dark Knight Rises with some good friends of mine. I am going to save my thoughts regarding the film for another time. Christopher Nolan’s version of Batman in the three films have been great. Don’t get me wrong. Nolan writes great stories and directs great movies. Very few people would deny him that honor. He brought Batman back to the movies after Joel Schumacher destroyed the capped crusaders with Batman Forever (1995) and Batman & Robin (1997). But the recent Batman films are more about the villans than the hero. 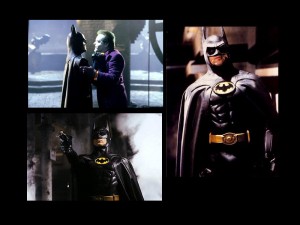 Christopher Nolan’s Batman films have you rooting for the bad guys. Batman plays catchup through all his films while all the villains steal all the scenes. I think this is, in part, due to the actor, Christian Bale who has played Batman in the Nolan films. If it where possible to switch out Christian Bale with Michael Keaton, who played Batman in the Tim Burton films, I think I would feel a lot different about the recent Batman movies. I am sure I would still like them, but I think they would be a lot different and I would be seeing movies that where more about the hero and not the villains. 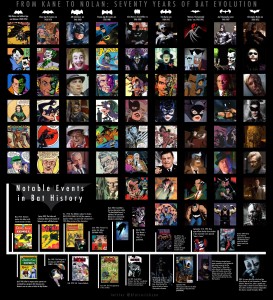 Now I know I am over simplifying things here and this is just my option, but if I could pick one actor who played Batman who is my favorite. That would be Michael Keaton hands down. He really did an amazingly fantastic job playing the capped crusader in the 90s. I have read roomers that Warner Brothers wants to do a movie adaptation of Batman: The Dark Knight Returns by Frank Miller.

For those of you who have not read this comic or the graphic novel, its a story of an older Bruce Wayne who is retired but takes up the mantel one last time. I just think that if Warner Brothers move forward with this film that Michael Keaton would do a fantastic job.