The people at Dreamworks and Paramount are pretty darn cool. (Expect for Michael Bay when he is making a Transformers movie) I recently had a couple of questions about “The Kite Runner” movie. I wanted to ask about a song I could not find on the sound track as well as find out what font was used in the opening credits of the movie.

Not knowing who best to ask these question, I ended up going to the kite runner website and e-mailing the contact address they had. I wrote out a very polite e-mail asking if someone could tell me about a particular song I could not find on the official soundtrack to the movie. Also if someone could tell me how to find the font that is used in the opening credits. I wrote out this e-mail completely expecting it to get lost in someone spam or trash folder.

Within a few hours I got a response back to my surprise. I was asked some more detailed question about the song and the font to help the people at Dreamworks and Paramount find answers my questions.

After a few days of correspondence they where able to tell me where I could find the song that was in the movie. Score one for me! (It actually was on the sound track. The part they used in the movie was on the second half of the very last song. I just didn’t listen to that song all the way through I guess.) 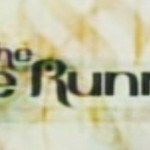 But the thing that impresses me most is how several people from Dreamworks and Paramount did not hesitate to help me out one bit. They really went out of their way to e-mail me and help me answer my questions.

If anyone out there in the cloud happens to know what font this is, please shoot me an e-mail or leave a comment.