Today we’re going to talk sketch covers with comic book artist Brendan Cahill. Mr. Cahill has done work for IDW’s Transformers for years. For me, he was the perfect choice for my special sketch cover commission

Turning a TESLA Model X, into an Autobot.

I like to think that if the Transformers were a toy line and cartoon that came out today, rather than in 1984, that one of the transformers on the Autobot’s side would have chosen a vehicle alt mode of a TESLA. I mean, why wouldn’t advanced robots that crashed landed on earth choose one of the most advanced vehicles of our times for their alt mode? It just makes sense to me.

So, knowing that Mr. Cahill would be attending TFCon Chicago last year, I contacted him with my request.

I sent him an e-mail stating that I would like to have him draw on my sketch cover a G1 Autobot Transformer as a Model X in both vehicle and bot mode.

Along with my e-mail, I also provided images of a TESLA Modle X and examples of how I would like both modes depicted on the cover.

I came up with the name VOLTIC from playing Grand Theft Auto 5. You see, in the game, you can drive around in their version of a TESLA, called the COIL. in the game, the Coil car company makes a car called the VOLTIC. And that’s where I got the name for the TESLA Autobot.

Well, after I sent Mr. Cahill my request, he accepted it and a little while later I was sent a picture of the finished sketch cover. The thing came out brilliantly. I love how the Transformer looks. The circled: Introducing Coil is just perfect and Mr, Cahill added some very nice details, like rockets on the gull wing doors. It’s just great. 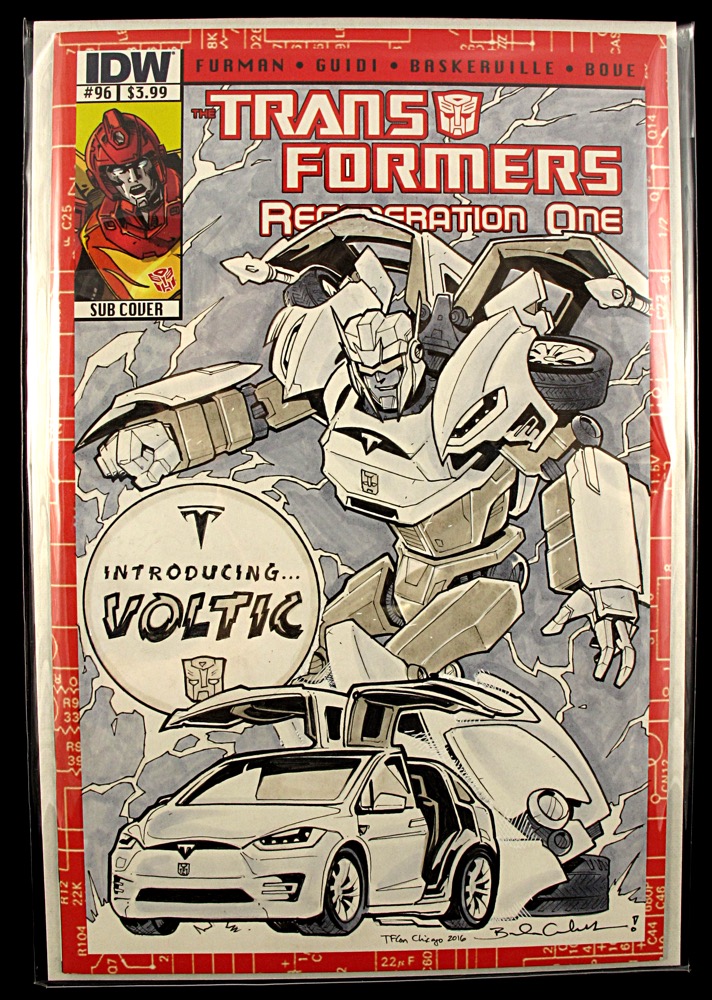 I was so excited about how this cover turned out I shared it on the TESLA subreddit where it stayed the number one post for most of the day. TESLARATI, a popular TESLA news site, saw the Reddit post and contacted me to posted a piece about my Voltic sketch cover.

This sketch cover has had quite a bit of attention. So let’s go chat with Mr. Cahill about working on this piece and sketch covers in general.

Yoshi: Why don’t we start out real quick talking about this.

Yoshi: It’s a Regeneration One sketch cover. You have done a version of a TESLA for me.

Yoshi: This doesn’t exist. You had to make this up?

Yoshi: The car exists, but you had to make it up.

Cahill: I made up Voltic’s robot mode. 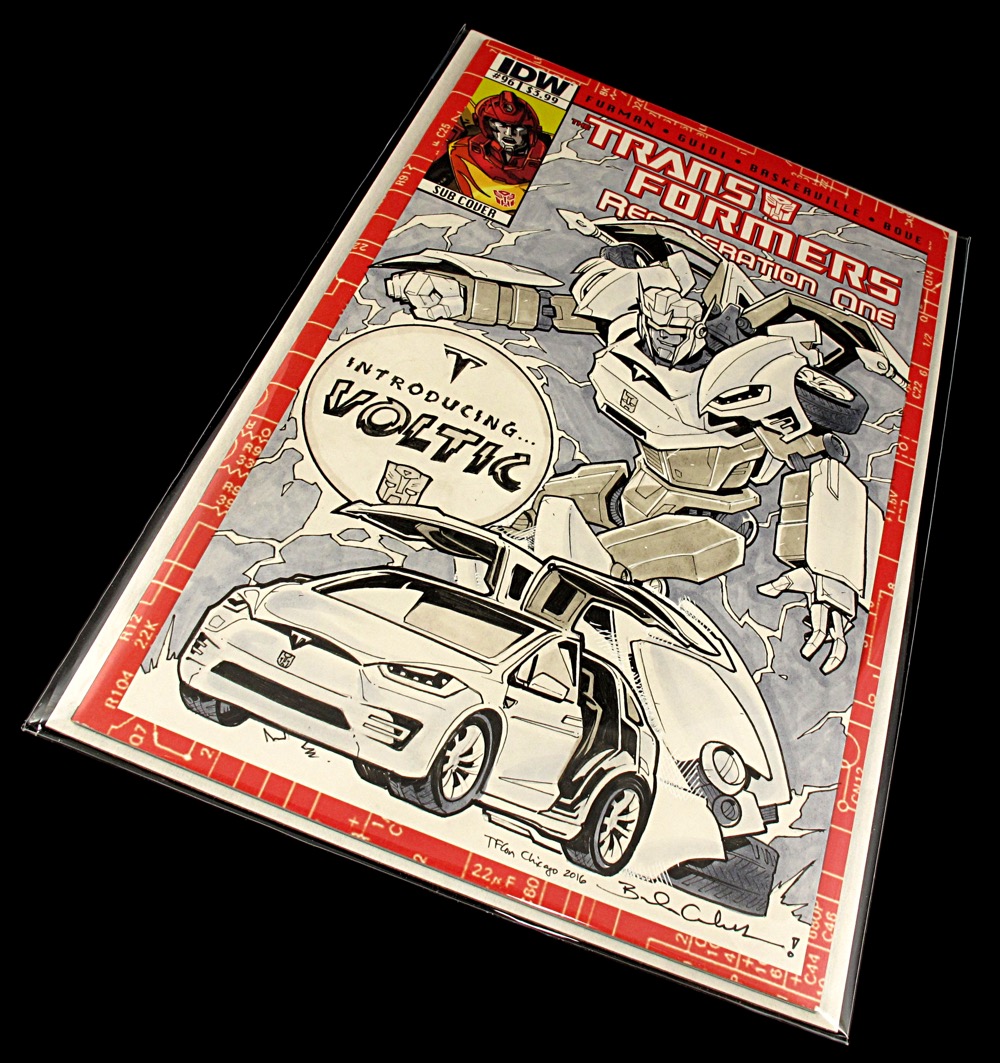 Cahill: Yeah. Yeah. I like doing all kinds of things. This is just a slightly different creative exercise than drawing an existing character of an existing property. And I do enjoy it because it just flexes different muscles.

Cahill: And I don’t know if I find it easy exactly. But I do find it sort of satisfying and something I feel comfortable with, taking the form of the car and extrapolating it into the form of the robot.

Yoshi: Gotcha. There must be a lot of tricks from, you know, having years with tinkering with actual Transformers.

Cahill: Yeah, and some of it is just bullshit, too. 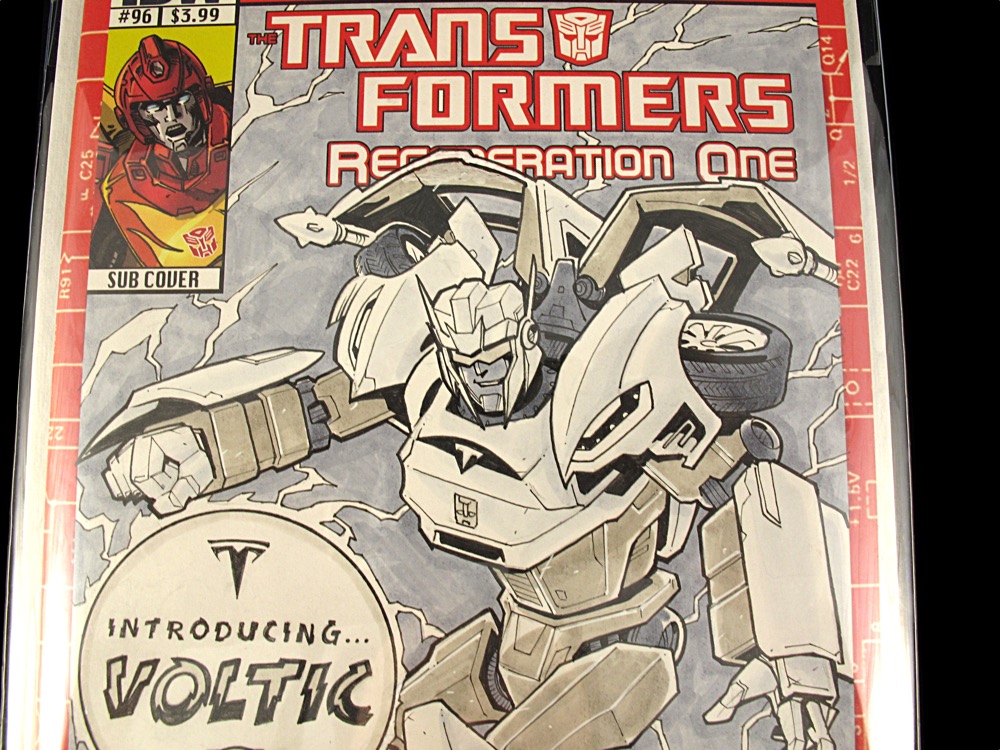 Yoshi: *Laughs* Sure. I know online your adding of rockets got very popular.

Yoshi: Yeah. Here at TFCon, have you gotten a lot of sketch cover requests?

Cahill: No. Not a whole lot. I don’t get a ton of sketch cover requests in general. Most commission requests I get are just on board. Every once in a while, but not that often. 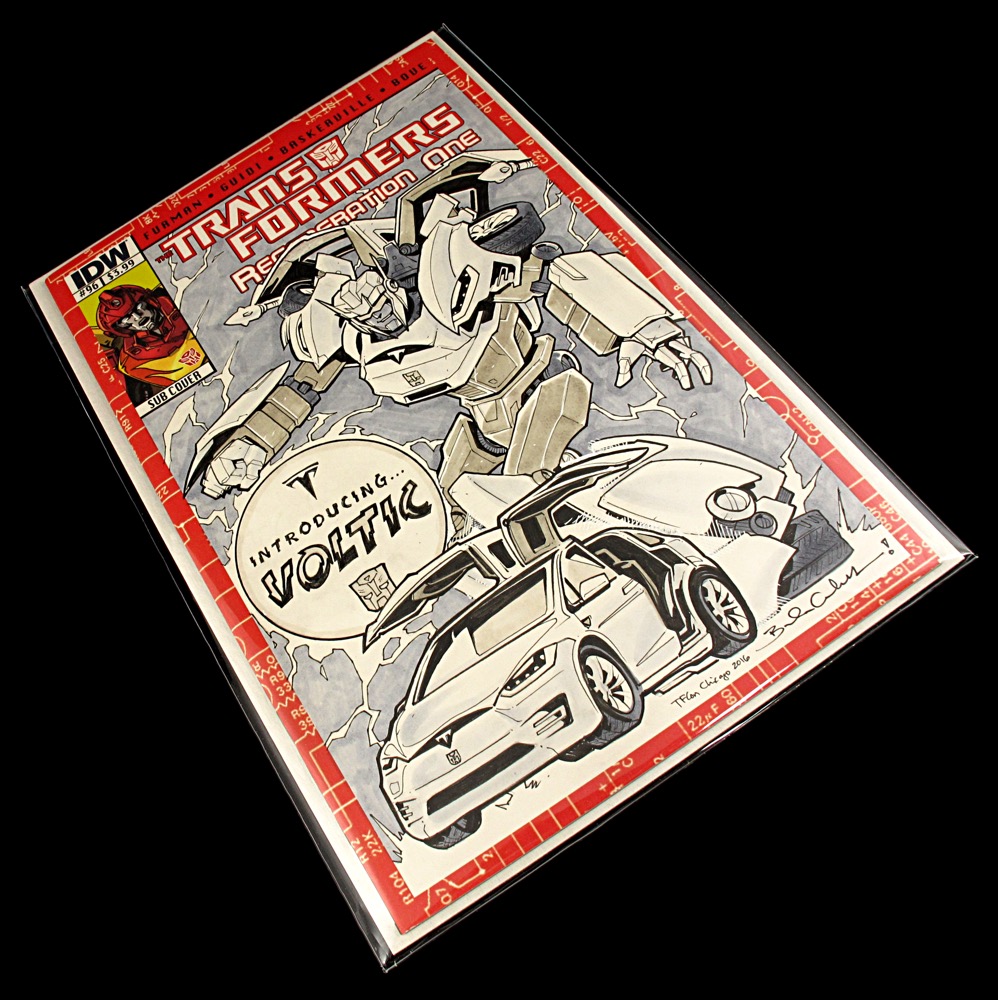 Yoshi: Okay. The way we went about this is that I found you online. I sent the request. I want you to have plenty of time to work on it. If you would work on it ahead of time. Do you prefer that?

Cahill: Definitely for something like this. In this particular case, there is typography on it. You specifically asked for like, “Introducing Voltic” the character. The logotypes and the reference for something like a car. It’s a lot easier for me to get all that stuff at home. Have it all kind of setup. In the case of like the typography, I actually like found a font I liked, laid this out, printed it out, and then put it on a light box, and traced over it so I got the typography really nice.

Cahill: Like, I’m not a hand letter. That’s not what I do.

Cahill: So, for something like this that’s really helpful. I’m comfortable working on stuff here, but if I can do at home. If I have time and I can do it at home before hand, I can always do a better job Just cuz it’s a controlled environment.

Yoshi: I have a little saying. You know the worst thing that could have happened if I had sent this to you is that you would’ve said “no”. 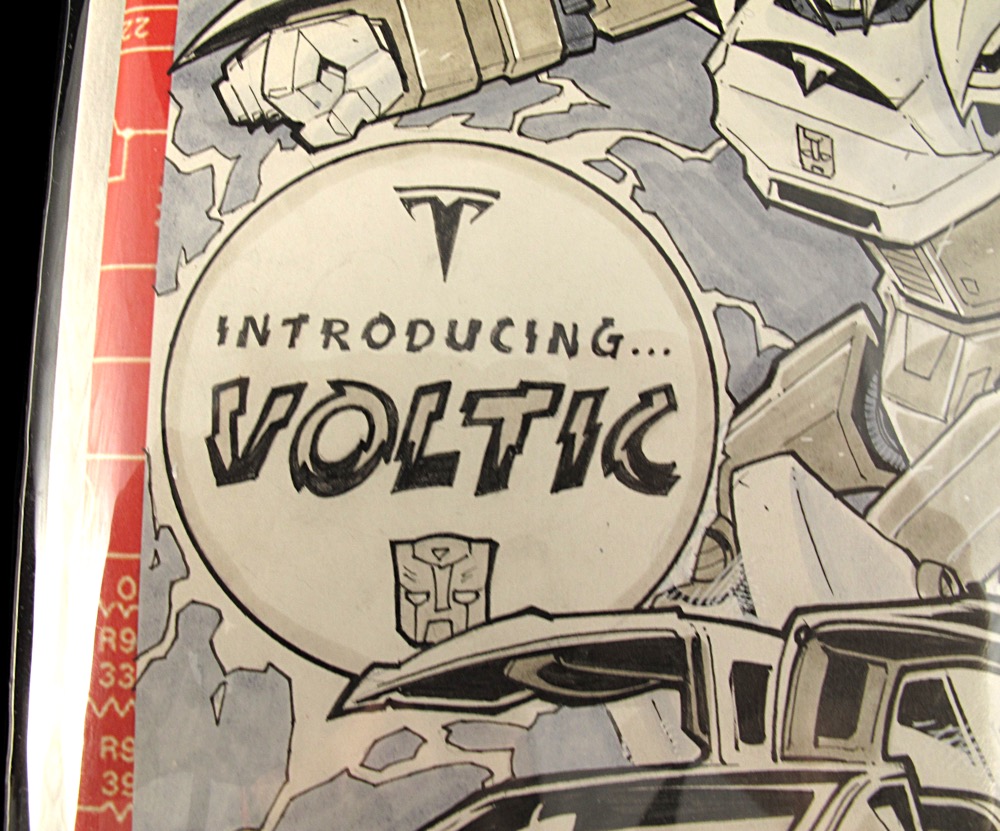 Yoshi: Someone who is coming to you for the first time. What can they expect pricing?

Cahill: The things I most often do at conventions and stuff is for like a bust which is sort of shoulders up would be like $50. I usually do pencils and inks and a grayscale marker so it’s kinda of a nice finished piece. Then, like a mid body, it’s more of a pose you see more of the body it’s more of a structure. Something like that is about $100. That’s usually the only types of things I do at conventions because things that get more complicated take a lot longer and then fewer people can get commissions. So something like that (pointing to my sketch cover), is more than that.

Yoshi: Yes. this is an as come basis. You have to know what the request is.

Cahill: Right. So when it’s full body, that costs more. If it’s multiple characters that cost more. If it’s a combiner that costs more. In this case, it was… You had the full body, plus the vehicle mode, plus the typography and everything. But then it was on a sketch cover. Like if I’d done this on a big sheet of board it would’ve been like $300 or something probably because it would require that much more detail and taken that much longer.

Yoshi: Yes. That leads me to my next question. How do you like working on sketch covers as opposed to just a normal board?

Cahill: I like them. The paper is not as good, but in some ways, it’s actually good because it takes marker better. I don’t know why that is. Like it soaks in more.

Yoshi: I’ve never actually opened one of these that somebody has worked on. Does it bleed through?

Cahill: I don’t think so. Because usually the back is like has a slickness to it that I think stops it. And I mean, while I’m working on it, I put a piece of cardboard between the cover and the rest of the comic just in case.

Cahill: It’s the same with like if someone breaks a sketch book. You put a piece of board underneath, like between the pages you’re working on because you don’t want your marker to go through. 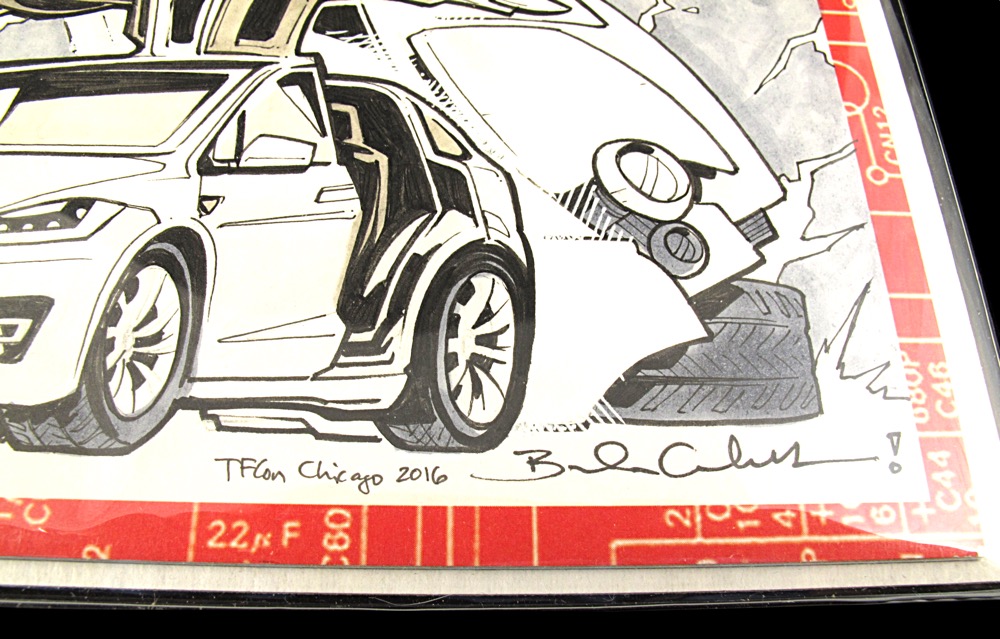 Yoshi: How do people find you who want to get this kind of thing done?

Cahill: Hit me on twitter or e-mail. I have a website that has all my contact information on it and everything. I’m easy to get in touch with and very nice to work with.

Cahill: yeah, and you got me at a good time. Like I often have comics work and a day job doing graphic design. So, I often don’t have a lot of time. But in the run-up to a convention is often when I’ve set a block of time aside to do this sort of thing. So that’s the best time to get me. There is a very good chance that if you get me randomly I’ll say,  “Cool.” and “I’d love to do that for you and I totally don’t have time for a few months.”

Yoshi: Right. But then they are in the queue.

Cahill: Yeah. Yeah, we can always set something up for later.

Yoshi: That’s awesome. Thank you so much for your time.

Yoshi: I really appreciate it.

Cahill: Yeah, good talking to you and I really appreciated this job. It was a lot of fun to do.

Yoshi: It looks great. You have a really great con.

See some other TESLA vehicals I’ve had commissioned to be turned into Transformers.

A Tale Of Two Sketch Covers