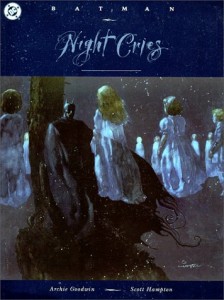 I have just read a graphic novel called “Batman: Night Cries“. This DC Comc’s book that I found the other week at a local used book store was written by Archie Goodwin with art done by Scott Hampton. It uses the graphic book format to spread awareness of child abuse. I can’t help but feel like it falls short in it’s attempt.

The reality is that Batman fans know that he is not out fighting the Joker every night or trading battles of intellect with the Riddler. In between these epic battles, he is fighting everyday crime. Muggings, robberies, vandalism, to name a few.

Night Cries tries to show this with a  child abuse story, and falls short. It falls short because the story feels like it’s trying so hard to get the message out that child abuse is a bigger issue then we all realize. Because of this it takes away from this being batman story and ends up feeling more like a Public Service Announcement. In-fact, Scott Hampton’s art work was the only thing keeping me turning the page at one point.

The book also contains a subplot involving Commissioner Gordon having been abused himself as a child. This gave the book multiple child abuse stories and presented us with a different look at Commissioner Gordon that has never been told in past comics or since. It only adds to making the story that much harder to accept.

You can pass on this book.