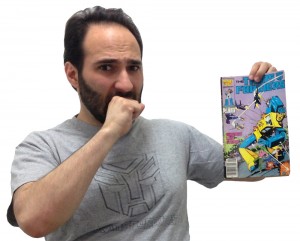 The suggestion was made last week on Reddit that I offer my own opinion on these Transformer comic reviews, rather then just post a synopsis of the story. This week, I will give that a shot. At the end of the synopsis, I will give my thoughts of this issue. I would love to hear your feed back on this and if you all think I should keep it up. Thanks for checking out my post!

In this issue, Bumblebee feels like he is more of a burden then a help to the Autobots and runs away from home. Issue 16 shows Bumblebee, that he is important, but along the way of discovering this the Decepticons try to attack him and use him as a Trojan horse against the Autobots. Before I get into the story lets check out the cover. 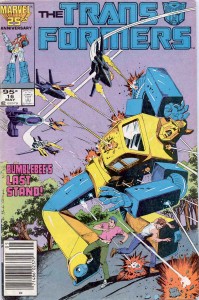 The mostly purple cover with the Transformers logo in blue at the top depicts a scene of Bumblebee being attacked. Several aerial Decepticons, including Shockwave and Laserbeak open fire upon Bumblebee as two humans flee from underneath him. “BUMBLEBEE’S LAST STAND” is written in bold and in a lighter shade of purple so that it pops. This cover clearly is teasing the possible death of this beloved character.

The center of the story behind issue 16 is a Decepticon plan by Shockwave to install a device in Bumblebbe that will allow the Decepticons to control him. They believe they have the best chance to do this with Bumblebee because he is the weakest of all the Autobots.

Outside the ark, Bumblebee is feeling sorry for himself because of how useless he felt during the Autobots last battle. He decides it would be better for the Autobotos if he was less of a burden to them and ran away from home.

While driving away, Bumblebee is located by Laserbeak. The Decepticon alerts his comrades who attack. Bumblebee takes on damage, but still manages to evade the group of flying Decepticons by hiding in plain site inside of a car lot.

That evening a two men, Waldo Dobbs and Ernest, sneak into the car lot and hijack the Yellow Volkswagen known as Bumblebee. Bumblebee, goes along with the two men and finds himself enjoying showing off his driving abilities. Eventually the damage that Bumblebee suffered earlier catches up with him and the Volkswagen stalls out. One of the men tries to repair the vehicle which results in Bumblebee being restored to full operational power. Doing this also alerts the Decepticons, who attack Bumblebee once again.

Optimus Prime and the other Autbots arrive in time to scare off the Decepticons from their attack. The comic book ends with Bumblebee realizing that he belongs with the Autobots and is an important member of the team.

My Thoughts On Issue 16 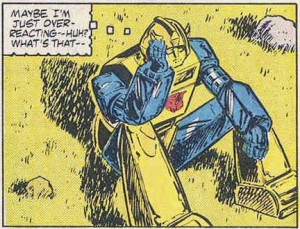 Issue 16 was a very fast read. I think out of all 16 issues I have read up to this point, this issue read the fastest. The idea that Bumblebee feels worthless and runs away from his home comes off as forced and cheesy. I mean, you have a bunch of Autobots who have been fighting this war forever, right? Then, all of a sudden, one of them starts throwing a pity party for himself and runs away from home. It just feels forced.

I am not saying that this is a bad issue. Far from it actually. It just starts off week. I think it is important to remember that these stories where written in the 80s and for kids. If I look at the issue through kids eyes, I can totally accept the whole story very easily. 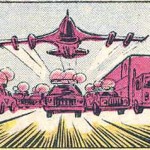 I found myself at the end of the story actually worried if the Autobots would catch up to Bumblebee in time to save him. I experienced a great comic book moment that caught me totally by surprise. That was when Jetfire swooped in at the last moment to save Bumblebee. Then, shortly after the rest of the Autobots joined in. It was really cool and I love those hold-your-breath moments. 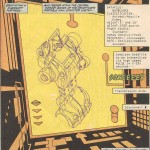 As far as the art goes with this issue, the cover is nothing special to me. On the first page it looks like art was uses from the Bumblebee toy to show a wire frame version of him on a computer screen. There are of couple of panels I thought where very well drawn including the Autobots watching TV and when the Autobots appear to save Bumblebee.

No New Ads This Issue.

No Letters This Issue.