Hannah and I woke up early and eager on Friday so we could attend the PAX keynote address and meet up with our good friend Lyle. The Keynote was taking place at Benaroya Hall and featured Warren Spector as the keynote speaker. His speech was filled with his insight on games and the gaming culture. He stressed that we should welcome new gamers into our community and help them discover this wonderful art form. That the only way gaming and the gaming culture can survive and thrive is by welcoming the masses into our “tribe” and to allow the mainstream to embrace gaming rather than fear it.

When Warren Spector finished with his entertaining keynote presentation, Gabe and Tycho of Penny Arcade took the stage of the great hall for a Question and Answer period. It was a funny and informative Q&A session as the two answer questions about Penny Arcade, PAX, and games in general. At one point an older gentleman came up to the Q&A mic and politely asked if either Gabe or Tycho had any bubblegum. Gabe and Tycho kind of looked at each other funny and then finally said “no”. Then in the iconic Duke Nukem voice the man said “Well, I am here to kick ass and chew bubblegum, and I am all out of bubble gum”. I remember the reaction to everyone in Benaroya Hall just being “That was really cool”. It would not be till later in the day that I would realize why that gentleman was even there.

At the end of Gabe and Tycho’s Q&A we made our way back out to the streets of Seattle and to the convention center where we went right to the exhibit hall. The first time you walk into the main exhibit hall you’re flooded with flashing lights and random sounds that are quite overwhelming at first. It takes a moment to process what is going on and where it’s happening. There was just so much at first it was almost like sensory overload, but in a good way.

Walking through the convention center’s main gaming exhibit hall you find yourself surrounded by games. Mostly computer or condole games, but the occasional and refreshing table top game is on display as well. Some of the game titles that jump out at you when you’re walking around are ‘Little Big Planet 2’, ‘Portal 2’ ‘Mortal Kombat’, ‘Swarm’, ‘Halo Reach’, ‘Infamous 2’, and ‘Duke Nukem Forever’. When I saw the Duke Nukem Forever sign I understood that the guy at Gabe and Tycho’s Q&A panel was the voice actor for the new Duke Nukem Forever video game.

Feeling somewhat overwhelmed, Hannah, Lyle and I slowly walked through the entire exhibit hall and gravitated to the Wizards of the Coast Booth. The booth was awesome with a little more than half dedicated to Magic the Gathering and the rest dedicated to Dungeons & Dragons. A wall was setup to show off unreleased products like Magic cards and new D&D miniatures. On the Magic side of the booth two tables where setup to teach people who to play Magic and two computer/gaming stations where setup to show of the Magic The Gathering video game. The other side of the booth was setup with an area for live action D&D to teach people how to play.

I was supposed to meet with some people with Wizards of the Coast on this day for some interviews and a demo of the Red Box. With some time to kill before I was to meet  Hannah, Lyle, and myself decided to try out the live action D&D training. We got in line and quickly made our way to the front where a Gentleman presented us with pre generated character options. The character options were laid out on a table before us in the form of two-sided laminated cards that would hang around your neck from a lanyard. The characters were simplified for the purposes of training, but that did not mean you where going to win the demo. The two groups that went before Hannah, Lyle and myself where both slain by the dragon! 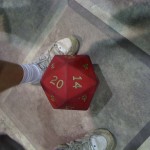 When the three of us walked onto the life-sized battlemat to fight the dragon we didn’t know what would happen. We each took our turn and we each managed to deal a blow to the beast. Some of us got really lucky and rolled some critical hits. In my case I rolled two crits in a row for my Rouge and we where able to vanquish the dragon. The three of us got a button to pin on to ourselves that said “Monster Slyer”. For our critical hits we also got tokens that allowed us to claim other prizes.

From the Wizards of the Coast booth we made our way down stairs to an area called the Hidden Level which housed the a large area for Magic the gathering and Dungeons & Dragons play. D&D players where able to join a random dungeon delves or partake in A dark sun arena battle. Magic the Gathering players where able to just play or partake in a “buy-in” game. Hannah found this useful for learning how to play magic for the first time. 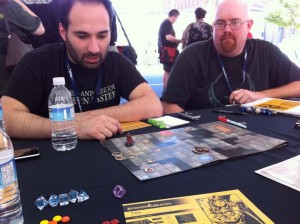 My Shirt Says "Who Died and Made You Dungeon Master?

After exploring the hidden level we made our way back upstairs to meet with some people from Wizards of the Coast. I had the chance to speak with a D&D game designer and play a game out of the Red Box with one of the game developers by the Dungeons & Dragons bus! I will be writing more on this experience in a future post.

As morning turned to afternoon, and afternoon turned to evening Lyle, Hannah and myself found a place to eat dinner. It gave us a chance to talk about the days events and do a little planning about for the next day. 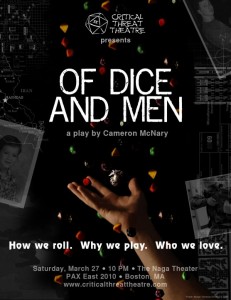 After finishing dinner we headed back to the expo hall to attend the play “Of Dice and Men”. We where lucky to even be able to attend this play. We gave ourselves a good hour, hour and a half to get in line. When we got in line however, we learned their where only 40 spots left in line. We waited in line while Hannah played Pokémon Silver on her Nintendo DS and traded Pokémon items with other poke ball wearers in line.

The doors finally opened for the play and the long line of people waiting to attended made their way in through the doors and found their seats. The play was really good and put on by some really great actors. You would be cheering one moment and gripping the edge of our seat just waiting to see what happens next.

When the play was finished we headed outside. Lyle caught the bus to go home for the night and we made plans to meet the next day. Hannah and I dropped some stuff off at our hotel room and then headed right back to the convention center. By this time the expo hall was closed, but that did not mean people where still not having fun and playing games. As we walked back to the convention center we found people in line to play Rock Band 2. I have to admit that some of the performances were rather good. The two floors of the expo hall that still had activity were dedicated to board gaming and make shift stores selling everything from board games to t-shirts. One room would be filled with people playing games like Carcassonne and Axis & Allis, while another room would be filled with people playing Magic the Gathering, Zombie Dice and Munchkin. They even had a room to check out games to play. Pretty much anything you could think of was available for check out.

Still another room was filled with bean bag chairs where people could talk, play games, check their e-mail, etc. It was a very relaxed and fun feeling everyone had. It was at this point however that I wish I had brought some of my Dungeons & Dragons material to run a game with. Hannah had some pre made characters all ready to go and I was in a mood to observe other Dungeons Masters, but no one was really playing Dungeons & Dragons in these rooms. It was a this point that O made a mental note that If I attend PAX next year I was going be prepared to run my own D&D game.

Hannah and I spent the next few hours walking around and just taking in all the gaming awesomeness that was around us before we headed back to our hotel to call it a night.