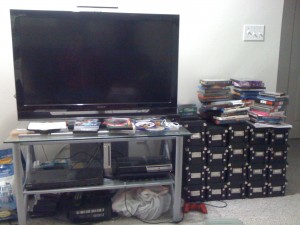 I own a lot of DVDs. We are talking nearly 500 at last count. It’s sick, I know. Sifting through them all to find the one movie I want to watch has become such a chore that I would rather just fire up my Playstation 3 (PS3) to access my Netflix account and stream something then dig for a DVD of a movie I actually want to watch. So, I have decided that the solution to my conundrum is to setup a Media Center PC. More specifically a Mac Mini media center attached to my T.V. with an interface that even my mother could use.

WHAT DO I WANT THE END RESULT TO BE?

Like any project you should do research into it first. Which is what I did. With google as my guide I sought out other peoples experience with setting up a Mac Media Center. Here are a list of some sites I found that where helpful to me.

I also spoke with friends of mine who had done similar projects. It always helps to read, write, and talk to people about ideas you have. It helps flush out the details of what is trying to be accomplish.

All of these sites listed above where very helpful to me, but none where setup quite the way I wanted. Most of these talked about just using the Mac Mini or the Mac Mini with an external hard drive attached and honestly that probably is the solution for 90% of you out there. But I was looking for a setup with a little bit more free hard drive space for me to use. Particularly because I have several computers in my house and I want them all to be able to back up wirelessly to on location. I also enjoy editing home movies and having a place to store the massive video files I work with is important to me. I think I have come up with a solution that works as you will see.

Most people building a Media Center PC are doing so to encode their DVDs onto a hard drive. If you where just to copy the DVD over to your hard drive your looking at something that takes up anywhere from 2 to 8 gigs of hard drive space. When you encode a DVD onto your hard drive you have the option of removing all the special features, menus, audio commentary, subtitles, and non-english audio tracks leaving you with just the movie. What this means is no more waiting through previews, FBI Warnings or other types of bullshit that is preventing you from watching the movie you want to watch. You just get the movie and your left with a much more manageable file size.

One free peace of software I read about and that everyone pretty much agreed is the best DVD encoding tool is called HandBrake. Before dropping a single penny on my media center I could preform tests to make sure the video is going to look great and be a manageable file size. I downloaded Handbrake and picked a DVD off my shelf at random and encoded it. Using only HandBrake’s presets I found that encoding under the “High Profile” preset rendered out a 1.5 GB file. Playback of the DVD and the encoded movie showed hardly any noticeable difference. It certainly looked a lot better then any Netflix movie I had streamed in the past. If I take the 1.5 GB as an average and multiply that by 500 (the number of DVDs I own) The end result is 750 GB. A very manageable figure.

It’s a very manageable figure till you miss calculate TV shows like I did.

At the time of this post I have encoded several movies and TV shows using Handbrake. Something I over looked is that the average movie is anywhere from 1 and a half to 2 hours, give or take per DVD. Now lets take E.R. on DVD. The DVD for E.R. holds 4 episodes at about 1 hour each. You have 24 episodes a season and that is roughly 24 hours of video which ends up being a little under 1 gig an episode. It adds up! It was something I over looked when I did my initial estimation of how much hard drive space I would need. Don’t let that catch you off guard like it did me. Do the math right so you know how much hard drive space you are going to need to hold your DVD collection.