As I hold G.I. Joe 142 in my hands, I hope against hope that this issue will be enough for me to forgive the last two. I mean… doesn’t Marvel have to pull out all the stops to impress the reader so they want to buy the new Transformers: Generation 2 ongoing comic? I mean if they didn’t, does that mean they just didn’t care? Does it mean that maybe Marvel was stretched too thin in the early 90s? Well, lets quit speculating and jump on into this issue. But first, let’s talk about the cover. 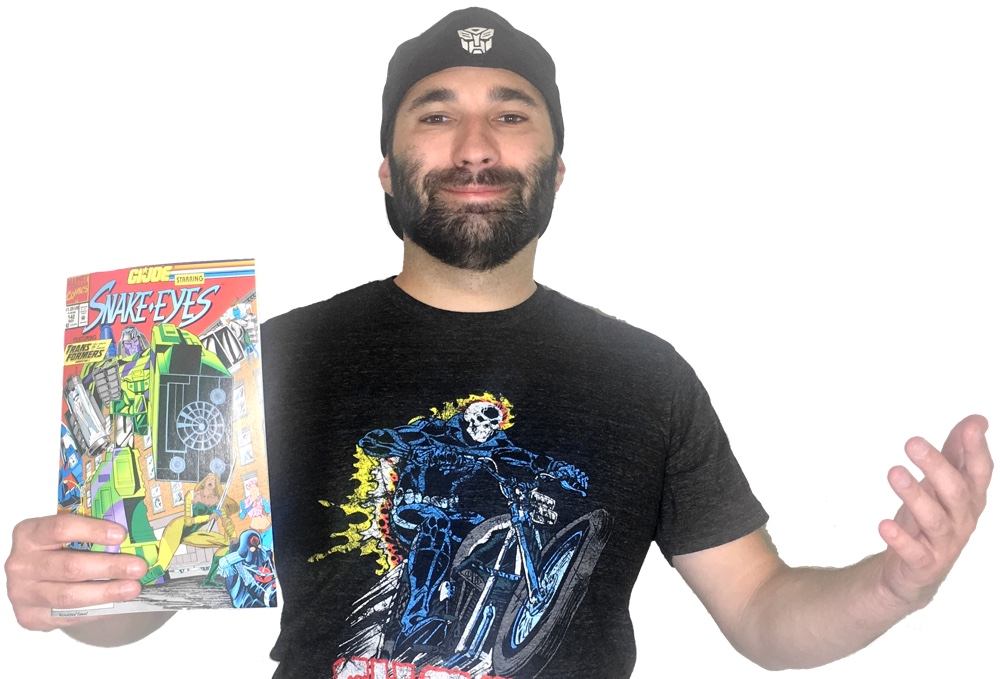 In the 90s, I was so starved for Transformers that it didn’t matter that this cover was crap. The passage of time has sadly given be a keener eye when it comes to comic book artwork.  This cover just hurts to look at. Of the four, I like this one the least or hate it the most. It’s as if the artist was not at all interested in drawing robots, but even his human work lacks something to be desired. I hate to be negative to people who do this for a leaving. People who have more artistic talent in their pinky finger than I do in my whole body, but still this cover really falls short of being beautiful. Even the colorist seems to have not cared as the colors are just dull. The whole thing is just undesirable. 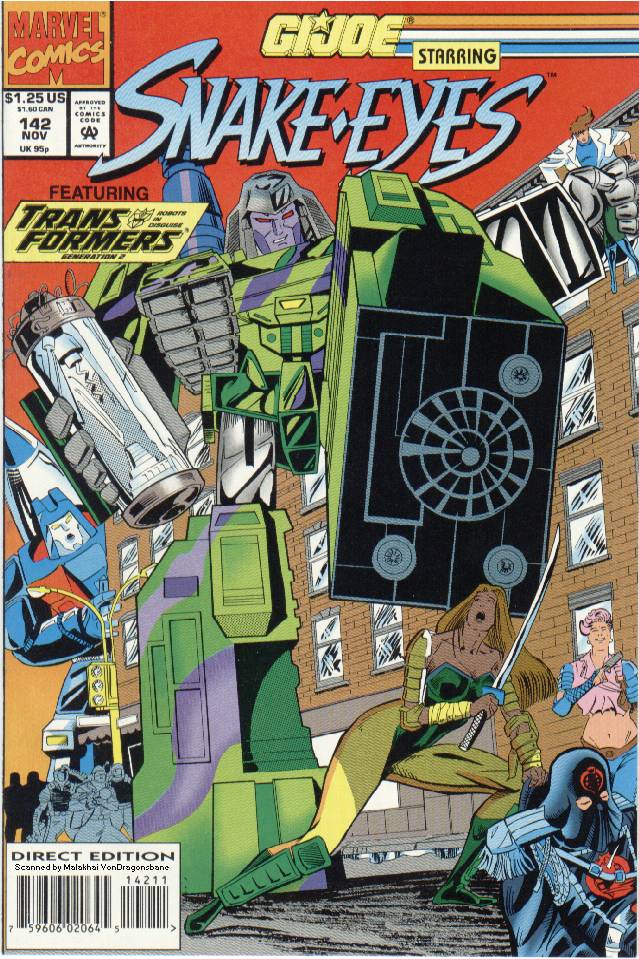 The Autobots have arrived and are advancing on Megatron in what ends up being a less than successful attempt to bring the Decepticon down. SteelJaw is dispatched, Skydive is put down, Chase is hurt, and so on. Megatron is much harder to beat than the Autobots anticipated. 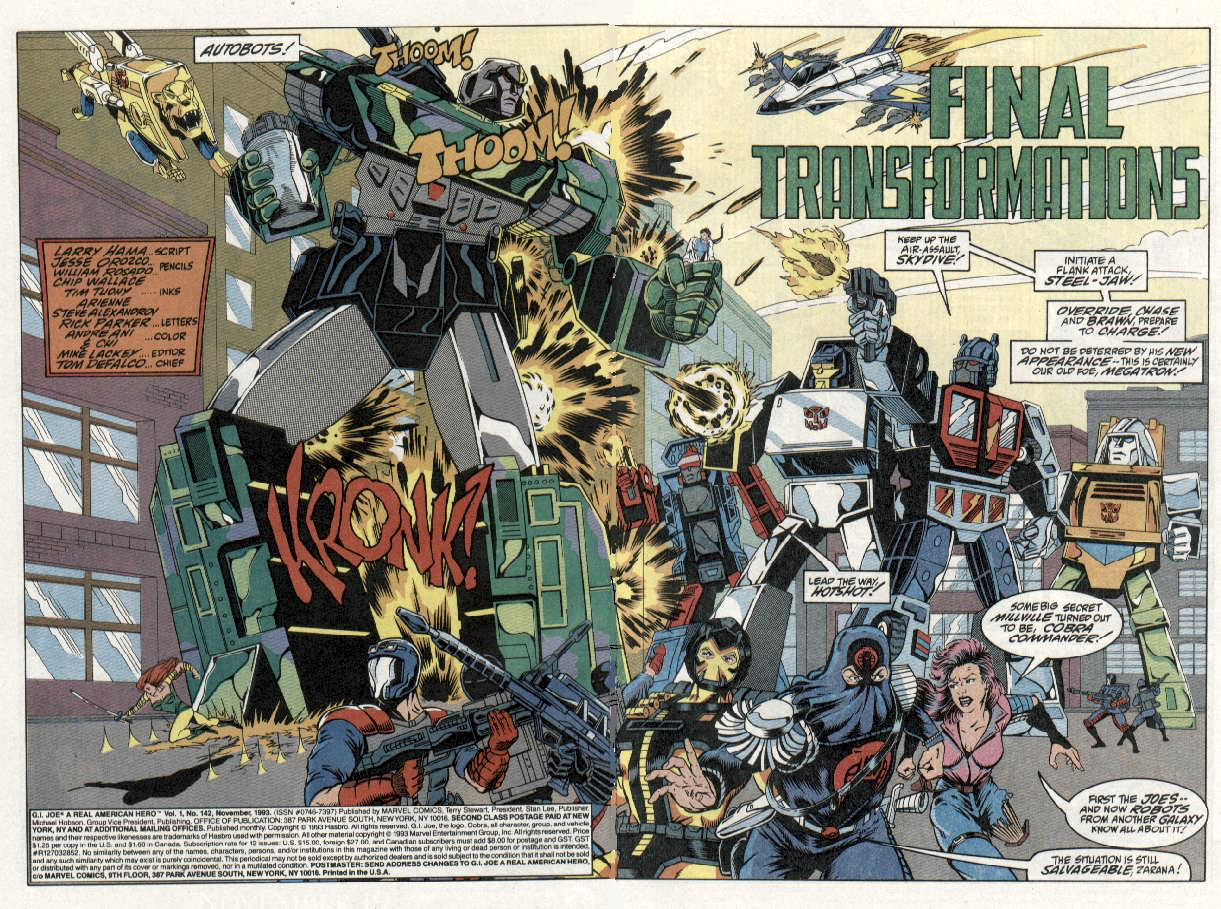 The Joe’s are involved here too. Scarlett takes out a Viper and Cobra Commander retaliates by jumping her. She deals with him easily enough by putting his face to the asphalt. Snake-Eyes winds up between a rock-and-a-hard-place, but Cobra learns the hard way that grenades always win.

Back to the Autobots. Brawn, who is standing watch over their interstellar transport, sees a chance to take out Megatron. Using his opportunity turns out to be futile as Megatron’s new abilities are simply too powerful for the Autobot. Megatron causes a neutron implosion that takes out the ship and Brawn both. With only three Autobots

With only three Autobots a new plan is formed. With aid from Joe’s Spirit and Storm Shadow, the small team deactivate Skydive and truck him into the Ark. Unknown to them at the time, Spike Witwicky has hidden away within the cargo. Override helps by providing a diversion. On that results in Biggles-Jones escaping from Megatron.

Once Biggles-Jones realizes that Megatron will not pursue the Joes for as long as it takes to capture her again, she submits to Megatron to save everyone else. An act, that for her, was inspired by Overrides sacrifice.

Megatron now boards the Ark. Cobra Commander cries out that he is still owed technology from Megatron as the Decepticon departs. We end this issue with Megatron impressed with Biggles-Jones attempt to infect him if a virus encoded into his rail gun operating system. He feels he can utilize her genius.

POSTBOX: THE PIT! LETTERS THIS ISSUE. 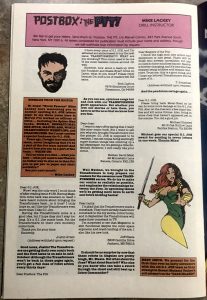 Dear G.I. JOE,
Wow! was the only word I could think of after reading issue #139. Having Megatron come back was excellent in itself. I have heard rumors about bringing the Transformers back…is it true? I truly hope so, as I like the Transformers even more than I like G.I. Joe.

Thank you for your time.
Sincerely,
Justin Grtelt

Good new, Justin! The Transformers are getting their own comic book and the first issue is on sale in mid-October! Although the Transformers won’t be back in these pages again, you’ll get a full dose of robot action every thirty days!

Dear Postbox: The Pitt
I have every issue of G.I. JOE, and I’m ashamed and embarrassed to buy the next issue. TRANSFORMERS?!?! WHAT are you thinking? This comic used to be one of the most realistic comics around. Oh well.

However, How about a team-up with the Punisher and Snake-Eyes? Come on Larry, what do you think? Please reply because I’ sure a lot of readers feel the same.

As you can see, opinions range hot and cold with our TRANSFORMERS guest appearance. But whether you love our stories or hate them, you have to write us so that we know how you feel.

I want to start off by saying that I really like your comic book. But I want to ask you why you brought Transformers into the picture. G.I. JOE is supposed to be realistic. I can see ninjas doing seemingly super-human things like climbing up a tall skyscraper, but it’s getting a little far-fetched. However, I still really like your comic.

Well Nathan, we brought in the Transformers to help prepare readers for the awesome new TRANSFORMERS series. We do try to make our comics as realistic as possible and emphasize the relationships between the Joes. In upcoming issues, we’ll be getting more down to earth and Cobra kicking basics!

I’m surprised to see that Megatron is still functional despite the outer space explosion and crash landing of the ark. I also like his new look.

It should be no surprise by now that these robots in disguise are pretty tough, Mr. Steele. But what about the Joes? What about Scarlett? Who else do you know who can take a sword through the chest and still beat up a Cobra Commander?

Dear Keepers of the Pitt:

I think the high-tech new armor and equipment is just great. There will be those who scream unrealistic, but pay no heed to their mindless banter. reality is forever changing, and it’s time the Joes stopped being soldiers and became warriors. Trust me this is a good thing, and I hope my beloved Transformers will be a part of it…

And the pendulum swings again…

Please bring back Metal-Head so he can do some more damage at the G.I. JOE Pitt. Also let the Joes win a few major battles and kill some Cobras. Also, bring in some Joes that haven’t appeared yet in the comics. You did a good job.

Michael gets our special G.I. JOE award for sending in seven letters in one week. Thanks, Mike!

MY THOUGHTS ON THIS ISSUE

This issue is a weak finish to a cross over that had a strong start. I’m truly left scratching my head and asking, “What the hell happened?” This issue, story wise, was the weakest of them all.

I can read these books through the eyes of nostalgia and love them. And I do love them. It’s when I turn my brain on I see the faults. As a kid, I would read these books, good or bad, and just happily roll with whatever story was put in front of me because I love the Transformers so much. It was an adventure I got to ride along with. Not the best. But hey, the Transformers are back and getting their own book. Transformers: Generation 2. I can’t wait!